At 8-12, the Mariners are tied with the Angels for last, thanks largely to a 1-3 series loss to the A’s in Oakland, salved somewhat by an 11-1 walloping Sunday that included a Taylor Motter grand slam. 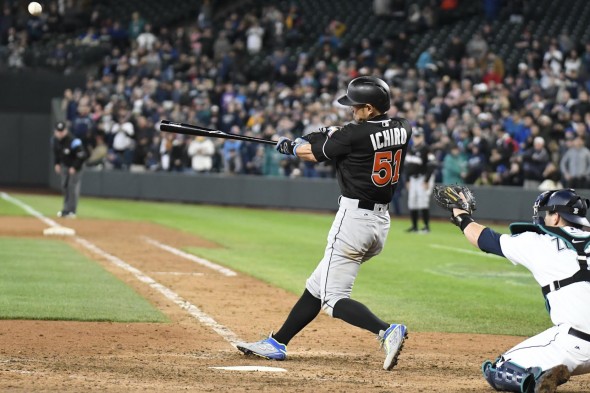 Ichiro homered Wednesday in what might have been his final at-bat at Safeco Field. / Alan Chitlik, Sportspress Northwest

The Mariners went 2-1 against Miami at Safeco Field to begin the third week of the season, and had an opportunity to move into second place in the AL West by winning Thursday in Oakland. Didn’t happen. The Mariners dropped three before routing the Athletics 11-1 Sunday (box) with their biggest inning of the season. But that couldn’t keep Seattle (8-12) out of a share of last place in the division (standings). How the week unfolded:

Monday (Mariners 6, Marlins 1): Robinson Cano and Nelson Cruz had consecutive first-inning homers and Ariel Miranda pitched seven scoreless innings as the Mariners (6-9) extended their winning streak to four after starting the year 2-8. Taylor Motter added his third home run and Mitch Haniger stretched his hitting streak to 11 as Marlins reserve outfielder Ichiro made his first visit to Safeco Field as a member of the 3,000-hit club.

Wednesday (Mariners 10, Marlins 5): Haniger collected three hits, reached base five times and knocked in four run as the Mariners (7-9) took the series. Ichiro knocked a solo home run on the first pitch of the ninth inning in possibly his final at-bat at Safeco Field.

Thursday (Athletics 9, Mariners 6): Trevor Plouffe ripped a three-run homer in the seventh and Ryan Dull (1-1) pitched 1.3 scoreless innings as the Mariners dropped to 7-10. Seattle starter James Paxton’s scoreless innings streak to begin the year ended at 23 when Oakland tallied three in the third. He struck out eight over 4.1 innings.

Friday (Athletics 3, Mariners 1): Plouffe and Yonder Alonso homered off Hisashi Iwakuma as the Athletics rallied from a 1-0 deficit. The Mariners went 0-for-7 with runners in scoring position, and dropped to 1-8 on the road. The Mariners fell into a tie for last.

Sunday (Mariners 11, Athletics 1):  Motter highlighted a six-run third with a grand slam and the Mariners snapped a three-game losing streak. Nelson Cruz hit a three-run homer.  Yovani Gallardo allowed one run over 6.1 innings for his first win of his Seattle tenure.

Had Oakland swept the series, it would have been its first over Seattle at the Coliseum since Sept. 10-13, 1992, when Bill Plummer managed the club.

A Seattle icon from 2001-12, Ichiro received a standing ovation in his first appearance at Safeco Field since 2014. He collected another standing O Sunday when he homered.

Had not Haniger disrupted Miami’s no-hitter, the Mariners likely would have been no-hit for the fourth time in franchise history. They were also no-hit by Mark Langston and Mike Witt of the Angels April 11, 1990 in Anaheim, by Dwight Gooden of the Yankees May 14, 1996 in New York, and by Philip Humber’s 4-0 perfecto at Safeco Field April 21, 2012.

Innings of the week

Mariners 1st Monday: Cano and Cruz hit back-to-back homers, the second time they had done that as Seattle teammates (also Sept. 20, 2016 vs. Oakland).

Marlins 9th Wednesday: While it’s hard to upstage a three-hit, four-RBI performance (by Haniger), Ichiro managed the feat with one swing when he jumped on a first-pitch Evan Marshall fastball that had just enough to clear the fence in right. It was Ichiro’s first road home run since May 10, 2013.

Athletics 1st Saturday: Coming off seven scoreless innings, Ariel Miranda served up a home run to Adam Rosales on his third pitch of the game, and gave up another homer to Healy two batters later.

Bad: After opening the season batting .111 (6-for-54), Leonys Martin was benched during the Oakland series, then designated for assignment prior to Sunday’s game. 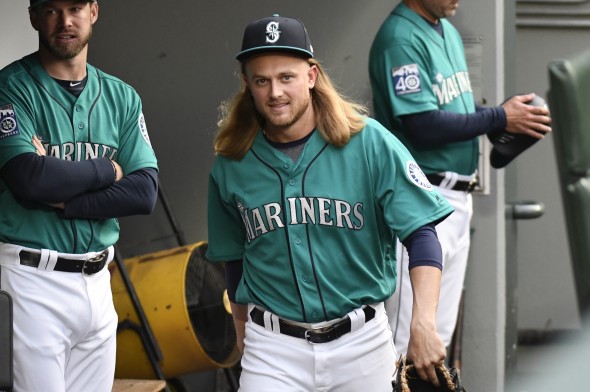 “Great outing by Ariel tonight. He pitched much different tonight than last time out. Last time out, he threw a lot of off-speed pitches. Tonight he was very aggressive with his fastball. Great to see him really in control of the game.” – Manager Scott Servais

“It’s a big deal we aren’t on the news tonight. We would be all over the place.” – Cano, after the Mariners avoided getting no-hit

“It was my last at bat, obviously, and the last chance. With the way the game was going, that’s what I wanted to hit, right there. Saw the ball go over the fence and I have to pinch myself to make sure that really happened. I feel grateful.” – Ichiro

“It was just simple. I wasn’t locating the fastball well and the off-speed stuff wasn’t getting over for strikes. I really wasn’t able to execute my game plan the way I wanted, which equaled them getting some hits and putting some runs on the board.” – Paxton, after the Athletics ended his streak of 23 consecutive scoreless innings

The Mariners play three in Detroit (10-8) and three in Cleveland (10-8) before returning to Safeco Field May 2 to host the Angels. The Detroit series gets underway at 4:10 p.m., PT Tuesday. Hernandez throws for the Mariners opposite Jordan Zimmerman.