Alleviatng worries about an under-performing offense and a slow start to the season, the Sounders Sunday bullied the Galaxy on their own SoCal turf for a 3-0 win. 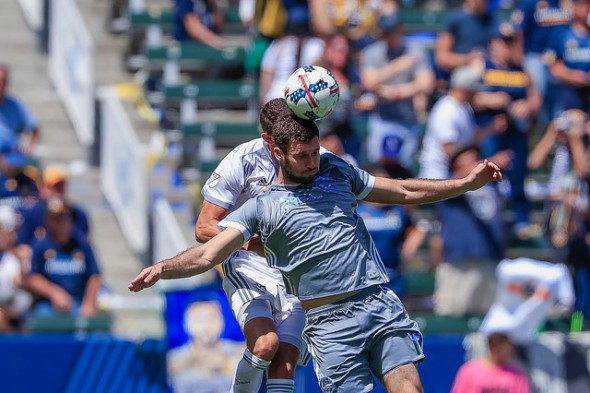 A trio of goals in 15 minutes of the first half gave the Seattle Sounders rare dominance over the Los Angeles Galaxy at the StubHub Center in Carson, CA., Sunday. The 3-0 victory eased the hand-wringing over the club’s under-performing offense. Clint Dempsey and Jordan Morris found the net, supplemented by an Ashley Cole own goal.

The win was historic for Seattle (2-2-3, 9 points). Thanks to a 4-2 win over the Galaxy  Sept. 25 that helped push the Sounders close to the playoff berth that led to an MLS Cup, the club has won consecutive road matches against LA (2-5, 6 points) for the first time in franchise history.

Both matches were eruptions for Seattle, ending streaks where it struggled. Brian Schmetzer was pleased.

“In Vancouver, we had control of large parts of the game, but we didn’t reward ourselves for the hard work,” the Sounders coach said. “They rewarded themselves for the work they do during the week —  the belief in how we train, why we train.”

The shift was prompted by a lineup change that benched left winger Harry Shipp in favor of starting Will Bruin at striker, while Morris was moved to Shipp’s position. The change allowed the Sounders to use Bruin’s 6-foot-2 frame to hold up play and allow for greater possession in the attacking end.

Seattle completed 83 percent of its passes in the final third, highest tally by any team in the league since in-depth analytical data has been tracked.

Dempsey’s goal came in the 29th minute, when Nicolas Lodeiro served up a cutback cross from the end line left of the net. Dempsey drifted to the back post, losing defenders as he won a free header and an easy conversion for his third goal of the season.

Cole’s blunder came six minutes later, when the Sounders pushed the ball up the left side of the field before Joevin Jones swung in a cross on the ground. Cole slid in hopes of knocking the ball out for a corner, but instead poked it into his own net.

Morris, who scored twice in the September victory, collected in the 44th minute, calmly finishing a right-footed shot through the armpit of keeper Brian Rowe after Dempsey played him into the box and the Galaxy back line failed to close the gap.

The Sounders fielded a ragtag back four, missing starting center backs Chad Marshall and Roman Torres to injury. Tony Alfaro and Gustav Svensson took their places, while third-string right back Jordy Delem started due to injuries to Brad Evans and Oniel Fisher.

Despite the odd assortment, the back line held firm, marking Giovanni dos Santos and Gyasi Zardes out of the match and preventing Los Angeles from establishing any momentum.

For Schmetzer, the match was a return to form rather than a reversal of fortune:

“We weren’t really worried (about the slow seasonal start) even though the results weren’t good. It’s not like the truck was completely stalled on the side of the freeway. We were still going in the right direction. We just needed to clean some things up, and today we did.”