Seahawks GM John Schneider is trying to be casual about the possibility of trading Richard Sherman, but he also knows that as the draft approaches, it does panicky things to NFL teams. 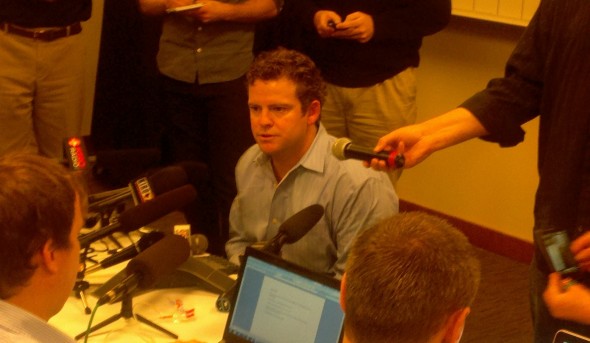 For those Seahawks followers weary of the Richard Sherman trade story, here is what general manager John Schneider said in his annual pre-draft media briefing Monday at team headquarters:

“Right now we kinda moved past it.”

Well then, that’s it, right? Not exactly.

“If somebody calls and goes crazy with something, we’ll discuss it again,” he said. “At this point . . . I don’t mean, ‘Go crazy,’ but you know what I mean — if somebody gives you compensation where you truly have to consider it, then we’d consider it.”

So, John, why would you even consider trading one of your cornerstone players and one of the best in the game?

“We would consider it because it’s been a mutual thing,” he said. “It’s OK. We feel like it would clear cap room and we’d get younger. That’s the only reason we’d do it, I guess. One of the top cornerbacks in the league — you don’t just give them away.”

So it has nothing to do with Sherman’s search for “a spark,” as you said on ESPN 710 radio Thursday?

“First and foremost, it’s most important for you guys to know we pride ourselves in having an open dialogue with our players,” he said. “Everybody needs a spark — maybe spark isn’t the right word, but maybe a little re-set. We all do.

“I know after the draft, I’m gonna have a little re-set, look back and evaluate the whole season, how we prepared for free agency and draft. With him, it was very much the same thing. After the season. It was like, hey, I wanna to get back to be where he feels like he could be . . .  not just him, he’s talking about the whole team.”

But wouldn’t this be unprecedented for the Seahawks, talking publicly about trading a star, then pulling back?

“I can see why you would think that,” he said, “but within these walls, no.”

What needs to happen if Sherman stays with the Seahawks?

“I think it’s just time,” he said. “The season just ended. Just time. Time heals all wounds. or whatever.”

Why not adopt your usual covert tactics when it comes to potential trades?

“People say, ‘Why do you have your business out in the open?'” he said. “Basically, it was already out there. People had been talking about it. Rumors about it. We have had conversations with teams. But he’s in a good place. He’s here today, working. Earl (Thomas) is here. Kam (Chancellor) is here. We’re all in a very good place. If it works out, it works out. If it doesn’t work out, it doesn’t work out. Everybody’s OK with it.

“He met with Pete (Carroll), had a really great conversation. So it’s been about, like, he may see it as a fresh start for him. We may see it as a way to clear cap room and get younger. Neither side is super-urgent about it, if that makes sense.”

No, on the surface, all the maybe-this, maybe-that seems odd.

Then again, if Schneider’s job is to get the best possible deal for the franchise, perhaps the prevarication and dissembling are part of the strategy.

The Seahawks can’t be seen to be eager to rid themselves of Sherman after his sideline outbursts toward coaches last season that would have qualified as insubordination on other teams. Nor can Sherman be seen as a stubborn hothead, adamant about leaving a team where he was allowed to flourish perhaps like nowhere else.

So the public face is a casual, business-as-usual posture. It also seems both sides want it to happen, but not at any cost.

So with the imminence of the draft at 5 p.m. Thursday, the parties know each hour ratchets up the pressure for some team to go crazy-not-crazy.

In the world of the NFL, where margins between success and failure can come down to a single tipped ball (where would the Seahawks and 49ers be today if Sherman hadn’t knocked away the pass in the end zone to Michael Crabtree in the 2014 NFC championship?), urgency to bust a big move is often irresistible.

The Seahawks know the game well. Recall the trades for RB Marshawn Lynch, WR Percy Harvin, TE Jimmy Graham. All different from each other and Sherman, but all high-risk walks on the tightrope.

If you don’t have the stomach for crazy-not-crazy, stay away from the circus.