Thiel: OL or CB? Tough call for Seahawks in 1st 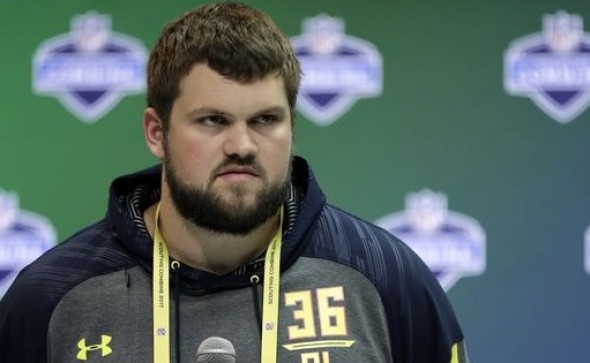 Ryan Ramczyk of Wisconsin may be the guy that fits GM John Schneider’s dreams for an offensive lineman. / NFL.com

He didn’t yell at anyone to get off the Clink’s artificial lawn, but John Schneider did sound a tad cranky when talking about how the darn kids play college football these days.

“When you watch college football, the majority of it looks more like basketball on grass,” the Seahawks general manager told reporters Monday. “Things are just not quite as clear as they used to be, and that’s just my personal belief. There’s not a forest of offensive linemen trees out there that you can just run out to the back yard” and pluck a couple of big’ns.

Even though it seems as if the Seahawks have needed good offensive linemen since the days when clams could be dug from the pristine estuary of the Duwamish River, they have had a top-four rushing game in each the four seasons prior to 2016.

The falloff to 25th — the 99 yards per game average was the worst in the Pete Carroll tenure since the first year of 2010, 31st at 89 ypg — exposed a truth: The retirement of Marshawn Lynch and the injury limitations of Russell Wilson made plain that the run success of the previous four seasons was about their transcendence more than the prowess of the O-line.

For much of 2016, the Seahawks had the audacity to start on the line two rookies, a third with one previous start and two young veterans who had changed positions. Only C Justin Britt was NFL-average or better. In hindsight, it was a tidy miracle that the Seahawks finished 10-5-1 and won a playoff game with Wilson still ambulatory.

“We’ve talked about us going a little bit too young, probably,” said Schneider of the 2016 line. “That’s something with our self-scouting we’ve addressed internally.”

He didn’t mention the name of the “internals” to whom he gave a blindfold and cigarette before being fired upon.

But really, it’s Schneider, Carroll and assistant Tom Cable who were accountable for thinking first-round pick Germain Ifedi was ready to start in the NFL, that Bradley Sowell and J’Marcus Webb were adequate fill-in free agents, and that rookie George Fant was able to transfer from basketball power forward to football left tackle with a minute and a half of serious practice.

So when Schneider and Carroll say nice things about OL free agent signees Luke Joeckel and Oday Aboushi, Seahawks fans are free to stow their eyebrows in the upright and locked position.

At the moment, it appears that Joeckel, a four-year veteran, will start at left tackle. Ifedi will be moved from right guard to replace Gilliam, who was readily sent on his way when the restricted free agent was offered $1.4 million in guaranteed money from the 49ers.  Aboushi will slide in at right guard.

In a rare burst of continuity, Britt and RG Mark Glowinski will be back at their spots.

So it could be said that the Seahawks are set in the O-line. Then again, the doctor aboard that United Airlines flight thought he was set in his spot too.

Joeckel and Aboushi signed one-year deals. If they prove to be in the Sowell/Webb class, the Seahawks likely will be back near ground zero a year from now. Unless, of course, Schneider/Carroll scour the wasteland of college football for a lineman worthy of their first pick, 26th overall, in Thursday’s commencement of the NFL draft.

Football logic says — actually, it screams — to use the first pick on a cornerback, since the status of both starters, Richard Sherman and DeShawn Shead, is tenuous for different reasons. Particularly since the draft is said to be rich with premium cornerbacks and safeties.

But a case can be made that, after three injuries to Wilson last season because of pass-rush pressure, the franchise player needs to be armored up, whatever the cost.

The problem is that with each year in college, and for that matter in high schools, the “basketball on grass” offenses proliferate to the point where an O-lineman would sooner stick a hand in a hornet’s nest than put one on the ground in one of those icky, old-fashioned, three-point stances.

With practice time reduced by NCAA rules, the relative simplicity of the shotgun-based spread offense (“Y’all go out”), as well as the best big guys gravitating to the defensive side, chances of finding the next Walter Jones or Steve Hutchinson, the plug-and-play mainstays of Seattle’s first Super Bowl team, grow closer to nil.

“(College coaches) only have so much time with the players, and it’s getting shorter for them,” Schneider said. “They have to be able to go out there and be able to score 50, 60 points, right? That’s what you see when you go to these schools. You don’t see quite as much individual time anymore, it’s more just getting out there as a group.

“It’s not anybody’s fault, it just that the four- or five-star guys that are coming out of college would rather be known for sacking quarterbacks than protecting them. That’s just the way it looks right now. The hope is that the trend turns a little bit and we see more old school football, if you will.”

Since the return of old-school is unlikely to start before Thursday, the Seahawks will have to choose from a thin crop of O-linemen.

While never naming names of college players on the radar, Schneider did allow as to how the relatively few schools who still line up regularly in the I-formation with a quarterback under center have drawn his attention.

“You’re able to project the player (in a pro system) easier because you’re looking at exactly how they’re going to be playing in professional football,” he said. “You watch the Wisconsin guys, you watch Michigan State, Michigan — it’s easier to evaluate those guys, and it’s less projection.”

By that measure, there’s a fit for Seattle — Ryan Ramczyk. a 6-6, 310-pound junior tackle from Wisconsin, who’s been in the top three linemen on any credible mock draft, including this one from USA Today and this one from Pro Football Focus.

Naturally, it’s a guess as to whether he’ll be available by the 26th pick, especially because Schneider’s complaints about the deterioration of the college game are shared by exactly every one of his contemporaries in the NFL. Outside of Oakland and Dallas, it seems every NFL team laments about its line. So Ramczyk figures to be popular.

Because the power-run game has been so much a part of the Seahawks’ successful identity, getting it fixed might take a priority over the defense. To critics who say that going with an O-lineman in the first round two years in a row is a misapplication of resources, I would suggest telling that to Wilson while he’s getting stepped on by Ndamukong Suh.

In terms of urgency, the Seahawks’ need for a cornerback and a lineman with good futures is nearly a dead heat.  Because it’s really hard to get younger and better at the same time, it may explain why the Seahawks would be interested in trading CB Richard Sherman for a high first-round pick in this draft.