After a hard series of road matches, the Sounders need to pile up some points during a run of home matches, starting at 7 p.m. Saturday against New England. 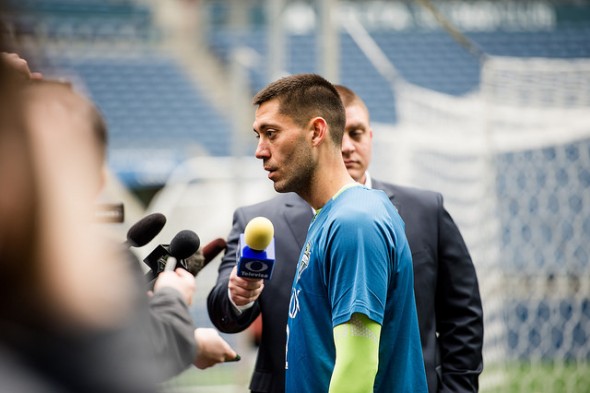 After playing five of their first seven games on the road and coming away with a 2-3-2 record, the Seattle Sounders are looking forward to spending some time at home. Clint Dempsey said Thursday that the early road tests helped the team find its identity, but the Sounders will need to make the most of the home field in four of their next six.

Dempsey couldn’t recall a time that a team he was on had so much travel through the first two months. The road matches force a team to figure out its identity earlier in the year.

“It’s an adjustment in terms of the travel, but it’s always difficult to go away from home and play,” Dempsey said. “You take it as a positive. It helps you build character, it helps you find out who you are as a team early on because you’re put in some tough situations. I thought we responded well. We’ve been unfortunate not to get more points.

“Throughout the season, you learn things. Houston, being down, fighting back and almost looking to get an equalizer there. Being two down against Montreal away, fighting back and getting a draw there. Any time you’re fighting to get back into games, I think that’s something that says a lot about your character. You look at those, as well as the 3-0 win away from home (in Los Angeles) and having a lot of possession, you take both of those as positives.”

The schedule is not easy. The six-game stretch includes a May 6 MLS Cup rematch against Toronto, a May 13 road trip to Chicago against a squad that has avoided its usual dismal start, and is capped by a May 27 Cascadia showdown against Portland for the first time this season.

Dempsey doesn’t expect top production from Seattle until later in the year:

“I don’t think any team is at their best at this point,” Dempsey said. “I wouldn’t hope that they would be. You want to be hitting your peak performance at the end.”

Hard to argue Dempsey’s point when the Sounders overcame a 6-12-2 loss to begin 2016 and rallied to win MLS Cup, although that was built largely through the midseason acquisition of Uruguayan midfielder Nicolas Lodeiro.

Seattle is unbeaten at home since Brian Schmetzer became the head coach in July. If that continues, the Sounders will look more like defending MLS champions as they approach midseason.