John Schneider waited until the 58th pick to help fix the Seahawks’ screaming need along the offensive line. Then the Seahawks moved on to honor the old NFC West rival, Jim Harbaugh. 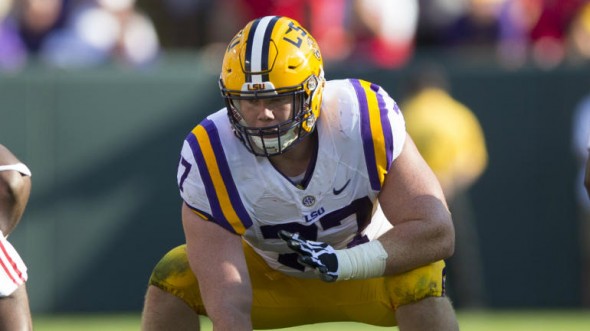 Ethan Pocic is two-and-a-half players in one, according to Seahawks GM John Schneider. / LSU athletics

John Schneider came up with a new metric for draft analysis: Ethan Pocic was a two-shirter.

So worried was the Seahawks general manager Friday afternoon that he wouldn’t get the 6-foot-6, 310-pound offensive lineman from Louisiana State with the draft’s 58th choice that he had to switch to a fresh shirt.

“He was the one guy that, quite frankly, we were really sweating out,” he said. ” We debated whether to go up and get him or just sit and wait and sweat it out. I changed my shirt.”

Patience (and backup laundry) prevailed. The Seahawks landed Pocic and explained the urgency: They saw him as 2½ players in one: Tackleguardcenter.

“We think he’s the most flexible guy in the draft,” said coach Pete Carroll, beginning what undoubtedly will be a slow process to convince skeptical Seahawks fans that he knows what he’s doing building an offensive line, the most under-performing unit in 2016 because it was also the youngest O-line in the NFL.

Pocic isn’t going to help the birthdate problem — “We’ll probably be the youngest line again,” Carroll said — but as guy who played four of the five positions in the Southeastern Conference well enough to be a third-team All-America pick, he can fill in for just about everyone on the line and avoid another embarrassment: Having owner Paul Allen call down to his Trail Blazers in Portland to find a power forward to play tackle.

That isn’t exactly what happened last season, but it was close: George Fant, a basketball player at Western Kentucky who never played football, was pulled in as an undrafted free agent trainee and, via a variety of failures, ended up starting at left tackle.

In the successful seven-year tenure of Schneider and Carroll, it may have been their most absurd personnel moment.

Fant played surprisingly well — for a baggy-pantsed rebounder. He’ll be back for another try this summer. But just in case, the Seahawks hired veteran free agents Luke Joeckel and Oday Aboushi to be the line’s gray eminences, and added Pocic as a guy who can one day be as good as another center who was a second-round draftee: Justin Britt.

“Honestly, as a center, I thought I was like Britt,” he said via teleconference. “He’s a taller guy, he’s a good athlete.”

It took three seasons for Britt to find his career niche, snapping the ball. He was a guard and tackle first. So . . . he seems to be the template for Pocic.

“I think one thing I do well is I’m versatile,” Pocic said. “That’s kind of my best skill. I’m just ready to get to work, whatever it is.”

Seahawks fans wanted Schneider to get to work earlier on fixing the line. But the Seahawks had chances Thursday at the 26th and 31st spots in the first round, and traded down. Then Friday they had a chance at 34, the second pick in the second round, but traded back a third time. At 35, they actually drafted a lineman, but it was the wrong side.

Malik McDowell of Michigan State, a 20-year-old man-child defensive end, might someday succeed Michael Bennett or Cliff Avril, but he will be no help in keeping QB Russell Wilson from predation and mayhem.

Help wouldn’t come for another 23 picks. At 58, Pocic, who was a center for most of his time in Baton Rouge, was the guy in a thin draft year for O-linemen to help save the Seahawks’ dignity, even if it cost Schneider a shirt ruined by sweat rings.

No team in the NFL over the past seven seasons has drafted more O-linemen than Seattle (15), probably with the least enduring success. Naturally, Schneider was defensive about his role in assembling an offense.

“I think we completely understand the importance of the position,” he said. “We’ve just made what we think are the appropriate decisions in managing our cap along the way, trying not to overspend at certain positions.

“It just so happens that we’ve had Pro Bowl, top -five guys on defense. We ended up trying to keep those guys.”

With Carroll, defense always comes first. But Friday, it also came third, when the next pick — the first of four in the third round at 90th overall — addressed the other screaming need: Cornerback.

The Legion of Boom apprentice is Shaquill Griffin of Central Florida, a 6-foot-1, 200-pounder who sounds like a fit in personality.

“The speed, you can’t deny it,” Carroll said. “He’s a terrific athlete.”

Then came the Jim Harbaugh commemorative portion of the program: A safety, Delano Hill, and a wide receiver, Amara Darboh, both from the University of Michigan, Harbaugh’s hideout ever since Carroll chased him from San Francisco and the NFC West.

Carroll could hardly have been more gracious in lauding the tutorial skill of his longtime rival.

“Coach Harbaugh does a great job,” he said. “It’s a good scheme fit to see those guys in pro style. He knows how to get the most out of people. Look what he did at that program, look how he turned it around. He did a fantastic job, which is no surprise.

“He’s done a great job everywhere he has been. The style of play really helps us, and we appreciate the opportunity to evaluate guys. We (don’t) have to project how it’s going to be.”

Carroll and Schneider didn’t take any Michigan linemen. Maybe that’s for Saturday final five picks in rounds four through seven. If it all works as they hope, and these Michigan men carry the Seahawks to the Super Bowl, perhaps they can send Harbaugh a token of appreciation.