The Seahawks started the final day of the NFL draft Saturday by selecting safety Tedric Thompson of Colorado. They have selected three defensive backs among their first seven picks. 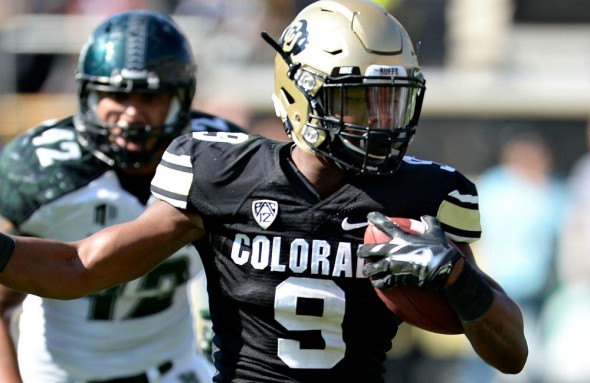 The Seahawks Saturday spent their first pick on the third day of the NFL draft, 111th overall in the fourth round, on the University of Colorado’s Tedric Thompson, a 6-0, 204-pound safety who made second-team All-Pac-12 last year after finishing with seven interceptions, tied for third in FBS. They followed two rounds later (187th overall) with another safety, Mike Tyson of Cincinnati.

After selecting Thompson and Tyson, the Seahawks came back at 210th overall in the sixth with Mississippi State tackle Justin Senior. They followed with East Central Oklahoma WR David Moore at 226th in the seventh round and Oklahoma State RB Chris Carson (249th), also in the seventh.

Over the three days, the Seahawks selected 11 players, six defensive, five offensive. Eleven is the most for Seattle since 2013 and required three trades down. But they moved down only nine spots, still took the player they claim they wanted, DT Malik McDowell, and picked up four fresh picks go with the seven they had Thursday.

Seattle selected three safeties, two defensive tackles, two wide receivers, a center, a cornerback, a tackle and a running back.

Thompson, the first pick Saturday, was part of an impressive Colorado secondary in 2016 that placed three of its members on the second-team All-Pac-12 team. He had 63 tackles, 3.5 for loss, and tied teammate Ahkello Witherspoon for the FBS lead with 23 passes defensed (seven interceptions, 16 passes broken up).

“This feels great,” Thompson said of going to Seattle. “I enjoy watching Earl Thomas and Kam Chancellor. Just knowing that I’m going to a team with those guys and learn from those guys, it’s just a blessing.

“The 12s are an extremely great fan base, so it’s a blessing. Pete Carroll was a great head coach when I was growing up in Los Angeles; to see him and the stuff he did at USC, it’s just a great feeling.”

Thompson interviewed with the Seahawks at the Indianapolis combine, but had no idea Seattle would select him.

“They didn’t give me any indication, and I didn’t ask anything,” he said. “I’m just trying to go ahead at wherever I’m needed or wherever they want to put me at.”

NFL.com: Quality athlete with desired long speed. High school wide receiver with good hands and outstanding ball skills. Can climb the ladder and challenge the jump ball. Works to stay in front of the route rather than trailing. Instincts and athleticism lead him to the throw. Successfully reads quarterback’s intentions . . . Average height for position and needs more muscle on his frame . . . Thompson in an instinctive cover safety with strong ball skills and a history of production at Colorado.

Pro Football Focus: In 2016 Thompson gave up completions on just 40.3 percent of passes into his area while racking up seven interceptions and seven passes defensed . . . Highest tackling efficiency in passing game for all draft eligible safeties . . . Skinny stature, unsure how he would hold up against TEs in man coverage . . . There’s a well-roundedness to his game that suggests he could develop into a starter.

Tyson, a native of Norfolk, VA., Kam Chancellor’s hometown, has always had to live with boxing jokes, but is no relation to the former heavyweight champ (his grandfather, father and son are all named Mike Tyson, with different middle names). He played as a freshman but didn’t become a full-time starter until September. He led the team with five interceptions while making 46 tackles, 4.5 for losses, and breaking up five throws. He played in 43 career games.

“I busted out in tears, to be honest with you,” Tyson said after getting the call from GM John Schneider. “My heart dropped, my stomach was touching the ground. I was really lost for words. It was like a dream come true, especially since you have Kam Chancellor coming from this area playing for the Seahawks.

“That was the only visit I took during the off-season. That was just great, knowing that they had seen something in me to give me that call today.”

NFL.com: Wrap-up tackler who lands chest first and drags ball carriers down quickly. Good finishing rate as a tackler and doesn’t let many slip away. Attacks downhill once he diagnoses run . . . Tends to get lost when back is to the quarterback. Slow to get head around and find the football, allowing receivers to make necessary adjustments. All five of his interceptions came in two games . . . Has average safety skills and could benefit with more weight work.

Pro Football Focus: Did not profile this player.

Senior started all 13 games at right tackle for the Bulldogs after playing both left and right tackle in 2015. He played in 49 career games, starting 39. A native of Montreal, Senior was the No. 1-ranked prospect on the Canadian Football League’s official scouting list in December.

“Seattle is a running team, and I love running the ball. I think it is the best part about football, and they are a run-first, throw-second type of team. I’m just trying to bring that mentality back to Seattle, just pound and pound and pound all the way up the field.  I love that.”

NFL.com: Senior has been a staple for the Bulldogs over the past three seasons, starting nearly every game at the right tackle spot . . . Has long arms and strong hands, but his lack of bend and inconsistent footwork could cripple his NFL cause if he doesn’t improve them. Senior has three years of experience against talented, SEC defensive ends, but he struggled badly at times in the Senior Bowl.

Pro Football Focus: Athletic and has the movement skills required of the tackle position . . . Great frame and long arms that he understands how to utilize . . . More potential than production up to this point . . . Will need to be taught NFL style pass-blocking techniques and schemes.

A big receiver (6-1, 219) with speed (he has run a 4.43 40-yard dash), Moore caught 57 passes last season withd 878 receiving yards with 10 touchdowns. He averaged 15.4 yards per catch and is a two-time first-team all Great American Conference selection. His best game was 170 yards and three TDs against Oklahoma Baptist. None of the major scouting agency profiled Moore, so the Seahawks took a flyer here.

“I didn’t expected to get drafted, not at all,” said Moore. “When it got to seventh round, I thought I’m just looking for free agency. There was nothing wrong with that, I was just trying to get to a camp, honestly.”

Carson went the junior college route after a high school career in Georgia, signing with Butler Community College in Kansas and racking up more than 1,600 yards and 17 scores in two years there. Carson’s senior year started off slowly (12-45, TD in first two games) and missed four games with a thumb injury. He came on near the end, finishing with 559 yards and nine touchdowns on 82 carries, earning honorable mention All-Big 12.

“I wanted to get my name called,” Carson said. “I had talked to a lot of teams about being signed as a free agent. Then Seattle called me, and I just got excited to see that number pop up. I’m a physical runner. I like to break tackles, get hard yards. I just like to make people miss and I’m not afraid of contact.”

NFL.com: Built like an NFL running back . . . Chiseled from granite with a broad chest and thickly muscled shoulders . . . Reinvented himself from finesse to power after ribbing in the running backs meeting room . . . Lead shoulder carries pop in it . . . Runs too upright . . . Missing the flexibility to sink and cut sharply . . . Long strider who will struggle to gather his feet quickly enough for sudden change of direction.

Pro Football Focus: Did not profile this player.

This is the first year that Washington has had as many as five taken since 2001 when QB Marcus Tuiasosopo, OT Eliot Silvers, LB Jeremiah Pharms, S Hakim Akbar and OG Chad Ward went between the second and sixth rounds.

The grades in the far right column in the chart above are NFL.com’s projection of a player’s potential career arc. What the grade ranges mean: