Despite a slow start, the Seattle Sounders scored three goals in the final fifteen minutes Saturday to overcome a 3-0 deficit and earn a draw for the first time in club history. 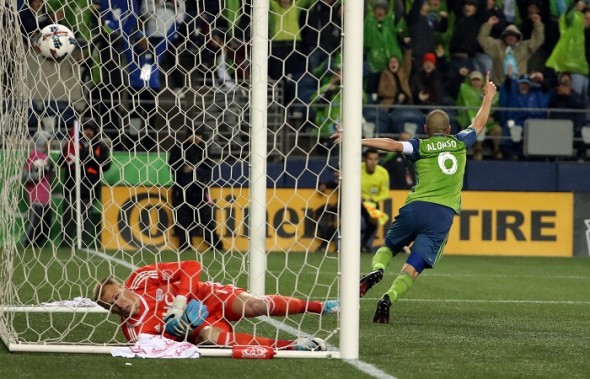 After three defensive blunders put the Seattle Sounders deep in the hole Saturday night, an astonishing rally of three goals in 15 minutes created a 3-3 draw against the New England Revolution at CenturyLink Field. The match marked the first time in Sounders history, stretching back to its NASL days in the 1970s, that the club earned points after trailing by three.

Even though the rally was thrilling, Sounders coach Brian Schmetzer was not content.

“I’m certainly disappointed that we took three at home,” Schmetzer said. “The effort they put into the game, they deserved to get three points, you would look at (the stats) and say, ‘Yes, that team deserved three points.’ We know that life isn’t always fair. That’s part of what makes our sport so great.”

The numbers had a slope like a sumo wrestler solo on a see-saw. Seattle (2-2-4, 10 points) controlled the ball for 74.4 percent of the match, outshooting the Revolution 26-8. New England (2-3-4, 10 points) dropped back into an eight-man bunker early and stayed there all game, needing to make 45 clearances against Seattle’s onslaught.

Even with the dominance, the Sounders trailed by three 54 minutes in. The third Revolution goal, a counter-attack that caught right back Jordy Delem out of position and led to an easy tap-in for Juan Agudelo, seemed to suck the air of the reported crowd of 43,230.

Schmetzer immediately removed Delem in favor of rookie Henry Wingo, saying Wingo’s speed would open up the game on the right side. Two more subs saw Jordan Morris replaced by Harry Shipp, and center back Roman Torres inserted up top to try and bully his way to a goal.

The Sounders kept closing in, but were unable to finish. Three times, shots hit the woodwork and redirected as though the goals were cursed.

Then, a ball went in.

Seattle pulled one back in the 75th minute, thanks to Nicolas Lodeiro, then added another off the head of Will Bruin in the 86th, with left back Joevin Jones assisting both.

The final push came in the 88th minute. Lodeiro swung in a cross that skipped off the top of center back Gustav Svensson’s head, before Osvaldo Alonso converted at the back post with a diving header.

Goal. History. A point at home.

Still not good enough for Schmetzer.

“At home, we’ve got to do a better job to not go down by three goals,” he said. “That’s the sting, that’s the hurt, that’s the feeling of frustration. The only comment I would make is that the fight and the determination of that group of players is the mentality of champions.

“That’s the only positive.”

Delem’s was not the only defensive blunder. In ther 16th minute, GK Stefan Frei had a routine save skip past his body into the net on a 35-yard shot, while Svensson failed to maintain proper positioning against Agudelo when the striker headed in a cross 10 minutes later.

Frei, the worst of the three offenders, owned the blunder both postgame and, more colorfully, at half time:

Schmetzer was irked, but whether the players say so publicly, they took great pride in a stunning rally that made history.

By the end of the season, the single point may not account for much. But for 15 minutes, the Sounders put on a show that will last a good long while in the memory of its witnesses.