Among the notable attendees at Wednesday’s announcement about the winner of the KeyArena fixer-upper derby was Francesco Aquilini. Since 2004, he and his family have owned Rogers Arena and the NHL Vancouver Canucks, a franchise that has pined almost since inception in 1970 for an NHL team in Seattle, a loathsome rival from which money could be mined.

For proof, observe the roiling happenings this weekend when Canada’s baseball team comes to Safeco Field for three games against the Mariners. There’s nothing like neighborly contempt to sell tickets and beer.

I asked Aquilini how he came to show up for the announcement that Oak View Group had earned Mayor Ed Murray’s blessing to rebuild the barn after Anschutz Entertainment Group bailed out, leaving a trail of invective about mistreatment.

Aquilini said he was having lunch last week in Los Angeles with a longtime friend, Irving Azoff, the music-industry baron who is partners in Oak View Group with CEO Tim Leiweke. Azoff also was at Seattle Center Wednesday, and took a turn at the mic to say nice words about the mayor, the city and the opportunity to drop $600 million-plus on a building his company won’t own, on ground he can’t have.

“It was just a random thing,” Aquilini, a Vancouver native, said. “He invited me to come down, saying we’d love to have you to support the plan and the city.”

The invitation came before any public announcement of the bid winner, before AEG’s nasty breakup letter, before the neighborhood Uptown Alliance wrote a four-page letter to Murray saying it couldn’t endorse either bid proposal, before Murray claimed to have made up his mind Friday.

While rumors for weeks had Oak View the leader, if for no other reason than AEG’s foolish idea at the outset to seek public bonds, Azoff and Leiweke were cool with handing out invites to the party ahead of time.

The episode on its own was not a big deal, merely another sign that this cake was well-baked awhile ago. As I watched the warm embrace of Murray, city staffers and Center workers by the OVG people and their friends/clients/partners, something felt odd. Three words came to mind that defined the feeling:

Hey, I get why everyone connected with the the Center and city government was excited by a big shiny. Solving for the future of the arena and the Center with private money would be a dream come true. And Leiweke is a charmer, an evangelist and a salesman who knows well the soft spots of the townfolk in River City.

In his previous job, in charge of Maple Leaf Sports and Entertainment in Toronto, he left an impression on a writer at the Globe and Mail:

Leiweke is well aware that he is incapable of treading lightly. Every idea is the greatest idea ever, and must be shouted at top volume to anyone who will listen. When he is up, Leiweke is an elemental, irresistible force. He has many enthusiasms, and they tend to run into each other.

He is exactly the kind of personality that longtime observers of the unique problem of a sports arena at Seattle Center should recognize as potentially risky.

I’ve written about this unique circumstance before, but somehow it doesn’t seem to stick. With potential quicksand looming, I’ll try again.

From its birth as a pro sports arena in 1967 to the Sonics’ departure in 2008, the arena was the only long-term venue in the NBA and NHL located in what amounts to a public park. So by definition it has considerations beyond private buildings, whose purpose is to serve the owners’ bottom line. 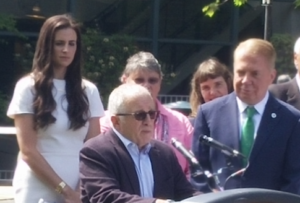 Some might consider the distinction uniquely Seattle, and it does allow for a few uses beyond pure profit. The problem happens when it comes time to change or upgrade the building to keep it contemporary.

As with any park, Seattle Center, which draws more than 10 million visitors annually, has hundreds of constituencies, each believing it should have a voice in changes that may affect usage. Woe to the politician who ignores those voices. So the politician typically seeks to please most of the people most of the time with the smallest drain on public resources.

The path of least resistance is a big reason why we no longer have the Sonics, and are going through agonizing civic backflips to get back the NBA. The NBA knows all about this, and is loath to come back to Seattle’s public park.

The institutional weakness of municipal governments in owning/managing entertainment venues has no more damning example than here in Seattle.

In order to keep then-Sonics owner Barry Ackerley in the early 1990s from leaving the Coliseum, the city agreed to a modest $100 million renovation, using 20-year construction bonds to be paid off largely from revenues from luxury suites. Mortgage payments began when the Coliseum became KeyArena in 1995, scheduled through 2015.

Obliged to please a tough owner as well as park users, the city agreed to sign a 15-year lease with Ackerley’s club instead of matching the 20-year length of the bonds.  The result of this profound foolishness was that when out-of-towners in 2006 bought the club, they knew the worst that could happen was a four-year wait until lease expiration in 2010, when they could move free to Oklahoma City.

In an attempt to leave early in 2008, the owners sued with a phony breach-of-lease argument. Yet the prospect of losing and paying off bond debt until 2015 without an anchor tenant’s revenues caused Mayor Greg Nickels and the council to soil themselves.

Even though the city likely had a winning hand, Nickels folded and took a $45 million settlement that let Kevin Durant go to the Dust Bowl and let Sonics fans go to hell.

In any negotiation between a municipal government and hard-headed private business people, my money is on the guys with the shiny shoes and $5,000 suits. Which brings us back to Leiweke.

OVG has committed $564 million to a project that not only is years from breaking ground, it hasn’t begun to address a laundry list of issues the city and Uptown Alliance has discovered in the winning bid.

Since Leiweke is using $277 million of his company’s money and a promised $196 million borrowed from Goldman Sachs, he likely will be on a tight margin that could crumble under the weight of demands by park users and panicky residents of overgrown neighborhoods.

The city council, which now is in charge of negotiating the details of a potential agreement, must listen to every Center constituency, and those in the neighborhood. But the council can’t push Leiweke beyond whatever he believes to be a breaking point. As he said Wednesday, “We have a high and a low.”

This negotiation figures to be a gravel sandwich.

What the council needs to do, in the vernacular of Washington, D.C., is hire a special counsel. The city needs an outside agency to vet OVG’s proposal and, if necessary, engage in the negotiations. The chumminess visible Wednesday did not suggest a clear-eyed impartiality would be part of the road ahead, which is full of temptations from a big shiny.

Seattle already saw in KeyArena’s first remodel in 1995 how over-eager managers of a public park caved to a team owner, which ended up helping lose a pro sports franchise. In the past week, another Key remodel was stained when the losing bidder accused the city of bias, neglect and a lack of transparency.

Perhaps the reaction was sour grapes. But leaving a potential contractor sufficiently pissed off to issue a public tirade does not suggest a well-managed project. This was, after all, AEG, the world’s largest entertainment management company, which the city hired to operate KeyArena since the Sonics’ 2008 departure.

Rarely is it good management for the owner of a shop to anger the one in charge of running it.

Just because Leiweke hates his former company, AEG, doesn’t mean the city needs to share the animus. Nor should the city be charmed into believing that Leiweke will have the interests of a public park in mind when he needs to cut financial corners.

City government and Center staff are too emotionally invested in one outcome, and Leiweke knows it. Seattle needs an independent agency to get it right the first time. As one of Azoff’s bands, the Eagles, might have put it, you can check out, but you can never leave a bad deal.