With several key absences from the starting lineup, the makeshift Sounders couldn’t keep up with a weak Union team in Philadelphia Saturday morning. 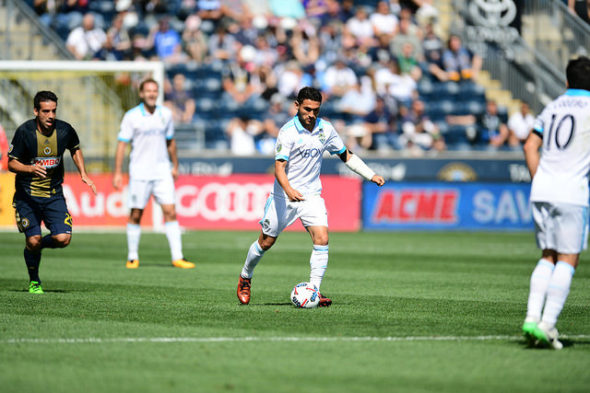 So dire were the circumstances of the Seattle Sounders’ lineup in Chester, PA., Sunday afternoon that Cristian Roldan, with a broken arm, was pressed into service as an attacking midfielder. Forced to make four changes to a roster that Wednesday bullied the Vancouver Whitecaps, the Sounders lost 2-0 to a Philadelphia Union team dwelling in the Eastern Conference basement.

Wednesday’s home victory proved costly for Seattle (12-9-11, 47 points). Osvaldo Alonso  had a hamstring strain, while Roman Torres sustained an undisclosed leg injury in the late minutes. Victor Rodriguez was unavailable Sunday after flying home to Barcelona ahead of the birth of his child.

The shuffling put Tony Alfaro at center back, Jordy Delem in a defensive midfield role next to Gustav Svensson and Nohou Tolo was at left back to free Joevin Jones to play further upfield.

“(I’m) not happy,” said coach Brian Schmetzer. “You have to start with yourself. I think how we set up the team, our overall tactics, going against a Union that was certainly desperate to try to cling any kind of playoff hope. That’ll be the thing I do first.

“In the second half we had a much better performance. Between the 60th to the 70th minutes, I thought we created four, five really good looks on goal, and we weren’t able to score. But the first half we dug a hole. I have to look at myself and see if I can make sure that doesn’t happen.”

Philadelphia (10-13-9, 39 points) took the lead in the 28th minute, when Marcus Epps beat Stefan Frei to the near post after taking a cross out of the air.

The death knell came in the 88th minute, when Roland Alberg punched in a second goal for the hosts from a low angle, deflecting off Frei’s hand to the far side of the net.

Clint Dempsey subbed on in the second half, and generated several promising shots on goal, but was unable to score past Philadelphia keeper Andre Blake.

The Sounders’ 47 points leaves them tied with Portland and Kansas City for second in the MLS West, led by Vancouver with 51.

The Sounders have a break for the FIFA international World Cup qualifier window, and will close out the regular season with two home games against FC Dallas Oct. 15 and the Colorado Rapids on Oct. 22, respectively.