Two goals in three minutes by Will Bruin propelled the Sounders into the playoffs Sunday. Seattle can guarantee a first-round bye with a win in the regular-season finale. 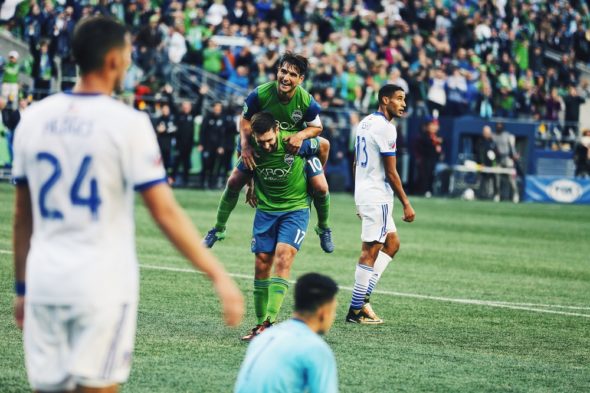 Two goals in three minutes from forward Will Bruin clinched a ninth consecutive playoff berth for the Seattle Sounders Sunday at the Clink. The 4-0 win over FC Dallas was the second victory in the last eight matches, moving Seattle into third place in the Western Conference standings. The Sounders can finish the regular season no higher than second nor lower than fourth.

Bruin’s scores were his first since Aug. 5.

“The backstory there is that I’ve been harping on him a little bit too much on his defending — he’s the first guy in our defense,” coach Brian Schmetzer said, smiling. “I just let Will be Will. Tonight, before we went out on the field, Will had brought up, ‘What do you want me to do out on the field defensively?’ I said ‘Will, I don’t want to talk about your defending, just score some goals.’

“It’s a nice banter back and forth between us. Will has been an opportunistic goal-scorer throughout his career. He’s an animal inside the box. He likes to pick up loose pieces. He’s good in the air and he does a lot of defending for us in the attack.”

The goals brought his season total to 10, the fourth time in his career that he struck twice.

Victor Rodriguez started the scoring in the 31st minute, when Clint Dempsey slipped a through ball through the right side of the back line to find the Spaniard at the 18-yard line. Rodriguez went one-on-one with Dallas keeper Jesse Gonzalez and finished the ball past him.

Bruin struck just past the hour mark. In the 64th minute, Dempsey rocketed a shot off Gonzalez, and Bruin powered the rebound into the unprotected net, dragging defender Atiba Harris five yards in the process.

Three minutes later, Rodriguez ran onto a loose ball inside the area but had it poked away. As the ball rolled away from goal, Bruin smashed it into the net to all but guarantee the victory and start an early celebration for the 48,478 in attendance.

Bruin offered his side of his interaction with Schmetzer.

“A few games ago I gave him a little attitude about always talking about defending when I’m a striker. I know haven’t scored in a while,” he said, chuckling. “It was a little inside joke between us. I worried about scoring, and I was fortunate to get a little bounce to start it.”

Bruin was pleased to reach the 10-goal mark:

“It’s been a while, so it feels good to get back on the score sheet. It’s always my initial goal at the beginning of the year to get double digits (in goals) and then go from there. It took me 33 games this year, but I’m there.”

The final score came when Lamar Neagle smashed in a header on a cross from Nicolas Lodeiro from the right alley with the final touch of the game. It capped off Seattle’s third four-goal performance of the season. The shutout was Stefan Frei’s league-leading 12th, a franchise record.

“In there, Stef was making sure that he thanked all of his teammates,” he said. “You’re not going to get a lot from him talking about himself. I think he’s the goalkeeper of the year. He has come up consistently in big games. All goalkeepers across the league make saves. Stef makes the key saves that you need him to. That’s what I think pushes him ahead, in my opinion.”

The other two Cascadia clubs play each other on the final day of the regular season Oct. 22. It is impossible for Seattle to win the west, due to Vancouver’s lead in the first tiebreaker, most wins. A Seattle win in its finale Sunday at home against 10th-place Colorado, regardless of the Portland-Vancouver match, would secure second place and one of the four first-round byes in the playoffs.

Bruin summarized the night in the context of the playoff picture.

We clinched a playoff spot and we control our destiny going into the final week,” he said. “That’s what you want.”