The Seahawks swapped out left guards almost every series against the Giants, and swapped running backs every play on the first series. And they got away with it. 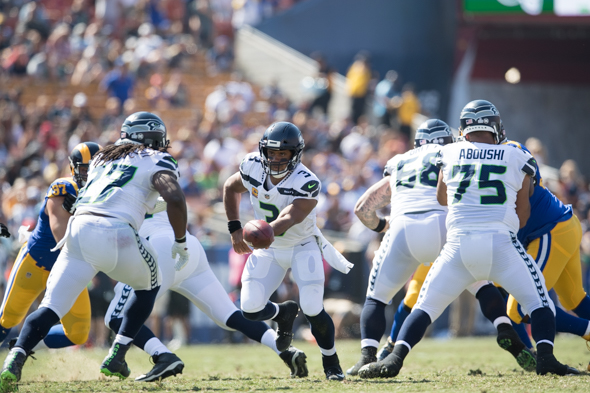 The Seahawks run game is 18th in the NFL at 108.3 yards per game. / Drew McKenzie, Sportspress Northwest file

Against a reasonably good, aggressive Giants defense, the Seahawks offense Sunday got away with a couple of under-appreciated maneuvers that bode well for the immediate future.

Throughout the game, they alternated one line position and the running back position, and still managed 425 yards of offense, including 39 pass attempts and only one sack, to win going away, 24-7

Rotating veteran Mark Glowinski and rookie Ethan Pocic (in his first career start) at left guard, in place of injured Luke Joeckel, should have been like leaving the door open for an avalanche. Pocic even had to sub in for C Justin Britt, who left the game briefly after twisting his ankle before returning.

Instead, the Seahawks moved the ball steadily throughout the game, although the red zone debacle in first half — 10 plays inside the 10 yard line, and no points — will preclude unloading more than one or two pieces of confetti.

“Generally (rotating offensive linemen in game) is not acceptable, but if you force your way into it, you can do it,” coach Pete Carroll said at his Monday presser. “There’s sometimes a sacred chemistry in there you don’t want to disrupt. But we’ve been through so much over the years, I don’t know why we would fall into that category.

“It worked out just fine.”

When it comes to the Seahawks and their offensive line, the sacred almost always gives way to the profane. The 104 rushing yards in 31 carries Sunday gave the Seahawks a 108.3 yards per game average, a mediocre 18th in the NFL. It’s nothing like the days of Marshawn Lynch, but given that a third starter, LT Rees Odhiambo, is also in his first year, the peril of losing to a 1-5 team was front and center through three quarters.

Procic and Glowinski, who will be in competition again this week ahead of Sunday’s home game against the Houston Texans, received a thumbs-up from Carroll.

“Both did OK,” he said. “I was real fired up for Ethan in that he played two spots. He did well jumping into center, playing well and jumping back. Glo played like he played and hung in there and did fine.”

Based on Carroll’s choice of words, it sounds as if the rookie second-round draft choice from Louisiana State may get the edge for Sunday.

“Ethan’s a very special player for us,” he said. “For a rook to come in and play across the board for us and hang in there and make calls and play solid football, that’s a lot to ask. We’re not slowing down on him — we’ll continue to hold him responsible for all of it.

“It’s why we were so excited about drafting him. We were hoping he’d be that guy.”

At running back, the first scrimmage play featured Thomas Rawls, the second Eddie Lacy, the third C.J. Prosise and the fourth J.D. McKissic. It hardly unusual to rotate backs, but all of them in a row in the same series? Carroll was a little vague on the explanation.

“I’m not sure I know how to answer that; what was I hoping to accomplish?” he said, repeating the question. “We wanted to see four guys right off the bat. (The Giants) don’t know who’s coming in and what we’re doing. We’re just trying to keep them off balance a little bit. There’s some thoughts in there that I really don’t want to share with you, but also it’s not that big of a deal, really.”

Whatever the secret was, none of the backs distinguished themselves in the series or the game. In fact, Prosise tweaked his sore ankle during pass protection on his only play and never returned to the game. Rawls had 11 carries for 36 yards, Lacy 11 for 34 and McKissic three for 15. Rawls also had the Seahawks’ only turnover, a fumble, and dropped a pass.

But Carroll was not despairing of the running game’s overall state.

“We’re still developing. I still feel like we’re finding it. I’m comfortable about it, I have no problem with it.”

It’s easy to forget, because he was a rookie, but Chris Carson was the opening game starter. Despite missing the past two games after breaking his ankle Oct. 1 against Indianapolis, Carson remains the team’s leading rusher with 208 yards. QB Russell Wilson is second with 164. Six games into the season, Lacy broke the 100-yard barrier Sunday and has 108.

Lynch used to get that much fetching Skittles from the barrel in the garage. Then again, Lynch had to take BART home from the game with his new team, the Raiders, after his ejection Thursday in Oakland for grabbing a referee.  He has 266 yards on 72 carries, just a 3.7 ypg average.

Football life is hard everywhere. Profane over the sacred, every time.