After finishing 1-1-1 against their Cascadia foes in the regular season, the Sounders face the Whitecaps in a two-legged series starting Sunday in Vancouver. 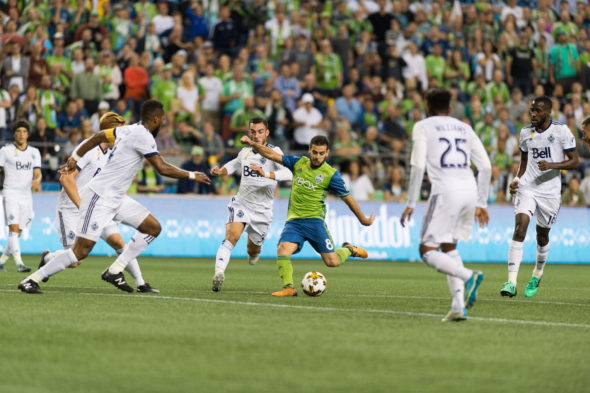 The Seattle Sounders were spared a long trip for the Western Conference semifinals, thanks to a 5-0 thrashing of the San Jose Earthquakes by the Vancouver Whitecaps Wednesday night in the knockout round. The Sounders will play at BC Place Sunday (5:30 p.m., ESPN) before returning home for the second leg in Seattle Nov. 2.

The series marks the first time in MLS history that Seattle and Vancouver have met in the postseason. Vancouver, which slipped to the No. 3 seed on the final day of the regular season due to a 2-1 loss to fellow Cascadia rival Portland, recovered on the back of former Sounder Fredy Montero’s first MLS playoff goal.

Cristian Techera and Kendall Waston added goals in the second half, before Nicolas Mezquida punched in the final two goals to complete the dismantling of San Jose, which entered the postseason with a minus-21 goal difference.

Montero, who scored all Vancouver goals against the Sounders this season, is Seattle’s all-time leading scorer, but never scored for Seattle in 10 playoff appearances.