With both teams dealing with injuries and fatigue, the first leg of the Western Conference semifinals Sunday featured no goals, unusual rosters, and plenty of fouls. 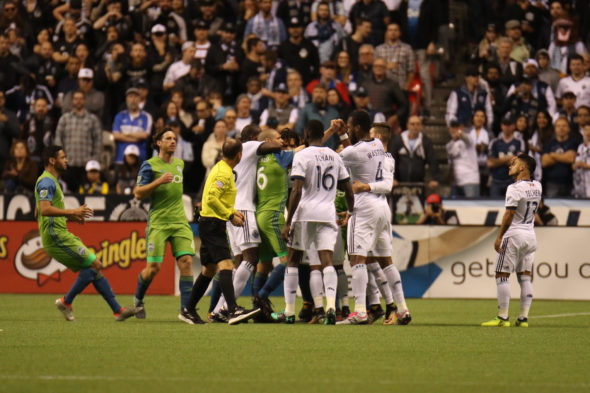 VANCOUVER, B.C. – Fulfilling the stereotype of MLS playoff form, the first leg of the MLS Western Conference semifinals features atypical casts and a lack of resolution. The Seattle Sounders and Vancouver Whitecaps settled for a scoreless draw in the opening act of the two-part series.

The Sounders’ understudies were all called in at once.

Seattle was absent Clint Dempsey due to a red card suspension. Midfielder Victor Rodriguez missed due to injury. Defensive midfielders Gustav Svensson and Osvaldo Alonso both began on the bench.

Sounders coach Brian Schmetzer fielded a lineup that had Jordy Delem make his 10th start of the season and Harry Shipp make his 12th. Svensson and Alonso eventually made their way in to the match, but the disruptions kept Seattle from establishing its usual dominance of possession.

Vancouver coach Carl Robinson was similarly forced to exclude several marquee players from the starting lineup because his team was playing its third match in seven days. Cristian Techera, Yordy Reyna and Nicolas Mezquida all observed the majority of the game from the bench.

Still, Schmetzer felt his side, which finished with a single shot on goal, could have created a better result.

“I actually wish we would have pressed the issue a little bit more,” Schmetzer said. “I think there were opportunities in the second half, and even the one opportunity in the first half, where we were able to get behind their defense and create some problems for them.

“Vancouver is too good a team for us to just sit in and defend. We have to score some goals. The balance was there, but I wish we could have pushed for the first goal.”

Seattle’s best chance of the night arguably came from a near own-goal, when a cross in from Joevin Jones in the 35th minute deflected off the crossbar after colliding with Vancouver center back Kendall Waston.

Defensively, the Sounders were steadfast, limiting Fredy Montero, who scored three goals against his former club during the regular season, to three shots.

Svensson and Alonso appeared as substitutes in the final half-hour of play, hinting that the pair had recovered from lingering leg-muscle strains.

The match had just one major flare-up between the Cascadian rivals. In the 83rd minute, after Seattle left back Nohou Tolo went down with an apparent leg cramp for the second time in a short span, a scrum developed away from the injured player. Despite shoving and grabbing, no cards were handed out by referee Kevin Stott.

Cristian Roldan, at the epicenter of the shoving match, chalked up the boil-over to the tension of the series.

“Playoffs, Cascadia,” Roldan said. “Two teams that want to win, that are very competitive. We have guys that are going to do anything for the team. If that’s getting a tackle or getting mad at another player, it’s bound to happen. We just can’t do anything silly when we get into those little fights. We can’t put hands to the face or do anything like that. That will change a series.”

The draw means that there is everything to play for in the second leg at CenturyLink Field Thursday (7:30 p.m., FS1). A win guarantees Seattle a berth to the conference finals. A scoreless draw in that contest would lead to extra time and potentially penalty kicks, while a draw that features any number of goals would allow Vancouver to advance thanks to the away-goals tiebreaker.

With three days to prepare, Schmetzer emphasized the home-field advantage and a chance to field his best players.

“Carl’s going to get his guys ready,” he said. “We obviously will benefit from some guys being back in the fold. It should be a tough match. We’ll be in front of our home crowd, so hopefully we can carry that advantage through.”