Thiel: The two-peat may be real for Sounders

The brilliance of Clint Dempsey at 34 may give the Sounders what they need to prevail in the arduous task of repeat championships. 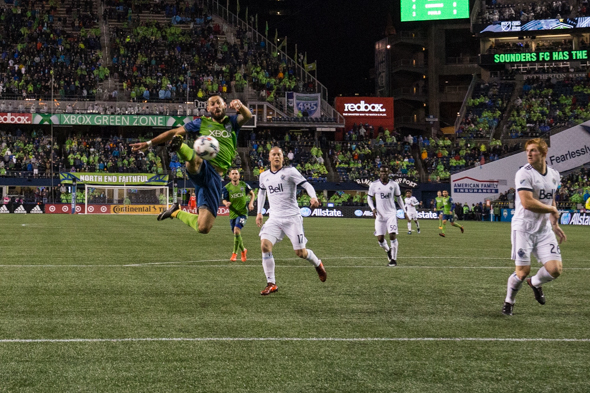 Clint Dempsey had a himself a night Thursday. / Drew McKenzie, Sportspress Northwest

It may have seemed normal. Clint Dempsey certainly wanted it to seem normal, saying, “I don’t look at it like I missed out.” But when the Sounders’ superstar bagged both scores in the 2-0 triumph over Vancouver Thursday night at the Clink that put the Sounders in the Western Conference finals, it was a large matter beyond the victory.

A deuce from the The Deuce signaled that, at 34 and following a startling bout with heart arrhythmia that cost him participation in the run to the 2016 MLS championship, he was back in a way that made him look 24.

Even this season, his return to the playoffs was delayed a game because he sat out Sunday’s first of the two-leg series with the Whitecaps with a red-card suspension. But he denied the presence of additional incentives.

“I’m just excited I’m playing now,” he said, “making the most of the time I have left.”

The time will include a couple of matches against the winner of the other conference semifinal between Portland and Houston, who meet Sunday to decide Seattle’s foe starting Nov. 21. Given the health problems inflicted upon the Sounders roster, Dempsey’s renaissance couldn’t be more timely.

Injuries kept three Sounders stalwarts — Brad Evans, Ozzie Alonso and Jordan Morris — out of the game, and limited the availability of starters Gustav Svensson and Victor Rodriguez. Seattle was up against an opponent that played them dead-even in 2017 — 1-1-1 in the regular season and 0-0 in the series’ first game Sunday at BC Place.

Basically, in a do-or-die match against a quality opponent, the season rested largely on Dempsey.

That is the cliche, come to life in front of 39,587 who tensed up through a third scoreless half in this series. But in the 56th minute, Dempsey broke through to ease the tension, then commenced the celebration in the 88th minute with a clincher that dispatched the final chance for the Whitecaps to prevail on an away-goal tiebreaker.

“Dempsey,” said Schmetzer, “has been ready for a month.”

Remarkably enough, the Sounders have been ready too, despite all the injuries. They are embarked on the toughest task in team sports — defending a championship. The win Thursday meant the Sounders have lost only twice in their past 19 contests. It has been nearly five months since they have lost a home game.

Which doesn’t mean the chase for the two-peat has been anything less than arduous.

“It has been a challenging season, to say the least,” Schmetzer said. “We started this season with a little bit of a hangover. Some guys maybe were still celebrating the championship. As a head coach, I needed to learn some things too: Were the things we’d been doing the right things? And (do we) try new things that push to a higher level? This season was a learning process for the players and myself.”

Whatever they’ve learned seems to be paying off. The Sounders, who have not lost a home playoff match since 2013, allowed the No. 3-seeded Whitecaps only one shot on goal in the two playoff games, and the Canadians haven’t scored on the Sounders in the past three meetings.  Despite needing strong play from youngsters given bigger roles because of injuries, Seattle seems to be the team to beat in the West.

“At the tail-end of this season, you see some of the good work,” Schmetzer said. “We have figured out how to win games again. It’s a pretty impressive record. We’re hard to beat.

“In these two-game series, it makes us dangerous. If we get past Houston or Portland, we got as good a shot as anybody to repeat as champions.”

That has happened in MLS just twice in the past 11 seasons. With Dempsey, who led the Sounders in scoring with 12 goals, still playing nearly as well as he always has, the chance grows for another.