From a statistical point of view, Washington’s 2017 defense compares favorably with the 1991 defense, considered the best in school history. 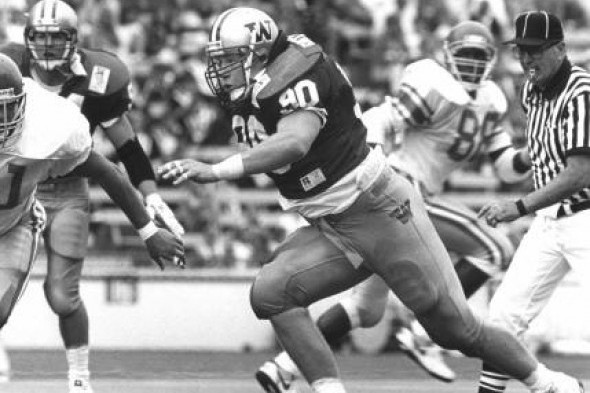 For more than a quarter of a century, the 1991 Washington Huskies have served as the standard against which all prior and subsequent UW football teams have been measured. That’s not likely to change until some future club produces a perfect season or wins a national championship, as did Steve Emtman’s team 26 years ago.

The 2016 team made a run, reaching the national semifinals before bowing to a superior Alabama in the Peach Bowl in Atlanta. The 2017 team still has a shot at returning to the playoffs if it wins out, but the 13-7 stumble at Arizona State Oct. 14 likely dooms the Huskies, No. 9 in the latest CFP rankings, even if they become conference champions.

The 1991 team has become such a storied bunch – it entered the Husky Hall of Fame en masse in 2011 – that comparing other editions to it somehow seems inappropriate. But statistically, the 1991 and 2017 teams — especially the defenses — compare favorably even though the college game today is much different than the one in which Emtman dominated.

One major difference since 1991, and especially in the past decade, is the emergence of spread offenses, allowing more teams to score quickly and more often.

The number of teams averaging at least 400 yards of total offense has more than doubled since 1991.

From all of that, two notions follow: First, the defensive numbers Washington posted in 1991 probably wouldn’t be quite as gaudy today given the profusion of amped-up offenses. Second, this year’s defense, No. 1 in the nation in total defense (240.9 yards per game to No. 2 Alabama’s 243.8) and No. 2 in scoring defense (11.1 to No. 1 Alabama’s 9.8), probably would have even better numbers than it does if matched against 1991 offenses.

Since it’s impossible to prove any of that, the following comparison between the 1991 and 2017 defenses is purely for curiosity.

The major differences between 1991 and 2017: Largely because of Emtman, the Outland and Lombardi award winner, the 1991 Huskies were more adept at getting to the quarterback (48 sacks to 29), and also better at forcing turnovers. However, this year’s Huskies still have three regular-season contests and a bowl game to pad those numbers. Some additional points:

In the Nebraska game, Washington trailed 14-6 at halftime, but outscored the Cornhuskers 30-7 in the second half.

In the Michigan game, the point differential was narrowed when Tyrone Wheatley of the Wolverines scored a late TD while UW’s defensive starters were out of the game. And with a minute left, Washington reached the Michigan five-yard line, but opted to run out the clock with the third-string quarterback running the offense.

The 2017 Huskies played a cupcake non-conference slate, have yet to record a win over a ranked opponent, and probably won’t get a chance to do so until the Apple Cup Nov. 25.

The 1991 Huskies faced six opponents that finished with winning records. This year’s Huskies will also face six provided Utah, currently 5-4, finishes above .500. That’s not likely since the Utes still have to play No. 9 Washington and No. 19 Washington State.

The 1991 Huskies had only one game in which the opponent finished as close as a touchdown, a 24-17 win in Berkeley against a team that finished 10-2. The 2017 Huskies have that one-TD loss at ASU, which is currently 6-5.

The 1991 Huskies won six times by 35 or more points. This year’s Huskies have three such wins.

The 1991 Huskies played the nation’s eighth-toughest schedule (107 Division I teams). UW’s strength of schedule this year: 78th out of 130 FBS schools.

The 1991 defense featured five NFL draft picks, including first rounders Emtman (Colts) and DB Dana Hall (49ers). No mock draft published so far has a Husky defender going in the first round of the 2018 draft.

If this year’s Huskies, who play at Stanford Friday night (7:30 p.m., FS1), had beaten unranked Arizona State, the defense would have had a chance to be considered the best in school history. But with that loss in Tempe, 1991 still serves as the standard against which all are judged.