The Seahawks drew 12 penalties in their 22-16 win over Arizona Thursday and are on pace to break the NFL’s single-season record. 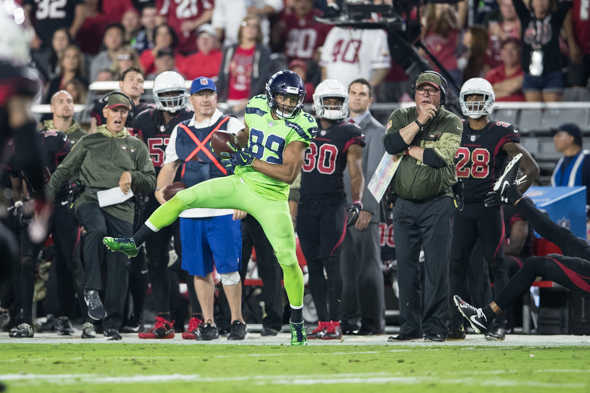 In front of Arizona coach Bruce Arians (hand to chin), Doug Baldwin made a sideline grab and turned it into a 54-yard gain that set up Seattle’s second TD Thursday in Arizona. / Drew McKenzie, Sportspress Northwest

Near the end of the first quarter Thursday night in Arizona, the Cardinals trailed the Seahawks 7-0 when they mounted their third drive of the game, starting at their 25. On second and 11, QB Drew Stanton missed badly on a throw intended for WR Jaron Brown, but DE Michael Bennett was dinged for a face mask infraction, giving Arizona a first down on its 39. And then more nonsense happened.

Then, on first and 10 from the Seattle 33, DT Sheldon Richardson was called for roughing ‘ Stanton, helping set up a 14-yard TD pass to TE Jermaine Gresham, tying the score 7-7. With four fouls, the defense all but gifted Arizona the touchdown.

The Seahawks went on to win 22-16 despite losing All-Pro CB Richard Sherman to a season-ending Achilles rupture (see Thiel: Seahawks get a win, but lose Sherman) and despite a continuation of rules-breaking that threatens to be historic.

It’s all about the  penalties.

A week ago, in a never-should-have-happened loss to the Washington Redskins at CenturyLink Field, Seattle incurred a season-high 16 penalties (one shy of the club record against Green Bay in 1984) for 138 yards. Two weeks before that, against the New York Giants, the Seahawks were docked 15 times for 110 yards.

The Seahawks also have more penalties than the Redskins (45) and Carolina Panthers (39) combined (84). They have 93 more penalty yards (780) than the Panthers and Redskins  combined (687). Among NFL leaders, this is where the Seahawks rank in several penalty categories:

These are the most-flagged teams in the first nine games of a season since the merger:

That would also break the NFL’s single-season record, 163 by Oakland in 2011.

During Pete Carroll’s eight years as head coach, the Seahawks have led the NFL in penalties twice, in 2013 and 2014, both Super Bowl years. They have been in the top 10 in penalties five other times, all but one of those playoff years.

The Seahawks have always been able to overcome penalties. Somehow, this year seems different.