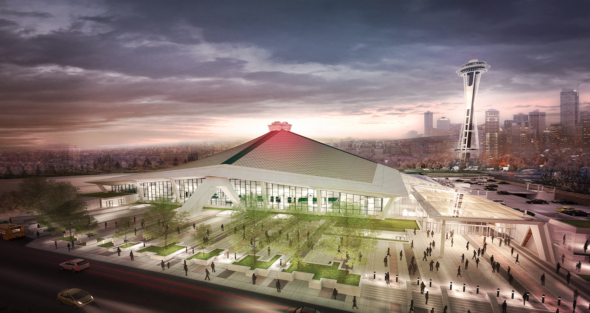 If Debora Juarez slammed the door any harder Thursday, she would have joined Mariners pitchers Felix Hernandez and Hisashi Iwakuma on the 60-day disabled list with messed-up shoulders.

The Seattle City Council member spent more than three hours chairing a meeting of the Select Committee on Civic Arenas — a small misnomer because it should be singular, not plural — and was tired, hungry and in no mood to re-consider an idea, the proposed arena in Sodo, that threatened the project she had just helped advance.

“I voted on that 18 months ago and voted no. It’s done. It’s over,” she said, speaking firmly of the council’s May 2016 vote of 5-4 that denied the Sodo project a street vacation. “I’m looking forward. That’s a failed MOU.

“I’ll be frank with you. The street vacation is yesterday’s news. I don’t know what to tell you about that. This is about looking forward to Seattle Center, KeyArena, and hopefully bringing a basketball team back and a hockey team. I don’t care what happened in the last 18 months. That’s the past. I’d like to leave it there.”

With that, she looked at reporters and said, “Anything else?” in a tone that suggested she wasn’t serious about further interrogation, turned and walked out of council chambers. Dikembe Mutombo is a little taller, but he couldn’t have swatted away developer Chris Hansen’s shot more forcefully.

Juarez and four other council members voted unanimously to advance a draft memorandum of understanding to a full council vote Dec. 4 on a proposed $660 million do-over of the 55-year-old Key Arena by the Oak View Group of Los Angeles. Approval is expected.

The step Thursday was not a final green light for the MOU. But the meeting would have been an opportunity for the independent consultants or council members with serious concerns about the financing, design or impacts of the project to make them known publicly.

The last of the 13 amendments to the MOU under consideration Thursday — most were items about bureaucratic language and questions about relatively small amounts of funding — was a proposal to eliminate the MOU’s exclusivity clause, a demand by OVG that the city “will not provide financial support, benefits or incentives . . . with respect to the construction of any live entertainment venue with a capacity of more than 15,000 seats within the city of Seattle.”

That easily could be construed as the granting of a street vacation for Hansen’s project, which OVG appeared to see, at minimum, a complication, and more likely a direct threat.

Juarez claimed she was unaware of source of the proposed amendment.

“Some of the amendments came up that I don’t know the origins of,” she said. “Some constituents spoke to particular council members.”

If that were true, then why bother?

The council voted unanimously to take no action on adopting the amendment, quietly and bureaucratically slipping the shiv to five years of work by Hansen’s team. Thwarting Hansen’s revised, all-private proposal at the committee level is a convenient way to clear the way for the party Dec. 4 — the day after the expiration of Hansen’s MOU with the city signed five years and four mayors ago.

Before the vote, the council heard from 40 members of the public, the vast majority using their two minutes at the podium to heap praise on the council and OVG for the KeyArena plan. Only three or four advocated for Sodo.

The day’s biggest passion came from the skateboard community, which feared the demolition of the skate park on the campus’s southeast corner without relocation would wipe out what they most value at Seattle Center. Their concerns went unaddressed in the subsequent discussion of amendments.

Juarez, who said the committee had seven meetings over the past eight months, was eager to let it be known that the council had done its due diligence.

“We really wanted the public to see we had experts lined up — to use a sports analogy, a deep bench,” she said, citing the presence in chambers of independent consultants Carl Hirsh of Stafford Sports LLC and David Stone, whose previous work in 2014 about the Key’s viability in a report for arena developer AECOM ignited the process. “It’s not a done deal. It’s a non-binding, proposed MOU. We have a lot of work ahead of us.

“I’ve heard concerns offline from some of my colleagues, some of whom weren’t here. But I’m OK going forward. I’m really excited. I’m hopeful we can have a hockey team and a basketball team.”

As to an NHL franchise, for which OVG CEO Tim Leiweke has lined up two prospective purchasers, investment banker and University of Washington grad David Bonderman and film producer Jerry Bruckheimer, Juarez was asked if council had been guaranteed a team.

“I think what we’ve learned from (consultants) and other people who are equity investors, has been very clear to us. They love Seattle. They want to have a business in Seattle. They love the whole 12th man craziness over sports. They know that this is an incredibly profitable market. I think it’s pretty glaring that we don’t have an NBA team and NHL team. People see that that’s a vacuum they want to fill.

But as good investors know, there are no sure things.

Even as the committee deliberated, news came from Washington D.C., that the Republican-led Tax Reform Bill passed the House Thursday. A provision in the bill eliminates the Historic Preservation Tax Credit, which OVG seeks because preserving the Key’s original roof, designated as a landmark, would mean $70 million in tax credits to the project.

Hirsh confirmed to council member R0b Johnson that the proposed tax credit was 10 percent of the arena budget. If the Senate passes the reform bill into law, Johnson asked if that was an issue for OVG.

Hirsh said the project partners would simply pour in more private money. No one gasped, applauded or asked for elaboration about how a sudden hole of 10 percent in the budget was no threat to the project’s financial viability.