Rare air for Huskies, Cougars in the Apple Cup

Washington and Washington State enter the Apple Cup with just four combined losses, making this one of the most high-profile games in the history of the rivalry. 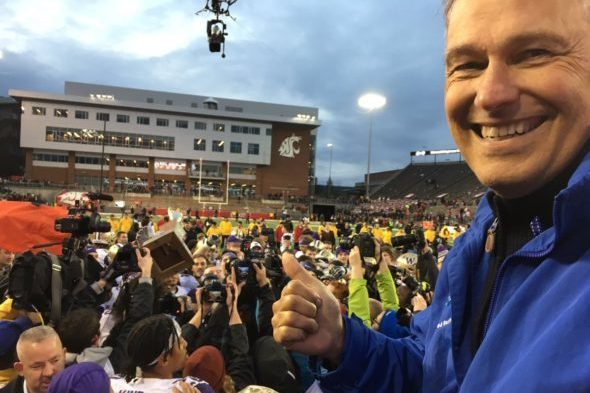 Gov. Jay Inslee happily sent off the Apple Cup trophy to a sea of Huskies players and fans last year at Martin Stadium. / Office of the Governor

Midway through the college football season, before Washington State unraveled at California 37-3 and Washington stumbled 13-7 at Arizona State Oct. 13-14, the local sports talk shows were salivating over the Nov. 25 Apple Cup.  The schools were off to 6-0 starts that had never happened in the 108 years of  annual mutual invective and head-banging.

The Associated Press ranked Washington No. 5 and Washington State No. 8, the first time both simultaneously occupied spots in the poll’s top 10. No other Pac-12 school was higher than 13th (USC).

As it turned out, that was as good as it got. Two weeks after losing at Cal, the Cougars were drilled at Arizona 58-37. The Huskies ran their record to 8-1 before falling to Stanford 30-22 two weeks ago, a loss that not only took UW out of control of the Pac-12 North race, but squashed any chance it had of returning to the College Football Playoffs.

The four combined losses (each school is 9-2, 6-2) would seem to remove much of the polish from Saturday’s 109th Apple Cup, but that’s not really the case.

A win would send the Cougars, instead of Stanford, to the Pac-12 title game Dec. 1 in Santa Clara, CA., for the first time. A win over USC, a team WSU defeated in Pullman 30-27 Sept. 29, would also give the Cougars a chance for an AP Top 10 finish, a rarity in Pullman history, and a shot at one of 12 slots  in the New Year’s Day bowls.

In only two of the rivalry’s 108 years the teams entered the Apple Cup with fewer combined defeats. In 1981, the Huskies quarterback was Steve Pelluer vs. WSU’s Ricky Turner,  and in 2001 it was Cody Pickett vs. Jason Gesser.

In seven other seasons, including this one, the teams had four combined losses, and twice they had five. Fewest combined losses by the two schools entering the Apple Cup:

In the games listed, Washington State won only twice when the Apple Cup was contested in Seattle. The first was 1945, which preceded the official adoption of the Apple Cup designation (1962).

In addition to the four combined defeats, the Huskies and Cougars have met as ranked opponents only six times since AP began publishing polls in 1936. But Saturday will be the first time that both enter the game ranked among the 15 best teams in the country (No. 14 WSU vs. No. 15 UW).