The Seahawks rallied from an 11-point deficit with 3:52 to play, but came up short on a field goal and lost to the Falcons 34-31 Monday night. 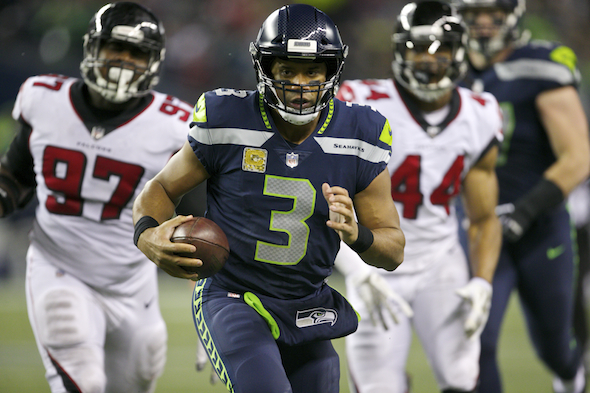 Russell Wilson had two touchdown passes and ran for another in a 34-31 loss to the Falcons Monday night. / Drew Sellers, Sportspress Northwest

Playing for only the seventh time since 2011 without Legion of Boom members Richard Sherman and Kam Chancellor, the Seahawks couldn’t contain Atlanta QB Matt Ryan, who directed four scoring drives in the second half to lead the Falcons to a 34-31 win over the injury-compromised Seahawks Monday night at CenturyLink Field (box). Seattle had a good shot at the end, but couldn’t quite pull it out.

Playing from behind the whole game, the Seahawks trailed 34-23 with 3:52 remaining, but QB Russell Wilson directed in typical fashion a five-play, 79-yard drive in a mere 49 seconds, finishing with a 29-yard touchdown pass to WR Doug Baldwin. After snuffing Atlanta’s next possession, the Seahawks had a chance to send the game into overtime with seven seconds remaining, but kicker Blair Walsh came up two feet short on a 52-yard field goal.

A win would have moved the Seahawks into sole possession of first place in the NFC West at 7-3. Instead, they fell to 6-4 and ceded the current No. 6 seed in the NFC playoffs to the Falcons, also 6-4 after the Monday night win. If the playoffs started today, Seattle is out.

Although Wilson passed for two touchdowns and ran for another, two first-half misplays contributed heavily to Seattle’s demise. In the first quarter, Atlanta CB and former Washington Husky Desmond Trufant picked off a Wilson pass intended for WR Tyler Lockett and returned it 44 yards, setting up a Ryan TD toss to Mohamed Sanu for a 14-0 lead.

In the second quarter, a strip sack of Wilson and Adrian Clayborn’s 10-yard fumble return for a TD staked Atlanta to a 21-7 lead.

The story might have been different if Seattle had been able to stop Ryan from converting so many third downs — Atlanta was 9-for-14 — or if they avoide a few of the nine penalties for 106 yards. The outcome might have also been different if, at the end of the first half, coach Pete Carroll hadn’t opted to fake a field goal attempt from 35 yards out. The play was botched, and the lost three points proved decisive.

Wilson completed 26 of 42 passes for 258 yards, two TDs, one pick and a passer rating of 85.2. His TDs covered four yards to TE Jimmy Graham and 29 yards to Baldwin. Wilson also led Seattle in rushing with 86 yards on seven carries. Wilson’s rushing score in the second quarter was his second of the year but only the third by Seattle this season. It also marked Seattle’s first rushing TD since Wilson and J.D. McKissic both tallied against Indianapolis Oct. 1.

Minus Wilson, the Seahawks managed 50 rushing yards, including 30 by McKissic and 18 by new starter Mike Davis, just signed off the practice squad. Davis also had 41 receiving yards before leaving the game with a groin injury of undetermined severity. Eddie Lacy, returning from a groin injury. carried three times for two yards.

Graham’s four-yard TD snag in the first quarter was his seventh scoring catch of the season, all of them in the past six games. Graham had seven receptions for 58 yards on 11 targets while Paul Richardson (56 yards) and McKissic (23) both caught five passes.

Largely due to Wilson, Seattle generated 360 total yards to Atlanta’s 279.

The 10-yard fumble return for a TD by Clayborn was the first such play against Seattle since Akeem Ayers of the Rams in 2015 (45 yards).

Ryan exploited the absences of Sherman and Chancellor to record a 115.5 passer rating. Entering the game, the Seahawks had held opposing quarterbacks to a 76.9 rating. Ryan threw two TDs without a pick and was sacked once.

Sheldon Richardsonhad the only sack of Ryan, with two minutes to play, forcing a punt that gave Seattle a chance with 1:14 left for the drive to futile field goal

Seattle lost for the first time in eight Monday night games under Pete Carroll and dropped to 23-4-1 in all prime-time games under Carroll . . . The Seahawks also had their 11-game winning streak in Monday night games snapped . . . Wilson had a chance to win his 63rd start, which would have broken a tie with Joe Flacco for most wins by a quarterback in the first six seasons of a career . . . Wilson fell to 6-1 on Monday night. He missed a shot at tying Neil O’Donnell (7-0) for the best mark ever on Monday night . . . The Seahawks lead the Falcons 10-6 in regular-season games . . . Seattle is 37-7 at home since 2012.