Seahawks need to clean this up, but can’t

The Seahawks had 106 yards in penalties Monday — again — to become the first team in the Super Bowl era to have five consecutive games with 100+ penalty yards. 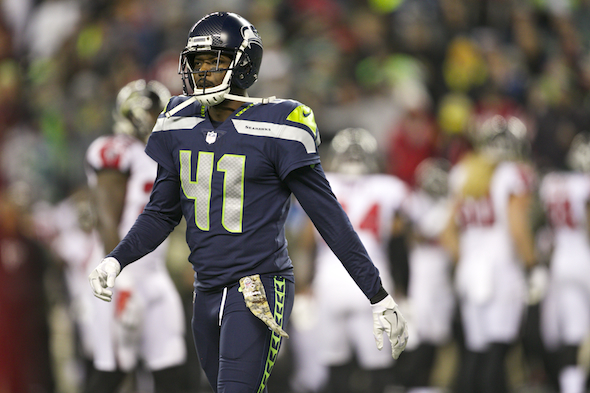 CB Byron Maxwell came off the bench for 59 snaps (95 percent) in his first game back with the  Seahawks Monday — and had a pass interference penalty. / Drew Sellers, Sportspress Northwest

While Pete Carroll’s well-intentioned but dubious play calling, especially on the fake field goal attempt before halftime (see Thiel: Valiant Seahawks lose on Carroll’s calls), has dominated local sports talk since the Seahawks botched an opportunity to knock off the Atlanta Falcons Monday night at CenturyLink Field, another factor contributed to Seattle’s 34-31 loss.

No, not Blair Walsh coming up short on a 52-yard field goal. Even though it was less than 24 hours after former Seahawk Stephen Hauschka, now in the employ of the Buffalo Bills, extended his streak of 50+-yard makes to an NFL-record 13 in a row against San Diego.

And, no, not Carroll inexplicably burning a second-half timeout by challenging an incomplete-pass call on WR Doug Baldwin. The drop was eminently clear to three-year-old children in the streets of Sedro Woolley without need for TV review.

The factor was nine penalties. They forced the Seahawks to give up 106 yards, including 10 on the final flag, a holding call during a punt return, which back Seattle’s final drive that ended with Walsh’s inches-short miss with seven seconds left.

Put another way, the Seahawks have more penalties (103) than the Washington Redskins (56) and Carolina Panthers (45) have combined. Even network announcers, paid huge coin to emphasize the positive and promote all things on behalf of the league, are aghast at the numbers, and no longer hesitate to say so.

We knew, and have commented upon in previous posts, that trend. But significant about Monday night’s game was that the Seahawks topped 100 yards in penalties for the fifth time this season.

In the Super Bowl era, which dates to the mid-1960s, only two other franchises, including the Raiders twice, produced five games in a single season with 100+ yards in penalties, meaning that Seattle has tied the league record with six games to play.

There’s no evidence that the Seahawks won’t end up owning that record for a good century or so.

All those 100-yard penalty games occurred consecutively. Before this boggling streak, no Seattle team had been docked 100+ yards in five consecutive contests. Closest to five: The 1984 Seahawks had three games in a row of runaway crime.

But there’s more here than a franchise record.

Five in a row is the most consecutive 100-yard penalty games in the Super Bowl era. The 1984 Seahawks are tied for No. 2.

QB Russell Wilson didn’t produce the best statistical game of his career against the Falcons, finishing with 258 passing yards, two TDS and one pick, plus a strip sack that resulted in an Atlanta fumble-return TD.

But he had another outstanding fourth quarter. He engineered a 75-yard drive in less than a minute, without benefit of a timeout. It concluded with a TD pass to Doug Baldwin, cutting the Falcons’ lead to 34-31 with three minutes to play.

The score was Wilson’s 13th of the season in the fourth quarter. He has only one interception. Add in 912 passing yards and Wilson has a passer rating of 133.0 in the final quarter through 10 games.

This is not to suggest that Wilson is the best quarterback, but only to show that, so far, he is the most efficient fourth-quarter passer in the past 25 years.  And his 2015 production was nearly as impressive.