No Frei, no problem: Sounders win big in Houston

A pair of well-placed crosses allowed Gustav Svensson and Will Bruin to deliver scores in a big 2-0 win in Houston Tuesday that put the Dynamo in a deep hole coming to Seattle. 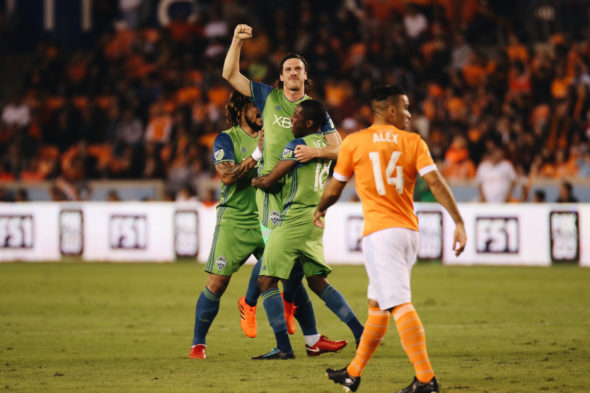 Entering the first leg of the MLS Western Conference finals Tuesday, the Sounders had never won a match against the Dynamo in Houston. Thanks to an early goal and a crucial penalty kick decision, the Sounders filled in that blank in their history, and took a large step toward returning to the MLS Cup finals with a 2-0 victory in front of a record sellout crowd (22,667) at BBVA Compass Stadium.

Happy with the win, coach Brian Schmetzer still felt his team could have returned home for the second leg with an even greater advantage.

“We tried to dictate tempo, and it manifested in a good way for us,” Schmetzer said. “We’re pleased with the result, but we could have played better in the second half. My message to the group is we understood that we could have put that game away at 3-0, and then it would have been more challenging for Houston.

“You cannot fall asleep for any moment. This league, this Houston team, it’s not over yet. What we have to understand is that we could have played a little bit better, and we would have had a bit more ability to improvise tactics (in the second leg).”

As the lineups went out, eyebrows shot up at the exclusion of starting keeper and MLS shutout leader Stefan Frei, who sat out after injuring his hamstring in practice Sunday, forcing backup Tyler Miller, 24, to make his third career start and first since July 19.

In the end, there wasn’t much for Miller to do, finishing with three saves as Seattle posted its fifth shutout in a row.

Seattle nabbed a crucial road goal in the 11th minute, when Gustav Svensson met a Nico Lodeiro corner kick from the left side and headed it to the back post.

Problems compounded for Houston in the 28th minute, when Lodeiro slid a through ball past the Dynamo back line and played Joevin Jones into a one-on-one with keeper Joe Willis. Former Sounders defender Jalil Anibaba hauled down Jones, earning a straight red card and ejection from referee Chris Penso, who awarded Seattle a penalty kick.

Houston forward Alberth Elis protested, earning him a yellow card that means he will miss the second leg in Seattle Nov. 30. Still, the moment did not entirely doom the hosts, as Willis dove to his left to parry Lodeiro’s kick.

The Sounders scored again three minutes before halftime, when Jones put a pinpoint cross on the head of former Dynamo player Will Bruin, who redirected the ball to the top left corner to double up his old club.

Only a yellow card to Roman Torres for a foul in the 88th minute served as a blemish on the evening for Seattle. Torres will miss the second leg in Seattle (7:30 p.m., ESPN) due to playoff card accumulation.

Still, Schmetzer predicted that his squad, 10-2-6 in its last 18 matches across all competitions, would be firing on all cylinders when the conference final’s second act begins.

“Coming home, we will look to control the game,” he said. “That team is too dangerous to sit back and let them dictate tempo on our home field. That would be a mistake.”