Thiel: Cougars no match at all for Huskies

The Huskies were good, but the Cougars were so bad in the Apple Cup that one wonders how Washington State pulled off its 9-3 record. 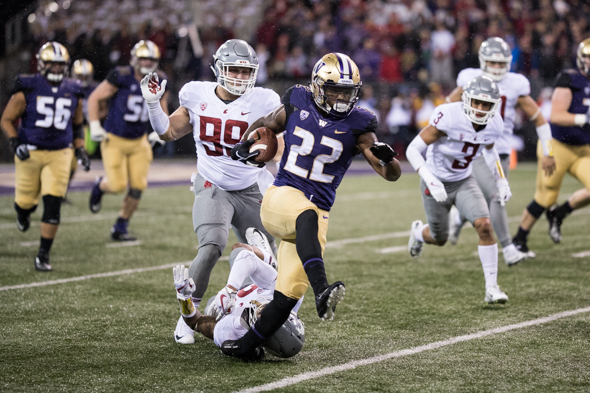 In terms of anti-climaxes, the Apple Cup Saturday night made a run at Y2K, a lot of sound and fury signifying nothing. Ruthless as was Washington’s defense and relentless as was the Huskies offense, the utter inability of the Washington State Cougars to play to the level of a 2-9 team, much less the 9-2 team they were, was bewildering.

“It is disappointing,” Cougars RB Jamal Morrow said. “You play this whole season for it to come down to this game, and to play like we did, it sucks.”

Suck they did, a 41-14 pasting that was far easier than the final score — 7-0 after one quarter, 24-0 at half, 31-0 after three. QB Luke Falk, the Pac-12 Conference’s all-time passing leader, was for the most part errant, erratic and ineffectual. His mentor and sometime-antagonist, coach Mike Leach, had no real explanation.

“I saw about three different Luke Falks today,” he said. “I saw the first-half guy, which that guy was a complete stranger.  In the middle of the game, just a guy struggling to get on track. Which I thought he courageously did. And then I saw the Luke Falk at the end, and that’s the guy I’m a lot more familiar with.”

That is a peculiar answer, which is hardly a surprise for a Leach riposte. How a presumably healthy senior quarterback can be so seemingly unprepared, and his coach so surprised, is remarkable.

For everyone else, the rare air around the 110th renewal — both teams ranked in the top 15 with 9-2 records, and with the Cougars’ berth in the Pac-12 championship in the balance — created serious anticipation on both sides of the state, propelling a sellout crowd of 71,265 that didn’t care that it sat in a game-long puddle.

At least until halftime, when it was plain that WSU, despite the advantage of a bye, seemed as if they thought they were playing Portland State on Labor Day.

On the other hand, the Huskies were prepared, as they always seem to be for this game. The fifth win in the row in the series makes the combined score 199-61.

So much for the Air Raid offense, whose prime virtue gives lower-resourced teams a chance to be competitive by spreading the field and using short passes as most teams use rushing plays.

But it is readily defended by teams with superior athletes, especially on both sides of the line of scrimmage.

Falk had three interceptions, lost a fumble, was sacked five times for 38 yards in losses and hit numerous times after releasing. His sack numbers left the Cougars with a minus-24 yards rushing, an Apple Cup record low and UW’s fifth-best in school history.

Leading the charge was DT Vita Vea, a fourth-year junior who may have played himself into the first round of the NFL draft. Vea required double-teams and still pushed them back into Falk’s face mask.

Playing behind him, LB Keishawn Bierria had a good look at the devastation, almost all done by the three down linemen, which allowed eight defenders to drop back in coverage.

“Usually you see a 350-pounder and you think, run stopper,” he said. “Yes, he does that. But he also creates pressure. (Fellow DT) Greg Gaines created a lot of pressure. The (edge linebackers) were creating pressure, sending three-man pressures. It was all working. It makes the job so much easier for those of us playing behind him.”

Among the beneficiaries was S JoJo McIntosh, who had his first interception of the season in the first quarter, returning it 33 yards. He said the Huskies were well-schooled in the predictable Cougars offense.

“We knew we had to play these guys different than we play anyone else,” he said. “They throw for a lot of yardage and get the ball downfield and score.

“We had to play them man-to-man, and we knew every play that they ran tonight. We prepared really well.”

On offense, the Huskies’ assets were drained quickly with injury losses of two key players: No. 1 WR Dante Pettis and No. 2 RB Lavon Coleman had to be helped off the field with ankle injuries. Coach Chris Petersen said there no broken bones but declined to say more.

What he could say was that he was thrilled with the production against the 11th-ranked defense in the nation.

“The offensive coaches did an awesome job putting that plan together,” he said. “(The Cougars) are hard to block. We protected gaps for our running backs. We knew if we could get things started and avoid getting hit in the backfield, which Washington State is very good at, we were going to have a chance.

“We did a good job for most of the night. It’s hard to not get negative yards against those guys.”

It was, however, easy to get negative about the Cougars, but Petersen naturally didn’t go there. He took a moment to gush about the rare sellout crowd and a strong finish to a 10-2 season that at the moment looks destined to finish in San Antonio at the Alamo Bowl.

“When that stadium feels like that, it’s an automatic boost,” he said. “It hasn’t always felt like that. When it’s packed, it’s completely different for those kids. When you come for warmups, you can feel it. And that is when it is truly the greatest setting in college football.”

The Cougars, meanwhile, have a probable engagement in San Francisco at the Foster Farms Bowl after their tidy 9-3 record. But after another Apple Cup hammering, they have every right to wonder how they reached 9-3.