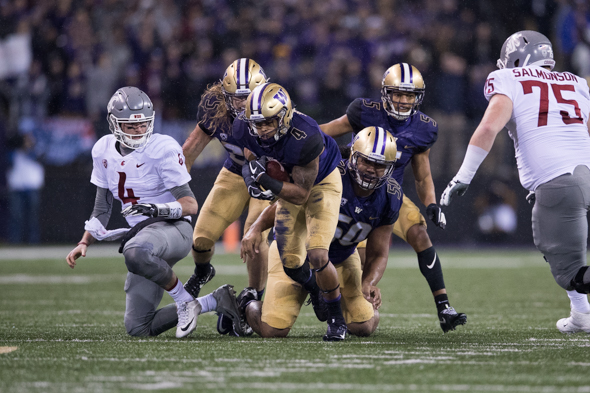 Mike Leach sounded as if he worried what a team of middle-schoolers would do to his Washington State Cougars if they failed to focus. But it was the Washington Huskies who tore them to shreds Saturday night. QB Luke Falk was the MMP: Most Mauled Player, throwing three picks, coughing up a fumble and getting sacked five times for a loss of 38 yards in a 41-14 demolition in front of a capacity crowd of 71,265 at Husky Stadium.

Leach was asked if he sensed that a blowout was in store for his 9-2 Cougars.

“I had sense that this could be coming if we played Molly Putz Junior High School,” Leach said. “You go out there, you do your job collectively, that’s team sports. The one thing that is true about us that we’re very thin. Our first-level guys play extremely hard, and when we do that, we can beat anybody. If we aren’t in sync at a high level, we get normal very quickly with some teams.

“I don’t think the whole team played well at any position. If you did, I’d be curious to know who it was, because I’d be happy to go pat that guy on the back and say, ‘Look, everyone else played like hell but you did really good.’ But that’s really not the game I saw out there.”

After stumbling into three-and-outs on their first two drives, the Cougars seemed to get things rolling before Falk overthrew his target on second-and-long and served up his first pick to JoJo McIntosh for a 33-yard return.

WSU’s ensuing possession was equally dismal. Three plays in, Falk scrambled for a first down, only to have the ball jarred loose on contact from LB Keishawn Bierria, giving the Huskies possession at the WSU 28-yard line.

Trailing 24-0 with 1:32 left in the half, Falk looked more comfortable, moving 44 yards in five plays before heaving a ball deep with 23 seconds left that fell into the hands of S Ezekiel Turner, crushing the visitors’ hopes of getting points before halftime.

After a three-and-out to start the second half, hopes of a comeback grew slimmer as Washington extended its lead to 27-0. The door slammed shut when Falk lost sight of LB Ben Burr-Kirven in shallow coverage, who jumped a pass intended for WR Kyle Sweet for a turnover that led to another touchdown.

The Huskies scored 14 points off the four turnovers. Both drives began inside the WSU 30-yard line.

Falk was 37-of-55 for 369 yards for a passer rating 118.7 and an adjusted quarterback rating of 32.9. The numbers were buffed by two late drives with the game out of hand, covering 88 and 74 yards and resulting in the only points of the night.

Asked if pulling Falk in favor of sophomore backup Tyler Hilinski would have helped his faltering offense, Leach cast a wider net of blame.

“If just (Falk is) playing poorly, then it’s an individual thing,” Leach said. “I thought our entire team played poorly. Somehow, as coaches, we weren’t able to get the anxiety out of their heads and get the best performance out of them. We played anxious, we played frantic . . .

“The team as a whole needed to settle down. It wasn’t a Luke-specific problem. I could have stuck Hilinksi in there and let the D-line massacre him too. The first quarter, I thought we could get (Falk) regrouped, and then I thought halftime. We weren’t able to.”