Washington received a two-spot bump to No. 13 while WSU crashed seven spots to No. 21 in the Associated Press college football poll released Sunday. 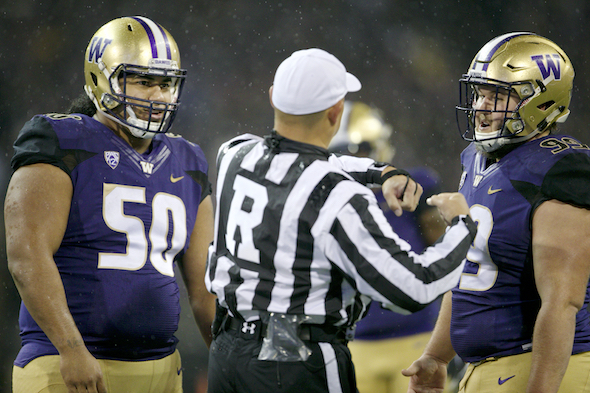 Washington rose two spots to No. 13 while Washington State plunged seven places to No. 21 in the Associated Press college football rankings released Sunday. The Huskies (10-2, 7-2) made the move after crushing the Cougars (9-3, 7-3) 41-14 in the 110th Apple Cup Saturday night in Seattle.

Washington’s win denied WSU a spot in the Pac-12 championship game opposite South champion USC (10-2, 8-1). Stanford (9-3, 7-2), which defeated Washington and lost to Washington State during the regular season, will represent the Pac-12 North. The Trojans came in at No. 11 while Stanford is No. 20.

Washington collected 764 points from AP voters, up from last week’s 735.

With Alabama and Miami losing Saturday, the AP poll featured new teams at the top. Defending national champion Clemson is No. 1 followed by No. 2 Oklahoma. Undefeated Wisconsin is No. 3. No. 4 Auburn is followed by the Crimson Tide. Auburn has knocked off two No. 1 teams in the past three weeks.

In the coaches poll, Washington advanced one spot from 14th to 13th while Washington State tumbled seven places to No. 22. USC gained one place to No. 9 and Stanford jumped five spots to No. 15 after its 30-28 victory over Notre Dame.