Hosting the 10-1 Eagles Sunday night, the Seahawks only once in 41-plus years have beaten a team with 10+ wins and a .900-plus win percentage. 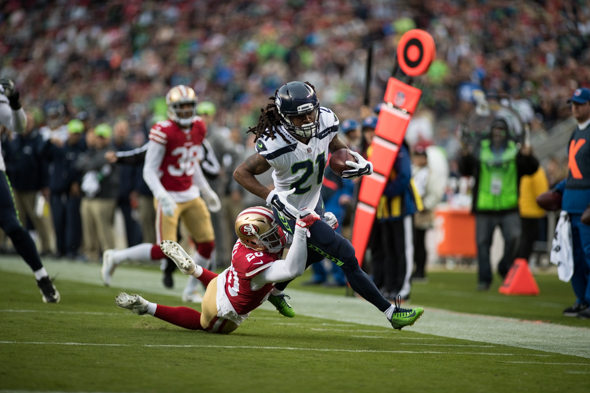 After grinding out a 24-13 win over one-win San Francisco, the Seahawks return to CenturyLink Field for a Sunday night game against the Philadelphia Eagles, through 11 weeks the NFC’s best team. The Eagles have the top mark in the NFL at 10-1 and are coming off nine consecutive victories, including three 28-point wins, 37-9 over Dallas, 51-23 over Denver, and 31-3 over Chicago.

The 84-point margin (119-35), the most in a month of three games (the Eagles played only three times in November) since the San Francisco 49ers outscored three foes 122-38 in November of 1993, according to Elias.

Philadelphia enters Sunday night’s contest with the league’s No. 1-scoring offense at 31.9 points per game, the No. 3-scoring defense at 17.4, and the front-runner for the Most Valuable Player award in QB Carson Wentz, who has 28 touchdown passes against five interceptions.

The Seahawks are 8-7 all-time against Philadelphia and have taken the past three in a row, all by a margin of at least 10 points, including a 26-15 decision last year at the Clink. But they have never defeated a Philadelphia team with a record this good.

Since their inaugural year of 1976, the Seahawks have only seven regular-season victories over teams with 10-plus wins and three or fewer losses. They most recently did it Jan. 3, 2016 in the final regular game of 2015. That day, Seattle knocked off 13-2 Arizona 36-6 in a game in which Bruce Arians rested many of his starters, including QB Carson Palmer.

A victory over the 10-1 Eagles would be Seattle’s second over a team with double-digit wins and a .900-plus winning percentage.

The top triumphs in franchise history over 10-plus win teams (Rec = record of the opponent at the time of kickoff):

After improving to 7-4 Sunday, the Seahawks would hold the NFC’s seventh playoff seed if there were seven seeds. There are not. Atlanta holds the sixth and final one by virtue of defeating Seattle two Mondays ago at the Clink. Counting the Eagles, Seattle’s season-ending slate includes Jacksonville (7-4) and Dallas (5-6) on the road and the Los Angeles Rams (8-3) and Arizona (5-6) at home.

So the Seahawks play three teams with winning records among their final five. Through 11 games, they’ve beaten only one team with a winning mark, the Rams.

After throwing a first-pass pick at San Francisco Sunday, Russell Wilson went on to pad his portfolio in a more positive manner. He won his 63rd regular-season start, most in NFL history by a quarterback in his first six seasons. He threw his 150th career TD pass, becoming one of only four quarterbacks to do that in six seasons or less.

Wilson also improved to 23-4 (.852) in his career in games following a loss, the best mark by a starting quarterback since the 1970 pro football merger. With 228 passing yards, Wilson became the fourth quarterback in history to exceed 3,000 yards in each of his first six seasons. Those who did that:

Noteworthy is that Wilson has played in a run-first offense most of his career. And yet, he is the only one of the four to improve his pass yardage totals every year. This season, he’s on a pace for 4,400-plus yards, which would be a career high and his third consecutive season of 4,000 yards.

Two Mondays ago, Blair Walsh came up short on a 52-yard field goal attempt with seven seconds left that probably would have sent the Atlanta game into overtime. Sunday, Walsh’s first attempt, a 48-yarder, missed as well. He later made a 34-yarder and now is 18-for-24 this season, which happens to be the fourth-worst mark by a Seattle kicker in the past quarter of a century.