Sounders poised for win, then on to Toronto

After a two-goal advantage on the road in the first leg, the Sounders return home Thursday for the second match against Houston. A win means an MLS Cup rematch in Toronto. 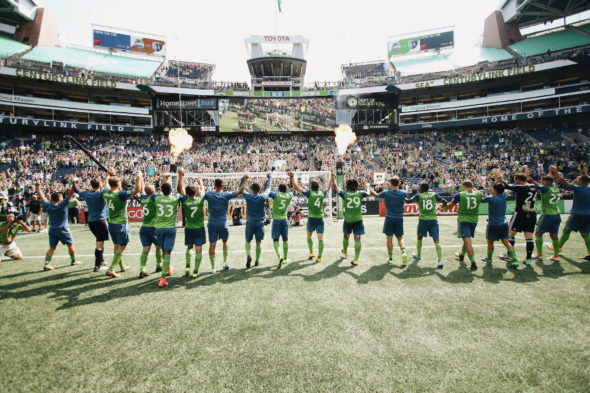 After a convincing 2-0 win on the road in the first leg of the Western Conference finals, the Seattle Sounders seem poised to push through for a MLS Cup rematch in Canada Dec. 9 after Toronto FC defeated the Columbus Crew in the Eastern finals Wednesday. Coach Brian Schmetzer isn’t letting his team sleep on the Houston Dynamo, despite the fact that his side hasn’t conceded a goal in its last 452 minutes of play.

Asked what he expected of Wilmer Cabrera’s side in Thursday’s second leg at CenturyLink Field (7:30 p.m., ESPN), Schmetzer acknowledged the danger of looking past the fourth-seeded Dynamo.

“(I expect) a motivated team,” Schmetzer said. “Wilmer has made his team believe they can win any game. That’s what makes them dangerous. He’s done a great job. I know (Toronto FC head coach) Greg Vanney got manager of the year because of their record. But sometimes the guys that deal with less resources, you’ve got to give them some credit. Wilmer has done a great job with less resources than we might have, or Toronto or some of the bigger spenders in the league.”

Still, Houston did not seem prepared to answer the bell in the first leg, a 2-0 thrashing that had the potential to be much worse for the hosts, who now have lost Jalil Anibaba and Alberth Elis for the second leg on card suspensions.

The defending champion Sounders will be without center back Roman Torres, also out on yellow card accumulation after being cautioned for a late foul in the second half of the first leg.

It is unclear whether Schmetzer will ask jack-of-all-trades Gustav Svensson to fill the gap in the back line, or tap 24-year-old Tony Alfaro. Schmetzer gave his younger players a vote of confidence in the first leg by slotting Tyler Miller in at goalkeeper after starter Stefan Frei was scratched from the lineup due to a hamstring injury.

Much will be resolved if defensive midfielder Osvaldo Alonso is deemed healthy enough to start. Alonso, long regarded as the heart of the Sounders midfield, has not started a game since Sept. 27 with a lingering quad injury.

Per his customary tight-lipped remarks about injuries, Schmetzer said that he would prefer to have Frei, Alonso and young forward Jordan Morris back on the field if they were all healthy, but they would all be game-time decisions.

Despite the tactical uncertainties, Schmetzer said his team was relishing the chance of hoisting the Western Conference trophy at home after last year’s low playoff seed meant a diminished road celebration in Colorado.

“The relationship between the players and the fans is something special,” he said. “We have an opportunity to do something special tomorrow night. We would be very happy to get a result and have them share in our success.”