After Thursday’s dominant win over Houston to advance to the MLS Cup to defend their title, the Sounders’ 2-5-4 start is hardly remembered. It was all part of the plan. 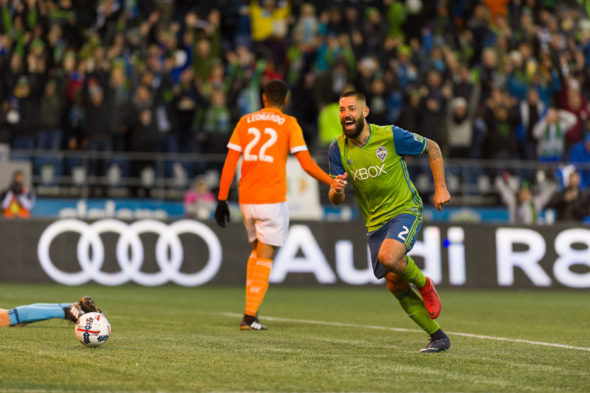 In mid-May, the Sounders lost a third consecutive game (3-0 to Sporting Kansas City) to drop to 2-5-4, a certain sign that the perils of defending an MLS championship had consigned them to the hellfires of soccer condemnation.

“We had some dark days then,” said coach Brian Schmetzer.

But by the final day of November, the hellfires had become celebratory fireworks. The Sounders were Western Conference champions again, this time at their riotous home before the second largest crowd (45,298) in the club’s postseason history.

Overwhelming the Houston Dynamo 3-0 Thursday night for a 5-0 aggregate triumph, the Sounders were equal parts artful, efficient and tough, demonstrating an uptick in play well beyond the frantic run of 2016.

On Dec. 9, they meet, again, Eastern Conference champion Toronto, coming off probably the most dominant regular season in league history, for the MLS Cup. This time, the Sounders enter as a more poised, youthful and balanced outfit, promising a more compelling drama in the rematch than the 0-0 draw in the deep cold at BMO Field, decided on the randomness of penalty kicks.

“All the goals were well-crafted, good soccer plays,” said Schmetzer, smiling, after Thursday’s domination.  The scores were accompanied by a defense that has not allowed a score in 647 minutes, longest streak in league playoff history.

Before the match, general manager Garth Lagerwey reflected on the seasonal narrative whose nadir was reached after the loss at KC.

“People were saying, ‘We just won the title, why are we struggling?'” he said. “We were willing to be criticized because we had a long-term plan. We stuck with it.”

The plan began the morning after the Sounders secured their first championship. At 9 o’clock at the team hotel, Lagerwey convened a meeting of team officials whose agenda included purging 13 players from the 30-man roster in a bid to get younger and deeper.

“The instinct after we won was to bring back everyone because, ‘We won it, we deserve it,’ he said. “That group out-played their potential — holy cow. We made some really hard calls. We had to make it younger.

“Before we got on the charter, Brian and I met with everyone on the team. Some meetings were good, some not so good. Some really good people — Ivanschitz, Friberg, Valdez, Mears, Gomez, Scott — guys who really put in for the group, weren’t coming back.”

Then they had to make some allowance for superstar Clint Dempsey, who missed the playoff run with an irregular heartbeat that was treated with two procedures. Would he come back? If so, when? At what strength?

“Clint had to work so hard physically to come back from that,” Lagerwey said. “And he had to go through a process where he had to ask, ‘Do I trust my body again? Can I put pedal to the metal and nothing (bad) will happen?’ Then he had to come back as a soccer player.

“We’re all glad it worked out, but talk about contingencies you can’t plan for. We couldn’t  go into the season saying Clint’s going to play 30 games. It might have been zero. We didn’t think that, but we had to plan for it.”

As Dempsey grew strong again — enough eventually to be named MLS comeback player of the year — the Sounders kept open spots on the 30-man roster for the summer’s international transfer window. Lagerwey brought in Victor Rodriguez of Spain and Kelvin Leerdam of The Netherlands, then pushed Nouhou, the 20-year-old prodigy from Cameroon, from S2 to the bench to the starting lineup.

Starting on the Fourth of July, the Sounders played 12 matches without a loss. After a modest lull of two losses in three, they have not lost since Oct. 1. Despite regular injury absences of stalwarts Brad Evans, Ozzie Alonso and Jordan Morris (who finally returned to action in the final 14 minutes Thursday), the Sounders’ plan worked.

In contrast to the injury woes that crippled the Mariners season and are wreaking havoc with the Seahawks, the Sounders have worked their way back to the pinnacle despite missing many parts of a championship team.

“We needed to be willing to be criticized early,” Lagerway said. “We didn’t want to settle for imperfect long-term choices, even if it meant going short-handed at the beginning of the season. We needed the cap space and the roster spots, then added Leerdam, Rodriguez and (domestic returnee) Lamar Neagle.”

Compared to the clattering ride of 2016, that included firing their only MLS head coach, Sigi Schmid, and promoting Schmetzer, then scrambling into the playoffs in the last moment, the Sounders have built a steady crescendo that has led to a return to the summit’s ridge.

“This group,” Schmetzer said evenly, “is ready to compete for a championship.”

As has often been said, the hardest thing in team sports is to repeat as champions. After Thursday night, no one can say the Sounders aren’t well-built and well-prepared to do the deed.