No deal — yet — between Leach and Tennessee

According to multiple reports, Mike Leach has had discussions about becoming head coach at Tennessee, but no deal has been struck yet. 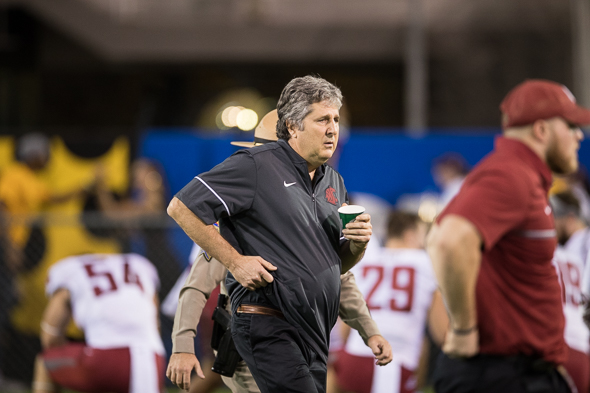 Washington State University football coach Mike Leach has met with University of Tennessee athletic officials about becoming the Volunteers’ head coach, but no deal has been struck, according to reporting by ESPN. Leach and Tennessee athletic director John Currie talked about the job Thursday in Los Angeles, where Leach was on a recruiting trip.

After their meeting, Currie returned to Knoxville and Leach flew back to Pullman. Currie and Tennessee officials have discussed numerous candidates to replace Butch Jones, fired Nov. 12.

According to the Seattle Times, Leach’s meeting with Currie was first reported by A to Z Sports Nashville. Also, a Dallas Forth-Worth reporter tweeted that Leach was “working on a deal to become the next head coach at Tennessee,” adding that a deal could be announced as early as Friday.

Tennessee came close to hiring Ohio State defensive coordinator Greg Schiano, but the deal fell through due to backlash from fans and supporters, incensed by his alleged role in the cover-up of the sex-abuse crimes by Jerry Sandusky at Penn State, where both were assistant coaches.

When Leach emerged last week as a potential candidate to replace Jones, WSU president Kirk Schulz reportedly met with athletic department officials and decided that if Leach departed, they would pursue defensive coordinator Alex Grinch to replace him. ESPN Thursday said that the Cougars have offered Leach a contract extension and that Leach “was underwhelmed by the offer.”

Leach is 38-37 in six years at WSU but 26-12 in his past three. After finishing the regular season 9-3, WSU will find out its bowl fate Sunday. The Cougars have been projected to play in the Foster Farm Bowl in San Francisco Dec. 27.