TE Jimmy Graham did next-to-nothing as a scoring threat in his first 31 games as a Seahawk. Now he’s the hottest red zone player in the NFL. 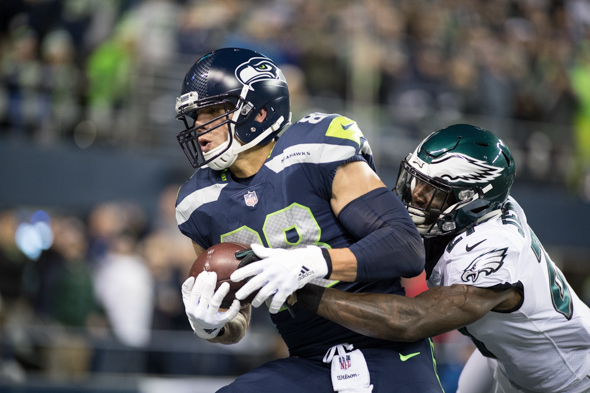 In Seattle’s 24-10 upset of the six-point favorite Philadelphia Eagles Sunday night at CenturyLink Field, TE Jimmy Graham had a mere three catches for 26 yards, but continued to be QB Russell Wilson’s favorite target near the goal line. Graham snagged an 11-yard TD in the first quarter and has TDs in four consecutive contests.

But the bigger picture involves Graham’s last eight games: He has nine touchdowns. In Graham’s first 31 games as a Seahawk, he had eight.

As the late, great Los Angeles Times columnist Jim Murray might have said, this is the equivalent of a comatose patient suddenly leaping off a stretcher and chasing nurses down the hall.

During that 31-game stretch, Graham rarely was targeted by Wilson, leading to criticism of both Pete Carroll and offensive coordinator Darrell Bevell: They either didn’t know how to utilize Graham’s skills or simply didn’t care to try, so bent were they establishing a running game without Marshawn Lynch.

Critics even suggested that Graham’s acquisition from New Orleans for C Max Unger in 2015 was a bust, and that the Seahawks should trade him for anything they could get. That talk reached a crescendo in the days before the NFL trade deadline in October, which just about coincides with Wilson/Graham going off.

Graham’s nine red zone touchdowns (seven inside the 10-yard line) lead the NFL by two over Philadelphia TE Zach Ertz. If Graham ultimately leads the league in red zone TDs, he would become only the second tight end in the past 25 years to do that twice. Graham also led with 11 in 2013 while with the Saints. New England’s Rob Gronkowski led in 2010 and 2011.

Even if Graham doesn’t lead the league, he has a solid chance to accomplish a feat no other tight end in the Super Bowl era, including Gronkowski, has managed: Twice reach double figures in red zone touchdowns.

These are the most in a season by a tight end since the NFL-AFL merger in 1970 (RZ TD=red zone touchdowns):

Graham’s nine are also the most in a season by a Seattle tight end, with four games remaining. John Carlson (2009) had seven. Graham’s six last year rank third.

In addition to hitting Graham with an 11-yard TD pass in the first quarter Sunday night, Wilson threw a one-yard TD to Tyler Lockett and a 15-yard TD to J.D. McKissic. The three touchdown passes helped tie Atlanta’s Matt Ryan for third on the list of most passing TDs in the first six seasons of a quarterback’s career.

Ryan had 153 between 2009-13. Wilson has four games remaining in his sixth season. It’s highly unlikely that Wilson will catch No. 2 Peyton Manning, who had 167 TDs. No way will he approach Dan Marino, who tossed 196.

Wilson already is the leader in another, and perhaps more impressive, category: Most games with three or more touchdown passes and no interceptions in the first six years. Wilson has 16 such games, including Sunday night vs. the Eagles. The list:

Wilson’s pass to McKissic with 7:29 remaining to play pushed his fourth-quarter total this season to 15 against one interception. Wilson’s 15 last-period TDs are tied for first in NFL history with Eli Manning, who had 15 for the 2011 New York Giants (also six interceptions).

And finally, the ultimate illustration that the run-first era in Seattle is over: Wilson leads the NFL with 442 pass attempts (four more than Tom Brady’s 438). No Seahawk has led the NFL in that category since Jim Zorn had 439 attempts in 1976, the first year of the franchise.