City Council votes 7-1 in favor of Oak View Group’s $660 million plan to trick out KeyArena for concerts and the NHL. NBA? Maybe 2025. Maybe not. 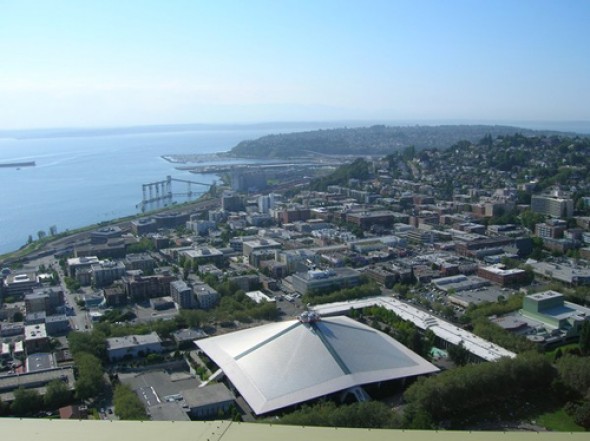 Get ready for another recycling of the dowager of lower Queen Anne. / Ballparks.com

Beaming from a front row seat at Seattle City Council chambers, Tim Leiweke witnessed an improbable dream come true Monday afternoon. As we say in the world of hockey, he lit the lamp.

At the end of a 2½-hour meeting, the CEO of Oak View Group watched as council members voted 7-1 to approve a memorandum of understanding for his audacious $660 million proposal: Converting 55-year-old KeyArena, in the middle of a rapidly growing urban village, into a global concert venue and sports arena on his own dime.

The vote sent the document to new Seattle mayor Jenny Durkan for her signature Wednesday. She said nothing substantive in her campaign regarding her views on the arena. But in her first full week in office, she is highly unlikely to veto this highly unlikely gift from a private contractor that has delighted city officials and crushed, for all intents and purposes, the five-year effort by developer Chris Hansen to build an arena in Sodo.

OVG believes it can begin demolition in 2018 and open for the NHL season in October 2020.

In two long sentences, here’s who won and lost and why:

Despite a congested arena location, Leiweke won because of a nearly unlimited supply of private money, a savvier approach in the political worlds of global sports and municipal government, and an informal partnership with a pro sports league that has no bad history in Seattle and a hole in its lineup.

Despite a more logical arena site, Hansen lost because he was unable to afford an arena and a team on his own, and didn’t find significant allies or effective strategies in the political worlds of global sports and municipal government to overcome the mess he inherited with Seattle’s business history in pro basketball, as well as the conflicts he developed with local adversaries.

From his nearly 40 years in the sports business, Leiweke knew the NHL had to be the first winter pro sports team in any new building in Seattle, or forever be consigned to little-brother status in a market with a 41-year history of the Seattle SuperSonics. After a rancorous split left a profound distaste for Seattle’s no-more-public-subsides-for-sports political culture, the NBA for now does not care whether it returns to Seattle.

In fact, the empty Seattle market was a valuable tool for the NBA in extorting other city governments in Sacramento and Milwaukee into helping fund, with much reluctance, new arenas for the Kings and Bucks.

The NHL needs a team in Seattle. The NBA needs an empty market in Seattle.

All the other elements in the drama that have developed since the 2008 poaching of the Sonics pale in comparison to that simple observation.

But the animus between Seattle and the NBA won’t last forever. In fact, an NBA source with knowledge of the league’s current long-range thinking told me that at the end of the   current $24 billion television rights agreement with ESPN and TNT following the 2024-25 season, NBA owners believe they will be ready to expand from 30 to 32 teams.

At the top of the list, in pencil, subject to change — Seattle and Mexico City.

A city employee who has been following the negotiations with OVG said that the NBA’s desired outcome is known around city hall. It makes some geographic and financial sense — Mexico City is the world’s fifth-largest city and and Seattle’s arena site is a mile or so from the world headquarters of Amazon, which by then figures to have purchased western Washington.

Leiweke will never confirm the league’s thinking, but he’s bragged up his pro sports connections so often that it’s hard to believe he would be oblivious to off-the-record talk of expansion plans. And he has been quite public in his ardor for Amazon.

Amazon abruptly has become a global leader in consumer entertainment. Leiweke aspires to have OVG supplant his hated former boss, Philip Anschutz of Anschutz Entertainment Group, as one of the world’s largest entertainment presenters. So it becomes easier to understand why Leiweke is willing, in a building he will not own, to gamble hundreds of millions of dollars, including covering all cost overruns on the Key renovation, to create a concerts-first venue: It’s a neighbor to the world headquarters of the retail/entertainment colossus.

Along with his equity partner in the Key remodel, concert promoter Live Nation, Leiweke’s OVG needs to win Seattle, the next big marketplace opportunity, to win the bigger turf war with rival AEG.

Given the scale of Leiweke’s ambitions, seducing a beleaguered city government with throw-ins such as $40 million for traffic solutions, and another $20 million to community non-profits (see list below), is chump change.

The fact that Leiweke played Santa Claus to so many constituencies in and around Seattle Center to earn their blessings is part of how council president Bruce Harrell swung around his support from Hansen to Leiweke.

In May 2016, before the Key project had momentum or Leiweke, Harrell was one of four council members to vote yes to Hansen’s request for the street vacation he needed for siting his arena. Hansen lost the vote 5-4 when council member Lorena Gonzalez, in a rambling, nervous speech in which she said “she stuggled with the issue a lot,” broke the tie.

Gonzalez, said to be traveling, was the only council member absent Monday.

In explaining his yes vote Monday, Harrell said, “This is one of the strongest (arena) deals in the country . . .  We should have a state of the art arena that will attract a lot of musical events. It’s not contingent upon teams, but puts us in the driver’s seat to attract that kind of activity.

“What’s critically important is the community events and groups that are part of this deal that will foster racial equity and social justice and provide benefits to the communities affected by this arena. This has in it programs for youth, arts, sports, music and cultural events.”

As with most council members and city staffers, Harrell saw for Seattle Center, its users and the neighborhoods. a basket of privately funded goodies, not a basketball team.

Electeds have a responsibility to maintain and upgrade Seattle Center, a department of the city. The attraction to the OVG plan is understandable and proper.

It is also true that this same body voted in 2008 to accept $45 million from Sonics owner Clay Bennett to break the KeyArena lease and let the Sonics go to Oklahoma City. They did so despite holding a likely winning hand in a landlord-tenant lawsuit. Then as now, the council had other priorities, thus setting in motion over the past nine years all the complicated events surrounding the so-far-futile return of pro basketball.

It is also the same body that in 1994 agreed to use $77 million in 20-year construction bonds to turn the World’s Fair relic Coliseum into KeyArena. The council also agreed to give then-Sonics owner Barry Ackerley a 15-year lease. The five-year difference between the lease and the bond debt, which was scheduled to last until 2015, is what made the franchise so attractive to Bennett when he purchased it in 2006.

The worst-case scenario for Bennett was that he could operate the team in Seattle for four years, then take the team to Oklahoma City. He slickered the council and escaped in two.

All of the council’s dubious history with the arena doesn’t mean that OVG’s deal isn’t the greatest thing to hit Seattle since rubber boots. But when I hear Harrell, a former University of Washington football player, describe basketball and hockey as “that kind of activity,” I get the sense he has the same priorities now as in 2008, when he voted to let the Sonics go.

That’s OK. There’s many more important agenda items for the council than what amounts to a hood ornament on the civic car. But council members, and OVG, would serve more honestly the market’s many basketball fans if they simply dropped the idea of a return of the NBA as any kind of community virtue or priority.