Loose Sounders ready for the cold and Toronto

Same teams, same site, same stakes — an MLS Cup. Sounders and Toronto will have a go in the Canadian cold, with a chance for the Sounders to make national and civic history. 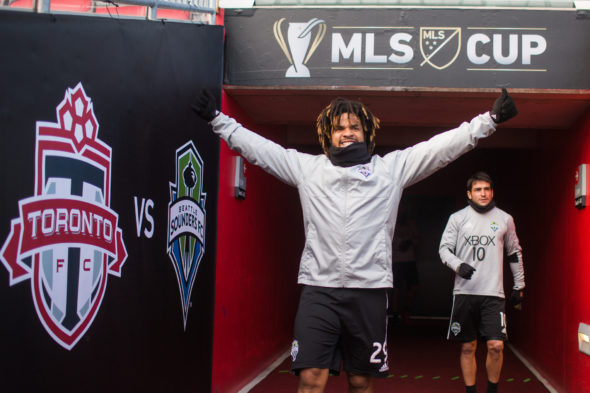 TORONTO – Ahead of the Sounders’ final practice of the year Friday, something needed to be done to ease the stress of defending their MLS championship in the the same place it was won, at BMO Field. So Roman Torres, to the delight of all, decided to re-enact his championship-winning penalty kick that brought Seattle its first title.

“The guys are tired of training,” coach Brian Schmetzer told reporters. “We wanted today to be light and fun. He picks up on the vibe that coaches give. That’s just Roman being Roman.”

Now comes the serious part: The MLS Cup rematch with Toronto FC (1 p.m. PT, ESPN) on a cold afternoon —  25 to 35 degrees with a 20 percent chance of snow — for the opportunity to make a little history.

They would also achieve unique status in Seattle sports lore, becoming the first major professional sports franchise to two-peat. The NBA SuperSonics in 1978-1979 and the NFL Seahawks in 2014-2015 each had a chance for a deuce but came up short.

Aside from Torres’ amusements, Schmetzer acknowledged that championship jitters would be present in his squad, as well as the hosts.

“There’s pressure on both teams,” Schmetzer said. “Every professional sports team in a final, there is some level of pressure. You guys can gauge how much TFC has and how much we have. My players will be feeling butterflies when the whistle blows. Those are normal feelings to have. Hopefully, you turn that nervous energy into adrenaline, and it helps you.

“But it’s a very, very big game. We are relaxed out here, because we’ve been here before. We won here. When the referee blows the whistle, we will be laser-focused.”

Scheduled for a little earlier start this go-round, the hope is the cold won’t cripple each team’s fast-paced attack. Any snow that accumulates could be a problem, although the field is heated. The league has brought fluorescent orange balls to replace the regulation white in case things become untenable. A decision will be made on which color to use in the hour before kickoff.

For the Sounders, longtime leader Ozzie Alonso will remain sidelined with a quad injury that has kept him out since late September. Another star of last season’s win, Jordan Morris, saw his first action in two months in the second leg of the Houston series as a 14-minute substitute.

But the hamstring injury that hampered him may deny him an appearance Saturday.

“Jordan’s participation in the match will be dictated by what happens in the game,’’ Schmetzer said. “He may not play.”

Schmetzer also has a game-time decision to make on the back line, now that Torres is back from a one-game suspension and midfielder Victor Rodriguez is healthy.

The Sounders have had late-season success with speedy 20-year-old Nohou at left back, helping the defense post six consecutive clean sheets and an ongoing MLS playoff record 647 consecutive minutes without allowing a score. The temptation is to go with the veterans in the ultimate match, but the rookie from Cameroon has handled nearly all he has been given.

Last year for the Cup, a crowd of 36,045 overflowed BMO Field, which has a listed soccer capacity of 30,000. But they didn’t see Clint Dempsey, who was dealing with an irregular heartbeat and missed the entire playoff run.

Saturday they will see a fully engaged Dempsey, who has never been on the field for an MLS championship win, including early-career missed chances with the New England Revolution. Now healthy and relatively rested, Dempsey was the Sounders’ regular-season scoring leader with 12 goals and was named the league’s comeback player of the year.

After the U.S. Men’s National Team was eliminated from contention for the 2018 World Cup, Dempsey at 34 may see the match Saturday as perhaps a last, best chance to grab title hardware.

How fitting it would be to have The Deuce lead the way to a deuce.