A game-ending melee likely will result in suspensions for a couple of Seahawks, who almost made it back from a 27-10 hole. Can’t live off a Wilson-led miracle every Sunday. 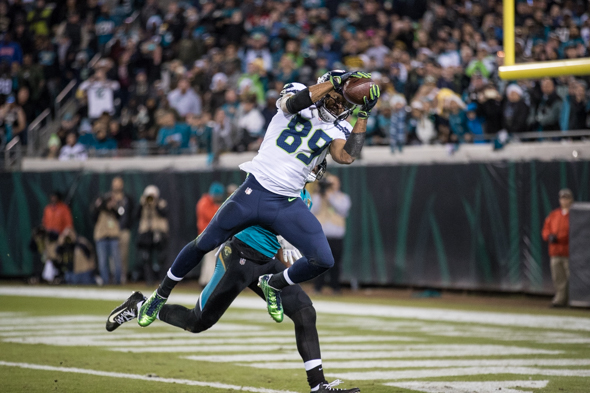 After twice bombing the Jaguars with long touchdown passes to turn a laugher into a crier, QB Russell Wilson offered up a trenchant observation.

“They were terrified, a little bit,” he said. They should have been.

Wilson had just become the greatest single-season thrower of fourth-quarter touchdown passes in NFL history with 16, and was driving for No. 17 — the third one this game.

Then the Jags’ terror flipped to Seahawks’ agony.

On 4th-and-9 at the Seattle 43 with 2:19 remaining, officials missed not just one but two pass interference penalties on the final play. Either one would have kept alive a potential game-winning drive.

Instead the pass was ruled incomplete, and the ball went over on downs.

Then everything went to hell for everyone — players, coaches, fans, referees.

Jacksonville won the fraught saloon brawl, 30-24, as all, including the NFL, lost when the final moments descended into shoves, punches, penalties and ejections.

Seahawks reserve DT Quinton Jefferson struck the lowest note in the mayhem went he became a member of the Ron Artest Hall of Dubiousness, pushing through security to attempt to scale the grandstand seeking a fan who had thrown what appeared to be a plastic bottle that struck him. Moments earlier, he had been ejected from the game for unnecessary roughness.

Or as they call such a scene in the National Hockey League, to which Seattle seems destined for entry, Tuesday.

DE Michael Bennett also invited a suspension when he appeared to go after the knees of center Brandon Linder as Jacksonville went into victory formation on its final possession. Then he went back at Linder’s legs at play’s end, which drew a confrontation with Jags RB Leonard Fournette.

In the locker room, Bennett shooed away reporters who tried to talk to Jefferson:

#Seahawks Michael Bennett intervenes as reporters try to talk to Quinton Jefferson after he was ejected from their ga https://t.co/xb3yYf2gLf

Even Seahawks coach Pete Carroll was busted for unsportsmanlike conduct after he left the sidelines to admonish his own players, a gesture that, as with many things Seahawks Sunday, happened too late.

“I was trying to get our guys not to carry on further,” Carroll said of the melee that climaxed game-long confrontations between the teams and saw DT Sheldon Richardson ejected for throwing a punch. “There wasn’t a chance (to get the ball back). I was just trying to slow them down . . . to make a statement to our guys that we wanted us to finish without any more garbage happening out there.”

Asked about Jefferson’s actions, Carroll said, “He just kind of lost it. Somebody poured a beer on his head while he was leaving the stadium. I told him, ‘That’s pro football. (Fans)  pay to get in, they can do anything they want, I guess.”

Indeed, some Jags fan hurled food and other objects toward the Seahawks sideline as tensions built between 8-4 teams each playing for playoff stakes. The Seahawks finished with six penalties and 73 lost yards, the Jags seven for 48, and the NFL with two black eyes.

The fights and ejections did disservice to a contest that, in contrast to the expectations for a struggle between two top defensive teams, delivered multiple haymakers after a taut first half that Jacksonville led 3-0.

“It’s really unfortunate how it ends, all the scrapping,” said Carroll. It could be really unfortunate for the Seahawks if suspensions follow their misbehaviors, because the loss itself didn’t do serious damage to their annual season priority, winning the division title.

The NFC West-leading Rams lost Sunday in Los Angeles 43-35 to Philadelphia. That means they are 9-4 entering the next game Sunday in Seattle against the 8-5 Seahawks, who have already beaten the Rams. A sweep by Seattle of the season series breaks the tie.

But no one was certain after Sunday who will be able to show up for the Rams game. Besides possible suspensions, Seattle’s two top linebackers, Bobby Wagner (hamstring) and K.J. Wright (concussion), had to leave the game in the second half. RB Mike Davis, who on four consecutive plays had runs of 21, 13, 10 and five yards against the NFL’s No. 1 defense, had to leave game with sore ribs, but returned.

The injuries, compounded with three interceptions of Wilson, the penalties and the loss of discipline, contributed to a 27-10 deficit with less than 10 minutes remaining. Even when Wilson did his usual fourth-quarter thing with touchdown passes of 61 yards to Paul Richardson and 74 yards to Tyler Lockett, the hole was too deep.

“We saw how many things we gave that made it hard for us,” Carroll said. “When you turn it over three times, give up a huge play in the kicking game (72-yard punt return by former Huskies WR Jaydon Mickens), a huge play against our run defense (34-yard run by Chris Ivory, former Cougar), it’s hard to win. But our guys didn’t stop. I’m really proud of that.”

In fact, the Seahawks had a serious chance to win when the defense forced a three-and-out inside three minutes and down 30-24. Taking over at their own 42 with 2:39 left and two timeouts, another Wilson-led miracle seemed imminent.

But after an incompletion to Jimmy Graham, a pass to WR Doug Baldwin, who stepped out of bounds a yard shy of the first down, and a sack, the Seahawks were down to a last chance at fourth-and-1 with 2:19 left at their own 43.

A moment after Wilson took the snap, Richardson saw his defender, CB Aaron Colvin, start to fall down. Colvin knew it would be a touchdown, so he threw his arm back and hooked briefly Richardson’s mask, then tripped him. No foul call.

The #Jaguars just got away with a huge penalty… Aaron Colvin tripped #Seahawks Paul Richardson after he fell to the ground. Should still be Hawks ball here. #SEAvsJAX pic.twitter.com/PggShNiwSv

The second choice, Baldwin, appeared to collide with his defender as the pass went over both heads. Again, no call.

Furious, Carroll ran up the sidelines, beseeching the refs. To no avail. Wilson saw what happened and politely deferred criticism.

“It was definitely going to Paul,” Wilson said. “I thought that they kind of got him there. He beat the guy off the line of scrimmage. (Colvin) made a good play, in that he knew if he got beat, it was a touchdown. So he just grabbed him right away. Held him and everything else. It is unfortunate that we didn’t get that one.

“I’m not blaming the refs or anything like that. You can’t put it on one play.”

Quite true. The Seahawks have made a go of it this season largely on the back of Wilson. But almost everything has to go perfectly, and luckily, to pull off any comeback, much less down 17.

Yes, the Seahawks were thoroughly hosed on the final play. But they had numerous chances to take control of the game without having to rely on a last-minute,  high-wire act.

And now they get to find out this week who gets expelled from the circus before the game of the season.