The NFL will review the mayhem at the end of the Seahawks-Jaguars game. Meanwhile, coach Pete Carroll partially defended DE Michael Bennett’s play that was called dirty. 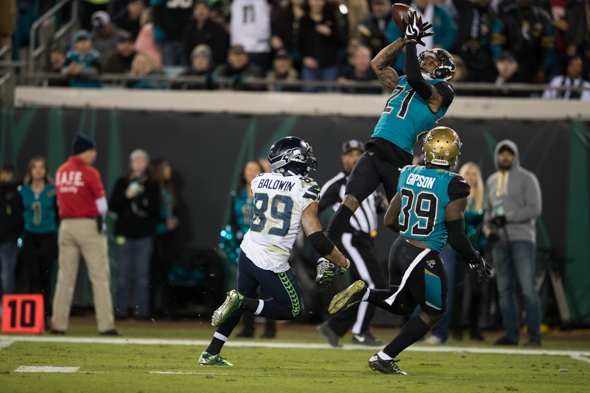 The NFL is investigating the controversial conclusion of the Seahawks-Jaguars game in Jacksonville Sunday after some fans threw objects at Seahawks players, who had two ejections for unsportsmanlike conduct and a third, DE Michael Bennett, criticized for a dirty play.

“I’m so disappointed with how it ended — it was ugly,” coach Pete Carroll said Monday on his weekly ESPN 710 radio show. “What happens is, we get so high, so jacked, the belief is so strong that we’ll come back and win. Everybody to a man thought it was going to happen.

“The big play that we got stopped on fourth down (a defensive hold on WR Paul Richardson with 2:19 left in the game that went uncalled) ignited it for us. We didn’t handle it very well. Unfortunately, there’s some stuff to learn.”

On Bennett’s play during the Jags’ victory formation that seemed to be a dive upon the legs of Jags C Brandon Linder, Carroll offered a partial defense that Bennett was trying to hit the ball upon snapping.

“I heard that in the broadcast they thought he rolled up on the guy; Mike was trying to swipe the snap,” Carroll said. “Timing it up. That’s what he was down on the ground for. We came hard, and (the Jags) took some concern. I get that. Unfortunately, the game was out of whack.”

But after the whistle blew, Bennett appeared to go after Linder’s legs, drawing a penalty.

“After they got held up, that’s what happened,” Carroll said. “Unfortunately it’s a bad situation.”

Upon his ejection, DE Quinton Jefferson responded to objects thrown by fans by attempting to climb into the grandstand to pursue his assailants before security people pulled him back.

“A home team does have responsibility for security,” Lockhart told NFL.com. “We work closely with all 32 of our clubs those issues. I think we are going to be looking in and talking to both clubs about a variety of things that happened in that game, particularly at the end where we had a series of ejections, on the field issues and then leaving the field.

“We will be working with the club to identify those who might’ve been involved in throwing objects and/or acting outside of rules that we expect from our fans. That has already begun, as well as in our football operations department looking at some of the on-field stuff. Nothing to report at this point.”

Jefferson after the game told reporters, “I’m walking. I’m not talking to nobody. I’m walking out. Someone throws a beer. Then someone throws another drink. What would you do?”

In the final seconds, Carroll also drew a 15-yard penalty for unsportsmanlike conduct after he went onto the field to demand his own players stop fighting.

“It’s not like you don’t know it’s the wrong way to go,” Carroll said. “It’s just that it got the better of us and we got too emotional. We run so hot sometimes. We have have to curb it, and we didn’t. That’s why I went on the field, to stop it before we lose somebody else.

“I knew the game was done then. There’d probably be a penalty, or whatever. I had to stop what was going on. I just had to take the hit on it.”

On the fourth-down play when CB Aaron Colvin fell backward guarding Richardson, then grabbed and tripped him, Carroll said the non-call was a heart-breaker. The Seahawks were down 30-24, and a completion would have meant at least a first down in Jags’ territory, and perhaps the game-tying touchdown.

“He didn’t see it the same way. That’s all there is to it,” said Carroll, who raged along the sideline, of his conversation with officials. “It’s happened that way several times this year and it’s really frustrating. It doesn’t mean anybody’s right or wrong. They’re working their tails off to do great. But sometimes it breaks your heart.

“That’s the chance to win the game, or maybe not. It’s part of it.”

Carroll was asked where he draws the line on player behavior.

“You can’t hurt your team,” he said. “Same with me — I gotta control myself. We all have to have the poise at the right time to make the right choices to walk that line. Sometimes they do, sometimes as they get affected, sometimes they lose it.

“The point is, there are guys right next to that guy to help that guy out. That’s how we operate. That’s what ‘protect the team’ is. You’re always in tune. Not everybody is always going to think clearly. When you’re next to him, you got to take care of him.”

Carroll agreed with the assessment of a Fox broadcaster that the contest between 8-4 teams had the chippy intensity of a playoff game.

“Very much so,” he said. “(The Jags) are trying to get on top of this thing, and they’re battling. They’re a feisty, tough, physical group. They weren’t going to take any garbage from anybody. They were out to do that. The whole night was that kind of game. We’re OK with that. We’re all right.

“Within that, maybe a young guy misinterprets something, or whatever. We had penalties that were not the kind you’ve seen us get. A shove on the sidelines (by TE Jimmy Graham); not a terrible thing, but it was a shove on the sidelines. (LT Germain Ifedi) was chirping (at an official over a holding call). Those were so far wrong, out of line. You can’t give up that kind of margin. Unfortunately, it happened.”