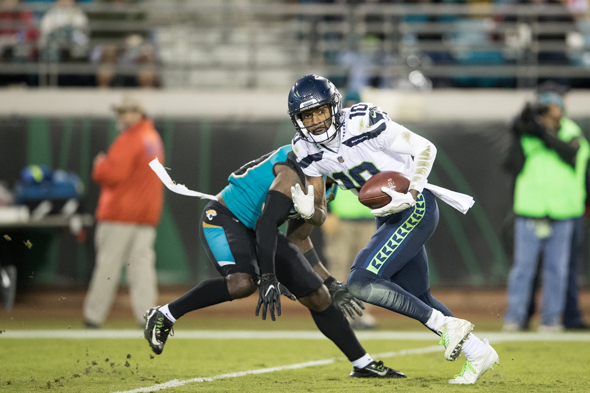 QB Russell Wilson exercised poor decision-making on two deep throws against Jacksonville Sunday, neither of which had much chance of succeeding. CB Jalen Ramsey picked off the first one in the second quarter on what was essentially a jump ball in the end zone with WR Doug Baldwin, and CB A.J. Bouye collected the other one in the third quarter on another 50-50 ball to Baldwin.

Playing possum in the third quarter, Bouye also baited Wilson into throwing a third pick when Wilson targeted TE Jimmy Graham near the sidelines. By the time Wilson made that turnover – only the fourth time in his career he tossed three or more in a game – the Seahawks trailed 24-10. Jacksonville quickly made it 27-10 by parlaying INT No. 3 into a 51-yard field goal.

“The interceptions were game-changing,” Ramsey said. “Super game-changing. Game-changing because it stopped their momentum and gave us momentum.”

Wilson entered the fourth quarter having, by his standards, an historically bad passing game with fewer than 150 yards and a rating under 50.0, vs. a career mark of 99.1.

But Wilson’s first pass of the fourth quarter went for 61 yards and a touchdown to WR Paul Richardson, cutting the lead to 27-17. After the Jaguars increased their lead to 30-17 on a 32-yard field goal, Wilson’s third pass of the period went 74 yards for a TD to WR Tyler Lockett, pulling Seattle to within 30-24.

For a variety of reasons, including a hold on Richardson during a pass attempt that wasn’t called, and some game-ending bedlam that colleague Art Thiel describes here and here, Wilson did not get another successful high-wire act in the closing minutes.

But the TD to Richardson, as was widely reported, was Wilson’s 16th of the year in the fourth quarter, breaking a tie with Eli Manning (2011) for most in NFL history. The TD to Lockett was Wilson’s 17th,  eight more than runner-up Matthew Stafford.

The bombs to Richardson and Lockett marked the first time in franchise history that a Seattle quarterback threw two fourth-quarter TD passes of at least 60 yards in the same game, and only the fourth time any quarterback did that once.

Wilson also did it in 2015 against Pittsburgh with an 80-yard, fourth-quarter TD to Baldwin. John Friesz teamed with Brian Blades for an 80-yard TD against Miami in 1996, and Dave Krieg connected with Ray Butler on a 67-yard TD at New England in 1986.

Since 1920, when the league included the Akron Pros and Rock Island Independents, it’s been done seven times:

Davidson threw both TDs to Dick Dorsey, and were the only two TDs of Dorsey’s 11-game pro career. Davidson went 10-for-25 for 273 yards. Davidson and Wilson are the only quarterbacks to do the feat in a loss. In 1962, Davidson had seven TDs all season against 23 interceptions.

Namath threw for 496 yards and six touchdowns in a head-to-head duel with Baltimore’s Johnny Unitas (376 yards, two TDs). Namath tossed both of his to Rich Caster. Namath also had a 67-yard TD to John Riggins in the second quarter.

Tarkenton’s TDs went to John Henderson (70 yards) and John Gilliam (66), famous in New Orleans for returning the first kickoff in Saints’ history (1967) 94 yards for a TD.

Fouts, who threw 30 career TDs against Seattle, teamed with Harrison Davis on a 70-yard score and with Don Woods on a 75-yarder.

Rypien, the former Washington State star, had an 82-yard TD to Gary Clark and a 64-yarder to Art Monk, finishing with 442 yards and a career-high six TD passes.

Warner, who also threw an 80-yard TD to Holt in the second quarter, finished with 366 yards. He opposed Atlanta’s Chris Chandler, who starred at the University of Washington in the mid-1980s.

Blair Walsh is not the worst kicker in Seahawks history, but he’s in the conversation after missing (again) from 38 yards Sunday on an attempt that would have tied the score 3-3 heading into intermission. Walsh has missed seven field goal tries. In case you forgot: 37 yards vs. Indianapolis, 39, 49 and 44 vs. Washington (in a 17-14 loss), 52 vs. Atlanta, 48 vs. San Francisco and 38 vs the Jaguars.

Walsh needs one to tie Brown with eight whiffs. To eclipse Lindell, Walsh would have to miss five field goal tries in three games, certainly doable given his three clanks against the Redskins.

Walsh and Peterson (1999) are the only kickers on this list to miss three in a season attempted from fewer than 40 yards.

The franchise mark for most misses in a season under 40 yards is four, by John Kasay in 1992 (eight total misses). So Walsh has a great shot at breaking that record.