The Seahawks (9-7) missed the playoffs for the first time since 2011 and face a long offseason in which the fates of several core players will be decided. 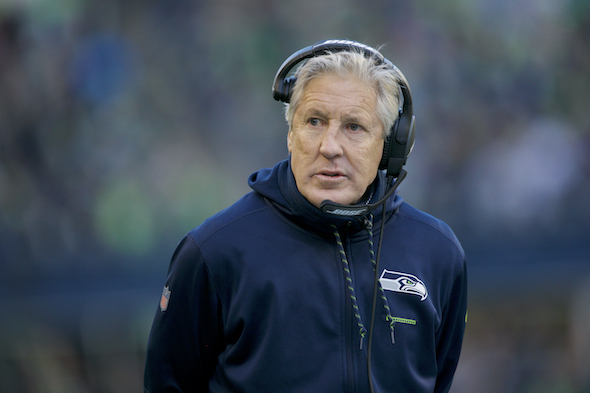 When the Seahawks were denied the NFL playoffs Sunday, their ouster ended one of the more remarkable runs in modern NFL history: five consecutive years with at least one playoff victory, coinciding with QB Russell Wilson’s tenure as the team’s starting quarterback. Now that Seattle won’t be extending its streak to six, the question is, what happens next — a reload or a remake?

One possible clue might be the short-term fate of the other six franchises that had playoff wins in five or more consecutive seasons following the end of their streaks. Mostly, it wasn’t pretty,  with New England serving as a notable exception.

The Patriots had playoff wins in every season from 2003 through 2007 before failing to qualify for postseason play in 2008 despite an 11-5 record. Since then, New England has won nine AFC East titles and failed to win a playoff game after only two seasons (2009, 2010).

Since 2011, the Patriots have playoff wins every year and have an excellent chance to do so again, given the home field advantage throughout the AFC playoffs.

Of the five franchises apart from Seattle that faced the end of a long playoff winning streak, only one won a Super Bowl and none became annual fixtures in the playoffs again until the Green Bay Packers made a successful transformation from Brett Favre to Aaron Rodgers.

These are the teams that won playoff games in five or more consecutive seasons and what happened next:

The 10 players on Seattle’s roster who have appeared in a Pro Bowl, including CB Richard Sherman and SS Kam Chancellor, both of whom ended the season on injured reserve, average 29.4 years.

Another reason for 12s to fret: The 49ers beat the Rams, 34–13, Sunday to conclude an undefeated December. Garappolo is 7–0 as a starter (two wins while with Patriots) and his 5–0 mark in December is remarkable: None among Joe Montana, Warren Moon, John Elway and Brett Favre, all Hall of Famers, won five starts in a month. Aaron Rodgers hasn’t done it, either.

“We’ve been (worst) in penalties before, when we won world championships,” said Pete Carroll after Sunday’s loss. “But this season, with the margin of error we had, we weren’t able to overcome that stuff. It’s just an area of our football that has to change. I got to get that done. I got to get that changed.”

Not only did RT Germain Ifedi lead all NFL players with 20 penalties (16 accepted), DE Michael Bennett finished in a tie for third with 12 (offside 10 times). Ifedi’s breakdown: nine false starts, eight holding, two unnecessary roughness, one taunting. Ifedi’s 16 flags are tied for the most by a player in the Carroll era. CB Brandon Browner also had 16 in 2011.

From Oct. 22 through Nov. 20, the Seahawks had 100 or more penalty yards in five consecutive games, the longest streak in the Super Bowl era. In that time, only two other teams (2010 Raiders, 2015 Ravens) had five such games. The Seahawks finished with 100+ penalty yards seven times, an NFL record.

Among the players not expected back in 2018 is kicker Blair Walsh, whose 48-yard miss in the final minute Sunday prevented Seattle from beating Arizona and finishing 2017 with 10 wins for a sixth consecutive year.

No NFL kicker missed more field goal attempts in 2017 than Walsh, although two missed as many. Walsh’s whiff Sunday was his eighth (21-for-29), a total matched in the NFC by Arizona’s Phil Dawson (32 for 40) and in the AFC by Denver’s Brandon McManus (24 for 32). It figures: Dawson kicked the winning field goal Sunday against the Seahawks.

Over the past 25 years, only two other Seattle kickers missed as many as eight field goals in a season (<40=number of missed field goals under 40 yards):

Walsh and Peterson (1999) are the only kickers on this list to miss three in a season attempted from fewer than 40 yards.