The Seahawks avoided an episode of high dubiousness when Mike Davis produced a 33-yard run Sunday against the Arizona Cardinals at the Clink. 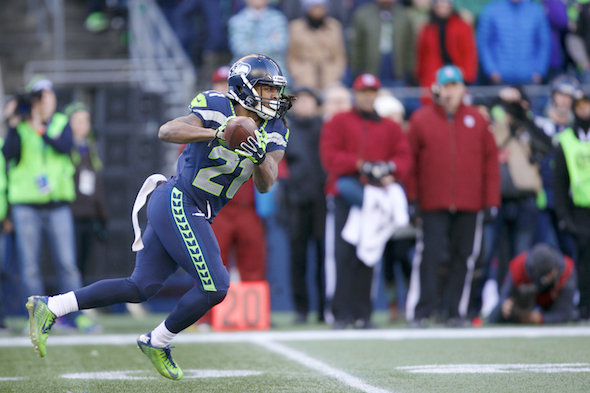 J.D. McKissic was the only Seattle running back with a rushing touchdown in 2017. / Drew Sellers, Sportspress Northwest

For purely face-saving purposes, the 33-yard run by Mike Davis near the end of the third quarter Sunday against Arizona will go down as one of Seattle’s most significant offensive plays of the 2017 season. It didn’t set up a touchdown and, in fact, led only to a Jon Ryan punt, but it helped Davis finish the year with 240 yards, making him Seattle’s leading rusher among running backs.

Without that gambol, Davis would have concluded Seattle’s 9-7 campaign with 207 yards, one fewer than the injured Chris Carson way back in September. For the Seahawks, the face-saving part is that Carson could have become the first NFL running back to lead a team in rushing for an entire season after participating in only four games.

Carson joined the Seahawks as a 2017 seventh-round draft pick out of Oklahoma State and received the bulk of the carries (49) in Seattle’s first four games, against Green Bay (39 yards), San Francisco (93), Tennessee (34) and Indianapolis (42). In the fourth quarter of the Seahawks’ 46-18 win over the Colts, Carson suffered a severe high-ankle sprain when his left leg was pinned in a pile. That led to surgery and Carson didn’t make it back this season.

With RBs Eddie Lacy and Thomas Rawls unable to get anything done, with C.J. Prosise injured and J.D. McKissic mostly confined to passing downs, the burden of Seattle’s running game fell to QB Russell Wilson, who accumulated most of his team-leading 586 yards on improvisational scrambles after Carson’s exit.

McKissic became the only Seattle running back to score a touchdown, tallying from 30 yards against the Colts shortly before Carson went down. That was that as far as TDs by running backs were concerned. The Seahawks became the only team since 1978, when the NFL adopted the 16-game schedule, to get just one rushing TD from their running backs.

Turns out Seattle is also the only team in the era of 16 games to get less than than 300 rushing yards from its lead running back. As noted, Davis led with 240. How lame is that?

The second-lowest, team-leading total by an NFL back in the past 40 years is 311 yards.

Without additional suspense, these running backs had the lowest, team-leading rushing totals since the NFL went to a 16-game slate in 1978:

Wilson’s 29-yarder to WR Doug Baldwin was his 19th fourth-quarter touchdown pass Sunday, an NFL single-season record. He had only one interception and a record 134.1 passer rating. The old TD record was 15 by Eli Manning in 2011. The previous best rating was 130.3 by Steve Young in 1994.

He also had a career-low rating in the first quarter this season at 74.5.

Wilson is not only the first Seattle quarterback to lead the NFL in scoring throws – he tied a career high with 34 – but only the sixth to do so on a non-playoff team.

Having gone without a playoff appearance since 1999, Buffalo owned the longest active postseason drought 17 years, in the big four of American sports leagues – NFL, NBA, NHL, MLB. But with the Bills qualifying for the playoffs Sunday, the Mariners move to the top of that list, having missed the postseason in each of their last 16 seasons. The Cleveland Browns own the next longest drought in the NFL at 15 years. The NBA’s longest belongs to the Minnesota Timberwolves at 13 years while the Carolina Hurricanes, at eight seasons, have the longest arid spell in the NHL.