Thiel: These are not happy times for the Pac-12

From international shoplifting to federal felony indictments to bad bowl play, the Pac-12 has taken a pounding. Now a hoops coach is being unkind to his lodge brother. 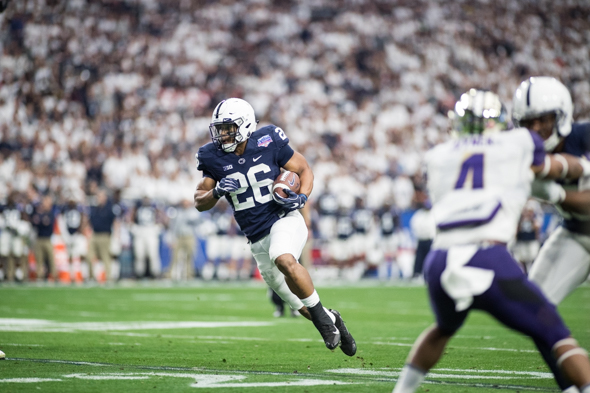 Penn State RB Saquon Barkley at the Fiesta Bowl was one of many opponents to run over the Pac-12 during the bowl season. / Drew McKenzie, Sportspress Northwest

The college football season ended Monday night in Atlanta with Alabama’s 26-23 victory over Georgia for the national title. Fun game. But for denizens of the Pac-12 Conference, they wished the season had ended right after the regular season.

That way, the critics could only speculate on the dubious competitive worth of Pac-12 football in 2017, instead of having it confirmed across the fruited plain by a 1-8 bowl record.

Sylvester the Cat had a better record against Tweety Bird.

Utah, 3-6 in conference play, was the lone victor, beating, I believe, the Trump University Geniuses 7-4 in double OT in the Underwhelm Bowl.

Washington State’s 25-point loss to Michigan State was the worst of the worst, while Stanford and Arizona lost by two and three points respectively. Arizona State, UCLA  and USC lost by 21, 18 and 17 points.

The 12th-ranked Washington Huskies’ 35-28 loss loss to ninth-ranked Penn State in the Fiesta Bowl looks respectable in the record book, but closer examination reveals the Huskies 10 days later are still picking rocks and sand from their flesh after being road-rashed into the desert floor in Arizona.

Earlier in the otherwise commendable 10-3 season, the Huskies burped up some unpleasantness when coach Chris Petersen’s unprompted complaints about so many night games drew mockery and scolding from ESPN broadcasters, who normally are shills for everything and everyone in the industry it virtually owns.

The dope-slapping from TV personalities Kirk Herbstreit (“they should be thanking us”) and Chris Fowler doesn’t happen to the other conferences. But three times zones away from Bristol apparently is the minimum safe distance for igniting oral ordnance on the left coasters.

Coupled with the episode in which the telecast of Washington’s large game at Stanford didn’t begin until the second quarter because FS1 wasn’t done showcasing a sparsely attended NASCAR truck race, and the league suddenly appears to outsiders as if it operates out of the trunk of a 1958 Buick Bulgemobile.

Men’s hoops provided a shiner in October when three UCLA players were busted in China for a shoplifting spree that became an embarrassing international incident.

Commissioner Larry Scott loves the Pac-12’s forays into China because it looks like progressive 21st-century branding. But when the host nation speculates that the five-finger discount is a degree program at American colleges, Scott looks like he’s taking marketing lessons from United Airlines’ passenger-dragging department.

On a much higher (lower?) level in September, the Pac-12 found itself deep into the scandal of the sports year — the FBI investigation that uncovered mass corruption, bribery and wire fraud among top college hoops programs engaging with shoe-company goombahs. Federal charges were brought against assistant coaches in four big-time programs, including Arizona and USC.

Thus the Pac-12 had half the field in the Penal Four.

An explainer, via si.com, of the charges and indicted individuals can be found here.

Naturally, the head coaches in all four programs claim innocence, ignorance and disbelief at what has gone on at the hoops casinos on their watches. But that doesn’t mean their Pac-12 rivals aren’t using the pending cases to their advantage.

Saturday in Boulder, 10-6 Colorado upset 14th-ranked Arizona 80-77. After the game, Buffs coach Tad Boyle was remarkably candid in his delight at sticking it to the alleged outlaws from Tombstone.

Asked if he took extra satisfaction in beating Arizona as the scandal hangs over the program, Boyle said,  “Absolutely. It’s ironic we’re playing Arizona. I’ve got great respect for (head coach) Sean Miller and the type of coach he is. They recruit very, very well. USC has recruited very, very well. The two most talented teams in our league from top to bottom are USC and Arizona.

Boyle’s boldness is certainly admirable, but Scott has to be shocked that one of the lodge brothers has gone rogue on the premier hoops program that is already hip deep in federales.

The breadth and depth of the FBI investigation suggests that a whole lot more programs than the four so far identified are at risk of discovery for similar misdeeds. Scott and Boyle both have to hope there’s no funny shoe money being passed to recruits in Boulder.

But at least Boyle’s indiscreet contempt will make for some compelling theater at the rematch in Tucson Jan. 25. The apprehension about that day is obvious: FS1 might find another truck race to broadcast instead of the post-game fistfight between Miller and Boyle.

It’s true that the events of the last several months are random, and somewhat beyond the reach of a league commissioner. At least Scott can sleep comfortably knowing that the revenues produced by his major achievement, the Pac-12 Networks, are keeping schools and fans happy.