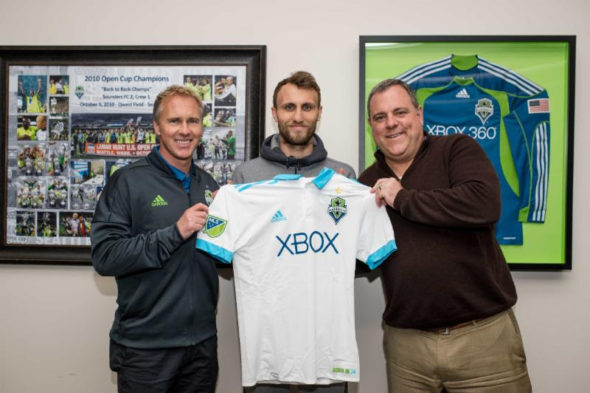 The Sounders Tuesday signed midfielder Magnus Wolff Eikrem, a 27-year-old Norwegian international who comes to Seattle after nine professional years in Europe, in which he was a part of four league titles, including Allsvenskan championships the past two seasons with Swedish side Malmö FF.

“We are happy to sign a player like Magnus with extensive European top-flight experience and a history of winning trophies,” said general manager Garth Lagerwey. “He is the type of player we like to target with these TAM-level signings and we look forward to what he brings to our locker room, in addition to giving us another skilled, versatile option in the midfield.”

Also known by his middle name Wolff, Eikrem began his pro career in 2011 with Molde FK of the Norwegian first division, where he had 68 appearances and six goals in three seasons. He transferred to SC Heerenveen of the Dutch Eredivisie for one season before playing two seasons for Cardiff City, where he made six English Premier League appearances in 2014-2015.

Eikrem moved to Malmö in 2015, where he scored a career-high seven goals in 28 league appearances in his first season before capturing a pair of Allsvenskan titles in 2016 and 2017. He also started four of five appearances in Malmö’s runner-up run in the 2015-2016 Swedish Cup.

“Magnus is a smart soccer player that can play multiple positions throughout the midfield and create scoring opportunities in the final third,” said sporting director Chris Henderson. “We are also very happy to add an experienced player with a winning mentality.”

The midfielder has 17 caps for Norway’s national team, including six appearances in 2014 FIFA World Cup qualifying.

“It is always good to add players with a championship mentality as we attempt to get back to MLS Cup this season,” said coach Brian Schmetzer. “On top of that, healthy competition at every position is good for the team.”

The Sounders leave Seattle Wednesday for a week-long preseason training stint in Tucson The club has games scheduled against the Portland Timbers Saturday and Columbus Crew SC Sunday.