Going from 20 losses to 20 wins in a single season is a Pac-12 rarity, done only four times in conference history. Huskies need to win half their final 10 games to be No. 5. 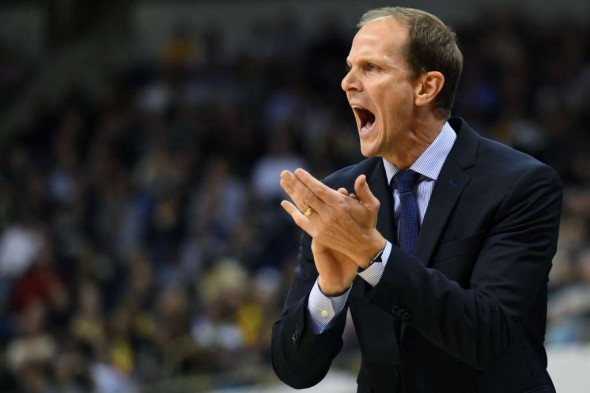 Mike Hopkins and the Huskies are on the verge of conference history. / syracuse.com

In the majority of preseason polls, including the official Pac-12 media prognostication, the Washington men’s basketball team  finished 10th, 11th or 12th. It was no .surprise at all, since the Huskies were coming off a 9-22 embarrassment despite employing the No. 1 overall pick in the NBA draft, freshman Markelle Fultz. Never had any college team lost 20-plus games with the pending No. 1.

A radio broadcaster from San Jose, who shall remain unidentified, best expressed the majority sentiment about the 2017-18 Huskies when he noted, “New head coach Mike Hopkins won’t have Markelle Fultz or Michael Porter Jr. In fact, he won’t have much of anything. The bottom of the conference is muddled enough that UW could avoid a double-digit finish, but ninth place would be the ceiling.”

Instead of wallowing at the south end of the standings, Washington is ahead of Arizona State (16-5, 4-5), ranked No. 25 in the country this week by the Associated Press and No. 23 in the USA Today coaches poll.

The Huskies have 10 games remaining and a chance to turn last year’s 22 losses into 22 wins. That’s a stretch, but the Huskies need only five victories in 10 games to get to 20. If Washington makes it, that will represent one of the greatest one-season turnarounds in conference history, which dates to the 1895-96 season for most league members, including Washington.

If Washington follows last year’s 22 defeats with 20 or more wins this year, it will mark the fourth time in league history that a team has pulled off such a feat (the Huskies are included in the chart for comparison purposes):

Perhaps the biggest surprise is that Campanelli, Sendek and Robinson all received chances to win 20 games after losing 20. Sendek, in fact, twice had the opportunity during his years (2006-15) at Arizona State.

Sendek delivered his first turnaround in 2007-08 after successfully recruiting James Harden, who became a first-team All-America (25 points in a 77-63 win over UW Feb. 23, 2008) and is now a five-time NBA All-Star. Sendek’s 21-loss season in 2012 was greased when he dismissed his leading scorer, Keala King, for undisclosed reasons as conference play was about to begin. Sendek is now head coach at Santa Clara.

Hopkins, who joined Washington from Syracuse within days of Romar’s ouster in March, will get a strict test when his Huskies host the desert schools this week; No. 25 Arizona State at 8 p.m. Thursday and No. 9 Arizona Saturday at 7:30 p.m., both on Pac-12 Network).

Washington has yet to play either school. An upset win over the Wildcats would give Washington a second triumph over top 10 opponents (Kansas lost to UW 74-65 in December but has risen to No. 7 in the Associated Press poll and No. 6 in RPI rankings).

So the Huskies have wins over two of the 10 teams they will face before the Pac-12 tournament, and six contests against teams mired in the bottom half of the standings.

Whether that can translate into an NCAA Tournament appearance depends on how strongly the Huskies finish.

With 10 to play, the Huskies find themselves in this situation: In RPI (Ratings Percentage Index), a major metric employed by the NCAA to evaluate teams, UW is 50th by the NCAA and 49th by ESPN. Washington has three victories — Belmont, Kansas and USC — over teams ESPN projects will make the NCAA Tournament. This week, ESPN ranks the Huskies among the “First Four Out” teams.

Even if Washington fails to make the tournament, even if the Huskies go 0-10 down the stretch, which seems unlikely, Hopkins already has orchestrated one of the most remarkable one-year turnarounds in school history.