Sherman feels good; will be his own agent

At the Star of the Year program, Seahawks CB Richard Sherman said he still needs bone spurs removed from his left heel. Also, he will represent himself in contract talks. 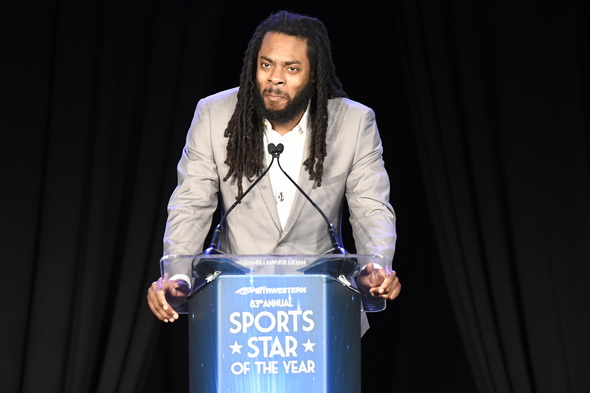 Richard Sherman was a presenter at the Star of the Year program at the Seattle Sheraton Thursday. / Alan Chitlik, Sportspress Northwest

Richard Sherman sounded mostly upbeat about his health. But he has yet to undergo a procedure to remove bone spurs on his left heel after his right leg nears recovery from surgery to repair an Achilles tendon he ruptured Nov. 9 that ended his season.

“It feels great — I was more ahead of schedule than they thought I was,” he said Thursday night. But the bone spurs “will slow me down a little bit.”

In his first local interview since the season ended — he was a presenter for award winner John Clayton at the 83rd annual MTR Western Sports Star of the Year at the Seattle Sheraton Hotel — Sherman said he expects to begin running in late April or early May, but thinks the Seahawks will hold him out of mini-camp in June as a precaution.

He laughed over finally ridding himself of the post-surgery knee cart: “That was a bad day,” he said. “I burned my suit.”

On the topic of the Seahawks coaching changes that included the firing of defensive coordinator Kris Richard, Sherman called it “kinda odd — I didn’t see it coming. But we don’t know everything.”

He said he and Richard were in touch throughout the off-season, when Richard Jan. 22 accepted a job with the Dallas Cowboys as defensive passing game coordinator.

“He had offers,” Sherman said. “We had a very open dialogue about the offers he was getting. Thank goodness he had a ton of respect around the league. He picked the one that he felt suited him best. I was happy for him.”

Regarding his own situation, Sherman is entering the final season of his contract. Asked if, since the Seahawks could save $11 million against the cap without his salary, there was any question he would be back for 2018, said, “Not in my mind. Just get healthy and get back after it.”

He disclosed that he was going to represent himself in negotiations with the club about an extension, feeling he no longer needed the services of agent Ben Dogra or anyone else.

“The whole agency thing is really overrated,” he said. “I can speak for myself. My resume is what it is. I plan on playing for five or six more years.”

He said he’s had no contract talks yet with the Seahawks, but said his injuries will have no impact.

Regarding teammate FS Earl Thomas, who said at the Pro Bowl that he was considering a hold-out if he didn’t get a contract extension done before the season, Sherman was bemused and skeptical.

“Earl is not going to hold out,’’ Sherman said, smiling. “He said it, so you don’t have to dig into it. Just like Earl said he was retiring” in 2016 after he broke his leg.

“You can always read too much into Earl. He loves football, he loves the game and obviously he is making $8.5 million a year and the top player at his position is making $14 million. So being the competitor that he is, he wants more, out of respect more than anything.

“It’s kind of disrespect. He feels he is the best in the game and he is being paid like the seventh or eighth. But I expect him to be on the field when it’s time.’’

Sherman said the other member of the Legion of Boom, SS Kam Chancellor, is “in great spirits” but Sherman has no sense of Chancellor playing future after a neck injury ended his season in December.

“He and his wife are traveling around,’’ he said. “They went to Italy, New York at some fashion show. Everything is just testing. He has to go back and get an MRI every couple of months, so there’s not much he can do, like any rehab.

“He can do the healing. So just have to make sure the pictures look OK.’’