Tommy McVie benefited from many assists by Guyle Fielder, and is now assisting Fielder on the promotion of a new book about the Seattle hockey icon. 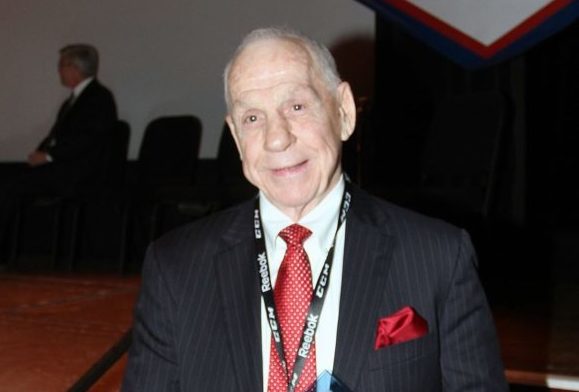 Tommy McVie grew up in a nearly destitute family in the Consolidated Mining and Smelting company town of Trail, B.C., finally escaping it as a teenager with a single used hockey stick and pair of skates paramount among his few possessions. Now in his 80s, McVie can reflect on 21 seasons as a pro with eight franchises, 28 more as a coach — nine as a head man in the National Hockey League and World Hockey Association — and 22 spent in service to the Boston Bruins, the majority of those as a scout.

About all of that, Tommy McVie, now one of most colorful residents of Camas, WA., is convinced of one thing:

Fans with knowledge of Seattle’s sporting history are likely to recall that Fielder is the city’s all-time hockey icon. Starting in 1953-54, “Golden Guyle” spent 15 seasons in a Seattle uniform, including 11 with the Totems, whom he led to three Western Hockey League titles and five WHL finals. Fielder topped the league in scoring seven times, was an 11-time All-Star and won six league MVPs. 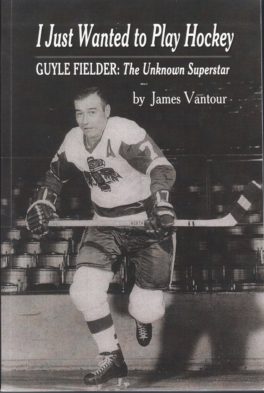 Fielder’s story is documented in a new book, I Just Wanted To Play Hockey / Guyle Fielder: The Unknown Superstar by James Vantour, who spent two years resurrecting one of the sport’s most fascinating stories.

Fans can acquaint themselves with the details in two ways. Friday, Fielder will be featured at a benefit luncheon from 11 a.m. to 1:30 p.m. at the ShoWare Arena in Kent.

Saturday, Fielder will make an appearance before the Seattle Thunderbirds-Everett Silvertips game at ShoWare  to autograph copies of the book, for which McVie is acting as the self-appointed tub-thumper. (For more information, contact Marc Blau at 253-677-2872 or at mhblau@comcast.net).

“First off, the book is a really, really good read,” said McVie, who borrowed a truck earlier this week in order to transport 500 copies to a book signing near Portland, where both Fielder and McVie spent time during their Western Hockey League careers.

“And I’m trying to help out because I’d do anything for Guyle because he did so much for me,” McVie added. “When I met him, I didn’t know where I was going. I wasn’t educated and I didn’t have a trade. What I had going for me was that nobody tried any harder. Fielder taught me how to play the game and he taught me how to be a pro.”

McVie played for a junior club in Prince Albert in 1954-55 and for the Toledo Mercurys of the International Hockey League in 1956-57 and 1957-58 before trying to make the Seattle Americans as a walk-on. He didn’t get much of a shot, getting into three games playing on a line with Dennis Olson and Rudy Filion. He notched a couple of assists.

“They (the Americans) kicked me out of there and I went back to Toledo,” he said. “My game started to come around and I came to camp the next year (1958-59, with the newly christened Totems). There were better players there than me, but they had to keep two rookies.”

One day, head coach Keith “Bingo” Allen took McVie aside and asked him if he could play right wing, a position where the Totems needed help. McVie said he could, even though he never had.

“I think they were getting ready to send me back to Toledo,” said McVie. “But the right winger kept going offside. I never went offside because I wasn’t fast enough to go offside.”

McVie ended up on a line with Fielder and Val Fonteyne and scored 26 goals with 23 assists in 50 games. At the time, McVie thought he’d never score 26 goals in a season.

“Hy Zimmerman (who covered the Totems for the Seattle Times) told me not to get too excited,” McVie said. “He told me that a Zamboni (ice-resurfacing machine) could get 20 goals playing alongside Fielder.”

Of McVie’s 26 goals, nine were game-winners, a league single-season record, including the first goal he scored as a professional.

McVie spent three seasons with the Totems, tallying 27 goals and 44 assists in 1959-60 and 33 goals and 32 assists in 1960-61. Ahead of the 1961-62 season, the cash-challenged Totems dealt MvVie to the Portland Buckaroos, ending his involvement with Fielder as a teammate.

“I didn’t want to leave,” said McVie. “So now I go to Portland thinking that without Guyle I’m done. But he taught me good, and what he taught me stuck in my head. So that first year in Portland I score 45 goals, second-most in the league. And over a span of seven years, only three other pro players scored more goals than than me, Tommy McVie.”

McVie served as a player/coach for the Johnstown Jets of the Eastern Hockey League in 1972-73 and in the same capacity for the Dayton Gems of the International Hockey League in 1973-74 beforebecoming into a full-time coach with Dayton in 1975-76. He won a lot of games and was hired by the NHL’s Washington Capitals in 1975-76 as a replacement for the fired Milt Schmidt, who began that campaign with a 3-28-5 mark. Under McVie, the Capitals lost their first 11 and finished 11-59-10.

“Hard to win the Kentucky Derby with a bleeping mule,” McVie advised The Washington Post about that club.

The Capitals also washed out the next two years, going 24-42-14 and 17-49-14. As McVie ended his run with the Caps on the end of a thumb in 1978, Jack Mann, writing in the Washington Post, called the Caps, “the least successful aggregation of professional game players in the history of the jockstrap.”

Mann may have been premature in that assessment. As he wrote, the Mariners had just turned two years old and were embarking upon the second of 15 consecutive losing seasons.

McVie moved to the Winnipeg Jets of the WHA in 1978-79 and won a league championship. After three years with the Jets, he coached in the minors for a decade before getting his second shot as an NHL head coach with the New Jersey Devils. He directed two playoff teams, but still received a thumbing, and then moved to the Boston Bruins first as an assistant coach and then in an executive/scouting capacity.

“I wouldn’t have gone anywhere in hockey without Guyle Fielder,” said McVie, whose name was etched on the Stanley Cup in 2011 after the Bruins won their first title in 39 years. “I played a lot of years, scored a lot of goals and coached a lot of teams, all because of him. He taught me so much, mostly about dedication.”

“One day,” said McVie, “this guy’s interviewing me and he says, ‘I’m looking at your bio as a player and it says you were traded five times. And it says you’ve been fired seven times as a coach.’ He says to me, ‘You ever thought of quitting?’ I said, ‘Hell, no, hockey’s the only thing I’m good at.’ ’’