Sounders reaching around the globe in 2018

An improved scouting network, a center back from South Korea, and a freed-up international player slot illustrate a fresh Sounders plan to go global. 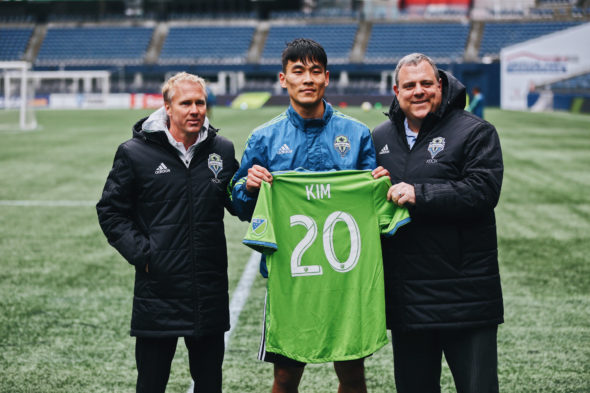 The Seattle Sounders went through their annual media day at CenturyLink Field Wednesday, demonstrating through discourse and action that the club still seeks for 2018 to be one of the most visible clubs in the world.

The global design was underscored Tuesday by the signing of South Korean center back Kim Kee-hee from the Chinese Super League’s Shanghai Shenhua using targeted allocation money. Kim, 28, will bolster depth at center back after the Chinese club cut him due to roster restrictions on foreign players.

The Shanghai team is the same one that hired away from the Sounders Obafemi Martins, who endorsed the Sounders to Kim.

“We’re excited to add Kim to our roster,” general manager Garth Lagerwey said in a club statement. “He brings solid experience from some top-flight leagues and international tournaments and gives us more depth at a vital position. We’ve been fortunate that our international signings over the past few seasons have improved our team and we’re looking forward to continuing that trend with Kim.”

Indeed, the signing of Kim is an example of a new strategy of global thinking made possible by an MLS-mandated increase in targeted allocation money, which allows clubs to compete for players that it would otherwise lose to other, richer leagues.

“This year our scouting department has grown,” Henderson said Wednesday. “We’re able to have a full-time scout in Europe. A full-time scout in South America. A scouting manager and then scouting all the way through at the academy age. That covers every point in our organization in the teams coming up, and developing our players.

“At the beginning of this season, we were able to bring scouts together and have a scouting symposium so people know the culture of the club, the vision of the club, who we are, and what kind of players they’re looking for. If we can do that one or two times a year, it will help us decide which targets we’re going to go for and make sure we’re going to get it right.”

A global approach will help in the search for a replacement for homegrown forward Jordan Morris, who will miss the 2018 season after tearing his ACL Feb. 22 in a CONCACAF Champions League match in El Salvador.

Lagerwey said while the club had not been searching for a forward with Morris’s characteristics, the injury’s severity dictates a pivotal fix. Whether it is done while the winter transfer window remains open until May 1, or after the summer window opens July 10, is a secret only the board room can answer.

Lagerwey saved the most titillating news for last: Panamanian center back Roman Torres has officially acquired his green card and will no longer occupy an international roster slot.

The news caused a stir in the press conference. The freed-up space for a foreign player would greatly ease the search for a new striker to attempt to replace the 2016 MLS Rookie of the Year.

In their attempt to stay at the forefront of the soccer-consuming experience in the U.S., the Sounders have an historic deal with online streaming service YouTube TV to provide webstreams of all Sounders games.

The multi-year deal comes one day after the club renewed its over-the-air partnership with Q13 Fox and JoeTV, and is aimed at providing an opportunity for the increasing population of cable cord-cutters to watch Sounders matches live. The stream will be available in Spokane, King, Pierce and Snohomish counties.