The Seahawks go large on the O-line, signing 345-pound D.J. Fluker to a one-year contract. His position coach with the Giants was Mike Solari, Seattle’s new line coach. 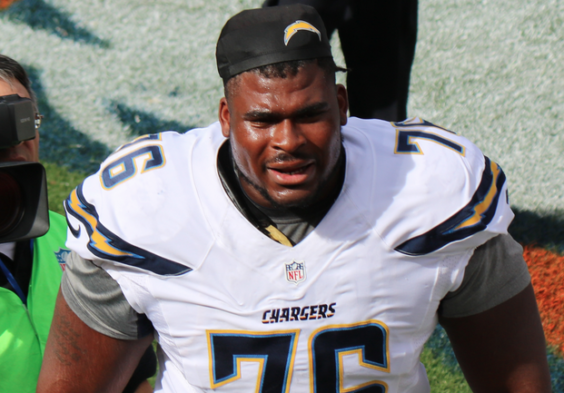 D.J. Fluker’s 2017 season with the Giants was cut short by a toe injury. / Wikimedia

Mostly in pursuit of depth in free agency, the Seahawks seemed to have acquired a starter Tuesday when they signed D.J. Fluker, who played nine games with six starts for the New York Giants last season after signing a one-year, prove-it deal. Fluker’s six starts came at right guard. His season ended in week 11 when a damaged toe put him on injured reserve.

Fluker has played right guard and right tackle. The Seahawks have a vacancy at left guard, where last season’s starter, Luke Joeckel, is a free agent who was not asked back. The Seahawks options may include moving second-year right guard Ethan Pocic to the left side.

The 27-year-old Fluker, an Alabama alum also sought by the Indianapolis Colts, is 6-foot-5 and 345 pounds. He joined the NFL as San Diego’s first-round draft pick in 2013 (11th overall). As a rookie, he made Pro Football Weekly’s All-Rookie team, spending most of the season at right tackle.

A first-team All-America for the Crimson Tide in 2012, Fluker started 59 games for San Diego through 2016. The Chargers released him in March 2017, deciding that his $8.8 million salary for 2017 wasn’t going th happen again. Fluker signed a one-year deal with the Giants for $3 million, but was not offered a contract for 2018 because the Giants believed he wouldn’t fit within their cap space. Joeckel made $7.1 million last year.

During his time in New York, the Giants averaged 110 rushing yards per game when Fluker started, and 25 fewer rushing yards when he didn’t.

Fluker gained a bit of fame when he appeared in the commercial that debuted during the Super Bowl telecast featuring Eli Manning and Odell Beckham Jr. in a parody of the film Dirty Dancing.