The Mariners’ health curse continues: RHP David Phelps, a key set-up man, will have Tommy John surgery and be lost for the season. 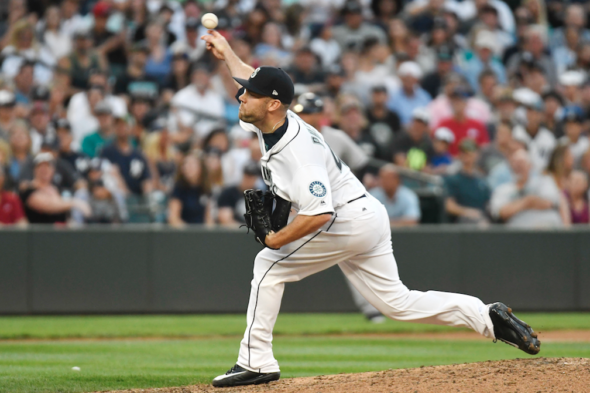 David Phelps made 10 appearances last season, and was hurt during his fifth appearance in spring. / Alan Chitlik, Sportspress Northwest

David Phelps, one of the key members of the Mariners bullpen, has been lost for the season with an elbow ligament tear that will require Tommy John surgery, the club announced Wednesday during the Mariners spring training game against Milwaukee in Peoria, AZ.

Anyone thinking that the Mariners’ bad luck with pitching health was over needs to reassess.

In his fifth spring outing Saturday, Phelps, 31, felt the injury to his ulnar collateral ligament on his final pitch of the inning. Typical recovery time after the surgery is 12 to 15 months.

“There’s no way to sugarcoat it,” general manager Jerry Dipoto told MLB.com. “He’s a big piece of what we’re doing here, and it’s a big loss for us. He will feel it, his teammates will feel it and we’ll feel it. The good thing is we do feel we have some depth to work back from, but it won’t be an easy spot to fill. There’s a reason we went and got him, a reason we were excited for his return. He’ll be missed.”

After his midseason acquisition last year from Miami for four minor leaguers, Phelps had an elbow impingement problem that sent him twice to the disabled list, where he finished the season. He pitched 8.2 innings over 10 appearances with a 3.12 ERA.

Phelps figured to share set-up duties with newcomer Juan Nicasio ahead of closer Edwin Diaz in a bullpen that was considered a team strength.

The Mariners earlier this spring released another hard thrower, Tony Zych, who couldn’t shake arm problems. Another right-handed reliever, Nick Rumbelow, acquired from the Yankees in the off-season, has a neck problem and his return is unknown.

The Mariners open the season at 7:10 p.m. March 29 against the Cleveland Indians at Safeco Field.