A solid start Saturday in spring training for Felix Hernandez earned him his 10th consecutive start for the Mariners’ opener Thursday. 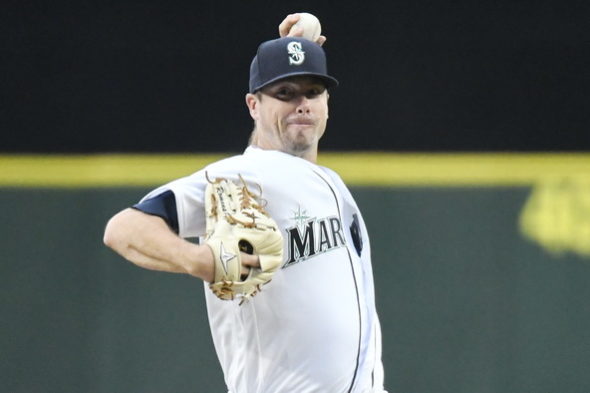 Wade LeBlanc is back with the Mariners. / Alan Chitlik, Sportspress Northwest

The Mariners made a late add to their pitching staff over the weekend, adding veteran free agent lefty Wade LeBlanc, who in 2016 went 3-0 with a 4.50 ERA in eight starts and three relief appearances for Seattle. And after a 63-pitch outing Saturday night in which he allowed a single run, Felix Hernandez won his bid to be the Opening Night starter at 7:10 Thursday at Safeco Field.

Also, 1B Dan Vogelbach, whose spring training numbers looked like what GM Jerry Dipoto had in mind when he gave up a good pitcher in 2016, Mike Montgomery, to the Cubs for the square-bodied slugger, was told Sunday he had made the 25-man roster.

Hernandez wasn’t great, but in his first start since he was struck Feb. 26 on his right forearm with a line drive, the only run came on a wind-blown homer on the game’s first pitch. He gave up three other hits, had three strikeouts and  a walk. Afterward, he pronounced himself ready.

Until Saturday, Hernandez pitched only 1.2 innings before the injury, so he’d likely be on a strict pitch count. Manager Scott Servais will go early and often to his bullpen, where he’ll have LeBlanc, 33, in long relief.

The acquisition was a partial response to the loss of reliever David Phelps, done for the season after an elbow ligament tear that will require Tommy John surgery.

LeBlanc, invited to the Yankees camp on a minor league contract, was cut Friday after seven games, in which he pitched 13.2 innings and had a 5.27 ERA. In 2017, he was a reliever for the Pittsburgh Pirates, making 50 appearances with a 5-2 record and 4.50 ERA.

Entering Sunday’s game against San Diego, Vogelbach was hitting .388 with a .505 on-base percentage, including five homers and 12 RBIs. He will share first base duties with Ryon Healy, who likely will get the start Thursday despite getting only 12 at-bats through Saturday because of injury. 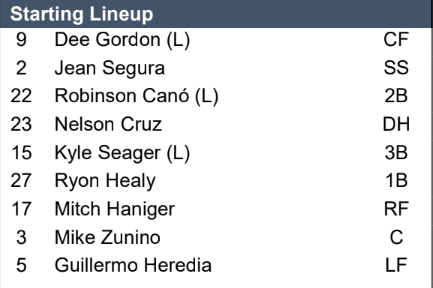 After Hernandez, the Mariners’ starting rotation will be James Paxton, Mike Leake and Marco Gonzales. Because of off-days, the Mariners likely won’t need a fifth starter until mid-April. The likeliest candidate, Erasmo Ramirez, who missed most of spring training with a strained oblique muscle. He returned to throwing over the weekend. If he’s not ready, the Mariners could go to LeBlanc. Either Rob Whalen and Ariel Miranda, both of whom had good springs, could be called up from AAA Tacoma   . . .  Ichiro, brought back to Seattle after early spring injuries in the Mariners outfield, had been held out of the lineup for three days prior to Sunday after being struck on the back of the batting helmet by a pitch. He passed concussion protocols, according to Servais. A previous calf injury has limited him to seven at-bats, none of which included a hit . . . The sellout of 12,601 Saturday boosted the club’s concluded 16-game spring attendance to 118,851, an average of 7,428. The club record total of 145, 146 was set in 2002.