The longtime girlfriend of backup QB Trevone Boykin said he broke her jaw on both sides and strangled her. He denied the claims, but the Seahawks fired him. 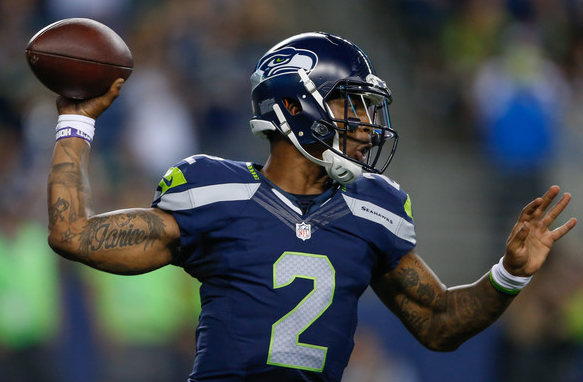 After a claim of assault by his girlfriend, the Seahawks cut Trevone Boykin, who denied the claim. / Seahawks.com

The Seahawks released backup QB Trevone Boykin Tuesday morning after Dallas TV station WFAA reported that he was being investigated for assaulting his girlfriend in his hometown of Mesquite, TX., an attack a week ago that left her with a jaw broken on both sides and strangulation marks on her neck.

The Seahawks announced Boykin’s release in a tweet. Boykin later released a statement to NFL Media denying all her claims. TMZ reported that Mansfield police investigating the episode said Boykin would be charged with felony aggravated assault.

Shabrika Bailey told the station the two had been in a relationship since high school. She said she was at his home when they began arguing over a text message on her phone that she refused to unlock for him.

Bailey was airlifted to Dallas’s Parkland Hospital, where she spent three days before being released.

Bailey said she was involved in another assault episode with Boykin. She was the driver of the car in March 2017 that backed into a wall of a Dallas night club, injuring several pedestrians. For the first time, she disclosed the accident was the result of an assault by Boykin, who was sitting in the back of the car.

“He leaned over, attacked me, and choked me unconscious, which made the car go into drive to reverse,” she said. Asked why she said nothing when she was charged with intoxication assault a year ago, Bailey said, “I was scared. I was just scared. Terrified, of everything. . . It just can’t keep going on. He just can’t get away with this. This is serious. This is domestic violence.

“You can’t keep doing this, it’s not cool, to constantly, like, make me the victim and you get away with it. Something has to happen because right now [he’s] just consistent with it. Like he can get away with it and nobody ever know.”

Boykin, 24, spent the past season on the practice squad and was not active for any game, but was re-signed by the Seahawks in January.  Austin Davis was Russell Wilson’s primary backup, but remains an unrestricted free agent, leaving Wilson as the roster’s lone QB.

In Boykin’s rookie season after he signed with Seattle as an undrafted free agent, he saw action in five games, completing 13 of 18 passes for 145 yards and a touchdown.

Boykin’s college career at Texas Christian University ended in trouble when he was charged with assaulting a police officer after he had been ejected from a San Antonio hotel two days before the Alamo Bowl game, from which he was suspended.

“I understand the Seahawks decision to release me. The story that was reported casts a bad light on the organization and on me.

I want to be clear that the story is false. The police have taken statements from the accuser, another witness and me. All of these statements confirm that I was not involved in the physical altercation.

This woman has lied about me and it has cost me my job. I know guilt by association is real. This person has fabricated a story and I am suffering the consequences.

I will let the legal system run its course and I know I will be vindicated.”