Ichiro, 44, had two hits on the same day Tiger Woods, 42, had a 72 in the third round at the Masters. Those who rage against the dying of the light had themselves a day. 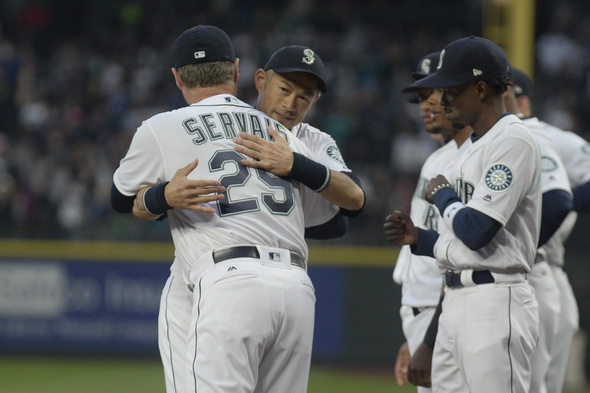 Ichiro was welcomed back at the opener, but for how long? / Alan Chitlik, Sportspress Northwest

At the Safeco Field workout preceding the Mariners season opener, I asked Ichiro how much harder the game is at 44 than it was years ago. He offered a classic Ichiro deflection that was true, but also averted answering question truthfully.

“It was difficult when I started, and difficult today,” he said. “It’s never been easy, never will be easy.”

I thought about that answer this week watching Tiger Woods, at 42, do at the Masters what Ichiro, at 44, is doing with the Mariners — at the pinnacle of sports, fighting back hard against the predation of time on mind and body.

At any age, both games are exceedingly difficult to do well,  given the requirements for precision and the intensity of the elite competition. Although few of us can know from personal experience the degree of difficulty at the top, exactly everyone over 35 can identify with the changes in reflexes, eye-hand coordination and strength that come with the passing of seasons.

Beyond whatever personal affection fans have for each athlete, Woods and Ichiro are now much more intense objects of fascination because they brazenly seek to regain what all of us in some form will lose, and they don’t care about the skepticism of others.

Woods is amid a remarkable personal renaissance this weekend at Augusta National. His par 72 Saturday left him at four-over 220 through three rounds. He was never a serious threat to the leaders, but he made the cut Friday in the world’s toughest tourney field.

It wasn’t up to his previous Masters standards, but it was a spectacular climb from 10 months ago.

On May 29, West Palm Beach police charged Woods with a DUI after they found him asleep behind the wheel of his car in the middle of the road. The toxicology report showed five drugs, including two opioids, he used to manage pain and sleep problems following four back surgeries and numerous other injuries. The arrest video looked so pitiful that many assumed his career was unrecoverable.

But Woods underwent treatment to manage the meds, his back healed and he began playing well enough in several 2018 tour events to get his fan base dewy-eyed about Augusta.

“Six months ago, I didn’t know if I’d be playing golf,” he said Friday after he made the cut. “Forget playing at the (PGA) tour level, I didn’t know if I’d ever play again. But it’s incredible to have the opportunity again, to still come out here and play this golf course. Now I know I’m on the weekend.”

The tourney Sunday won’t have the Hollywood ending nearly all of the golf industry and CBS wanted. But Woods’ recovery into competitive legitimacy was a bonus unimagined 10 months ago. Whether it’s purely his golf, or his health or his love life, Woods remains perhaps sports’ most compelling figure.

The rally against age is more awkward for an athlete in a team sport. Unlike a golfer who is an independent contractor, the hire of an aging baseball player often denies playing time to a younger player.

Ichiro Saturday had two singles and scored a run in Seattle’s 11-4 win over the Twins in the coldest game (27 degrees) in Target Field history. He’s hitting .263 (5 for 19). But in the sixth inning, he miscalculated on two drives over his head. Both became doubles to produce the Twins’ first of three runs and helped chase starter Mike Leake.

Although not errors, the misplays weren’t the first field-judgment questions since his surprise re-hire March 7. His defensive vulnerabilities loom larger than his offense.

Since his March 2 oblique strain, starting LF Ben Gamel finally has returned to play in minor-league rehab games. Manager Scott Servais told reporters before the game Saturday that he thinks Gamel, as well as DH Nelson Cruz and C Mike Zunino, could rejoin the club for the start of a seven-game homestand Friday.

Gamel’s absence prompted the Mariners to answer the persistent calls from Ichiro’s agent. The rationale was that since Gamel’s injury was short-term, and the Mariners had no outfielders on the farm worthy of a call-up, hiring Ichiro would be an inexpensive patch. Plus, there was sentiment. Always, there is sentiment.

But there is also an end to sentiment.

A healthy Gamel likely means there’s no room on the roster for Ichiro. Thus comes the team-sports downside. Given Ichiro’s compulsive devotion to the routine of baseball and his unshakeable belief in himself, it seems unlikely that he would retire.

So he would have to be cut without ceremony. The potential for such an awkward denouement is largely why Ken Griffey Jr. rolled on into the night in the spring of 2010, driving away from Safeco Field without warning, once he realized his play couldn’t justify a roster spot.

That is the consequence of not going out on top. A thunderous resolved chord is never promised when a sports hero wraps it up. The pending absence of the ta-dah moment merely adds to the fascination.

Then again, we all should be Fred Couples. At 58, the Seattle golf legend finished the third round Saturday at Augusta at 219, one stroke ahead of Woods.

Ichiro is right. It is never easy. But somehow, one guy keeps offering the counterpoint.