Thiel: McDowell a bust that will be felt for years

The Seahawks are reportedly ready to waive Malik McDowell, whose non-football injury absence cost the team dearly. It makes him the worst draft bust in club history. 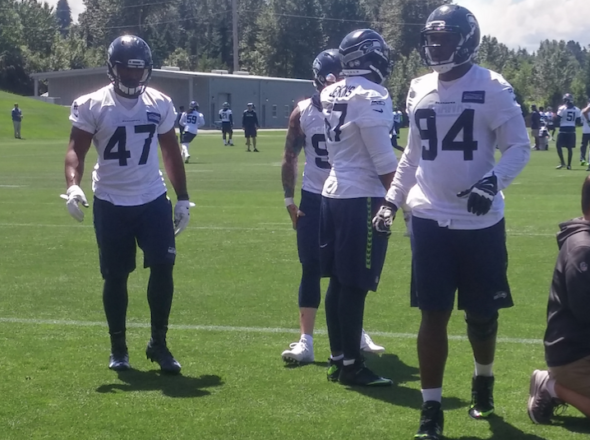 A rare sighting of Malik McDowell (94) in a Seahawks jersey in June before his injury. / Art Thiel, Sportspress Northwest

Where does the long-tenured Seahawks fan rank the high draft selection last year of Malik McDowell? Ahead or behind Aaron Curry or  Jerramy Stevens? Where is the pick in relation to Rick Mirer and Dan McGwire? How about Owen Gill? Or the first draft pick in the 1976 expansion season, Steve Niehaus?

You may not recall a lot of those names or their immensely modest deeds. But it’s a fairly safe bet that McDowell’s name will hang around the career necks of Pete Carroll and John Schneider until the warming seas reach the observation deck of the Space Needle.

Ian Rapoport of NFL Media, the league’s house organ, reported Monday afternoon that the Seahawks shortly will waive their first choice in their 2017 draft (second round, 35th pick overall), merely to be rid of the once highly regarded defensive end from Michigan State.

Much mystery has surrounded McDowell since his ATV accident in July in his home state left him with a “very bad” concussion, according to Carroll. That’s about the only information put out by the club about the episode. No report of any legal problem has surfaced, nor was there any report of injuries to others.

Carroll said last month at the league meetings said that he had no news on McDowell, including whether he has been cleared to play.

“We get information rarely in his case,” he told reporters, “but there will be a time when you will hear more.”

Rapoport wrote that “the primary question today is whether or not he’ll be healthy enough to catch on with another team.”

Rumors have circulated about an effort by McDowell’s family to keep all of the $3.19 million signing bonus he received as part of his four-year, $6.95 million deal. Whether there is a settlement pending for the non-football injury isn’t known, but OverTheCap.com reports that if he is cut now, McDowell will count $3.65 million in dead money against the salary cap in 2018, and $2.07 million in 2019.

Bad as is the salary cap hit, worse was the fact that they had to compensate for the absence of McDowell at the start of the 2017 regular season by trading for DT Sheldon Richardson. They gave the New York Jets WR Jermaine Kearse and a second-round choice in the draft beginning April 26.

Although he played well enough that the Seahawks wanted to keep him, Richardson, 27, left in free agency for a one-year, $8 million deal with Minnesota. The Seahawks reportedly offered $6.5 million.

The other loss, the second-round pick, is sufficiently severe that the Seahawks are considering trading All-Pro FS Earl Thomas to get one or two high picks.

The ripple effects of McDowell’s foolishness may well qualify as a personnel calamity for the Seahawks.

Which is why his selection arguably qualifies as the Seahawks’ all-time draft bust. At least all the other top selections in Seahawks history played a little. For McDowell, the Seahawks get less than nothing.

It was easy to see why the Seahawks liked him — a 6-6, 295-pound D-lineman who runs a 4.85 40-yard dash is going to cause unseemly salivation among all NFL general managers. But at 20 in his junior season, he was maddeningly inconsistent, and every single one of those GMs took a first-round pass on McDowell likely because of character issues and immaturity.

Analyst Mike Mayock said on NFL.com, “I’ve had an awful lot of coaches say if we can unlock the potential in this kid, we can have something special. Pete Carroll has always done a great job of taking these types of guys and getting the best.”

The Seahawks traded back twice from their original choice at 26 and picked up additional choices, then bragged about McDowell’s potential.

“We had extensive meetings with this guy to figure him out,” Carroll told ESPN 710 in May. “He loves to play and isn’t a flashy guy. He has tremendous upside in a body frame that’s much different than the guys we’ve had.

“The instincts he shows to find the football and make plays is something that gives us a chance to have a really special player. He’ll play five-technique like Michael Bennett does and be featured as an inside rusher in the nickel group. If Malik can add to Michael [Bennett] being the other tackle, he’ll be a huge addition.”

But by July, he’d flipped his ATV and took a severe blow to the head. The season was lost, and by December, so was he. McDowell was arrested outside a nightclub in Atlanta in a dispute over a bill and charged with disorderly conduct. The video of the arrest went straight to TMZ and did him no favors.

He wrote an apology that was released by the team:

“I am embarrassed by the situation and my actions on Saturday. I would like to apologize to the Atlanta Police Department, SL Lounge, the entire Seattle Seahawks organization and my teammates. I am a young man who made a mistake and am constantly working towards getting better.”

Carroll addressed the media, saying, “He got in a situation and made a mistake and hopefully this will be a learning experience for him.

“I know he felt really bad representing in that manner . . . I think we’re definitely going work to help him in every way that we can. We’ve already talked about that; and let’s hope that this isn’t an indicator of things to come. I hope that he has turned with this experience. He sounds very much intending to do that, and we’ll see what happens.”

Apparently, we’re seeing what’s happening, and it seems as if the Seahawks are done helping him.

Generally speaking, any team cannot be held entirely to blame for a 21-year-old kid doing a knucklehead thing in the summer after he became abruptly wealthy. But there were warning signs. The Seahawks bosses thought they could coach around them. McDowell’s reckless immaturity didn’t give them the chance. As the arrest video showed, no lessons about humility were learned.

When he gets cut, McDowell goes to the top of the Seahawks’ list of bad draft decisions.