Turns out Dee Gordon made a key steal of second base Sunday despite a broken big toe. He’s out likely several weeks; Mariners bring up Vogelbach to rest Cruz. 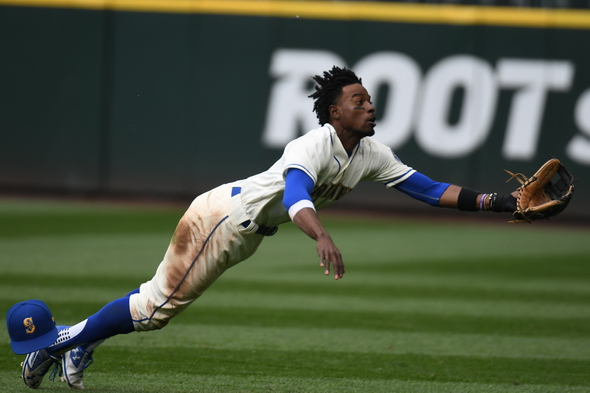 The Mariners’ injury travail, a runaway train in 2017, is picking up speed again. This time, it’s leadoff hitter Dee Gordon, likely out several weeks with a fractured big toe. He’s been the early season MVP for the 27-19 club, hitting .304, leading the American League in stolen bases (16) and playing good defense in center field. He returned Friday to play second base, his original MLB position.

The Mariners put him on the 10-day disabled list, though bone fractures take much longer than that to heal. His immediate roster replacement is 1B/DH Daniel Vogelbach, who won’t be asked to turn the double play at second.

Called up from AAA Tacoma, Vogelbach was hitting .301 with a 1.159 OPS. He had nine home runs, 15 RBI and only 10 strikeouts to go with 22 walks. In the lineup, he’ll likely replace at DH Nelson Cruz, who recently has been hit on the right foot and the left elbow by pitches. Cruz could use time to heal during the three-game series that was to begin at 7:05 p.m. Tuesday in Oakland against the A’s (25-22).

The Mariners were already missing 2B Robinson Cano, after his self-inflicted wound of an 80-game suspension following a violation of baseball’s drug policy. This week, they likely will be down to nine-year veteran Andrew Romine, 32, who has five hits in 34 at-bats (.145).

May 9 in Toronto, Gordon hit a foul ball off his right great toe, but continued to play. Early in the game Sunday, a 3-2 win over Detroit, Gordon aggravated the injury during a play at second base. Yet in the decisive ninth, he managed to steal second base, from where he scored on SS Jean Segura’s game-winning single. Given the injury, the stolen bag was even a greater accomplishment.

His absence means the Mariners are without their offensive igniter, along with their best hitter in Cano and top slugger in Cruz. But eight games over .500 is a season-high mark.